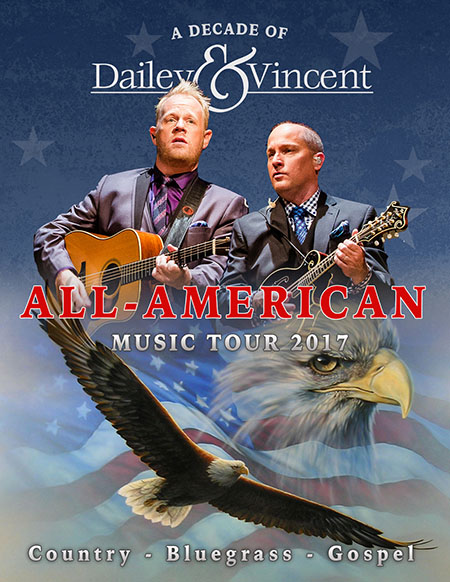 NASHVILLE, Tenn. (December 16, 2016)
– Critically-acclaimed bluegrass duo Dailey & Vincent are set to
kick off their highly anticipated 10-year celebration in true superstar
fashion. They are one of the most decorated acts in the history of the
genre, consisting of 6-time “Male Vocalist of the Year” winner Jamie
Dailey and 5-time Grammy® winner Darrin Vincent. They will be
commemorating the special occasion with a series of events that will
start their year off with a bang.

The celebration will commence on December 30, when the “Entertainer
of the Year” winners hit the stage at the Grand Ole Opry in Nashville,
held at the historic Ryman Auditorium. They will perform a special
star-studded 30-minute Opry segment. The night will also mark the pair’s
100th Opry performance.

“We started our career on the stage of the Grand Ole Opry at the
Ryman Auditorium nine years ago,” says Jamie Dailey. “I describe how
touched and humbled I am to know we will be returning to kick off our
10th year on that same stage. The Grand Ole Opry is like coming home for
us.”

Dailey & Vincent will continue the celebration with another
career first, as they open their own personalized exhibit at the
world-renowned International Bluegrass Hall of Fame and Museum in
Owensboro, Ky. Other legends featured at the prestigious museum include
bluegrass legends Earl Scruggs, Lester Flatt, Ralph Stanley and more.
Fans can stop by and experience “A Decade of Dailey & Vincent – An
American Music Journey,” showcasing artifacts, memorabilia, and other
priceless mementos from their band’s iconic career. The exhibit is set
to launch January 13, 2017 at the original museum location, and will
also be celebrated with an intimate concert performance broadcast LIVE
on SiriusXM’s Bluegrass Junction, followed by a meet & greet and
reception (fans can purchase tickets HERE).

“A dream of ours was to start our career at the Grand Ole Opry in
2007. Ten years later, celebrating this milestone brings overwhelming
feelings of joy and excitement” says Darrin Vincent. “Also, having
another first for us with our exhibit at the Bluegrass Music Hall of
Fame is wonderful. I never thought I’d live to see that. In thinking
about these milestones, I feel too thankful for my family and a lifetime
of love and support they have given to me. My father passed away 2
years ago, but it brings tears to my eyes knowing that he would be so
proud.”

There are plenty of other surprises in store, as the multi-Grammy®
nominated duo kick off what will be a year full of memorable moments.
Fans can stay up to date with the latest Dailey & Vincent news
through the band’s social media platforms, or by visiting daileyandvincent.com.

About Dailey & Vincent:
Five-time Grammy award winners individually, three-time Grammy award
nominees collectively, four-time DOVE Award Winners, and winners of 35
IBMA Awards altogether (including 3-time IBMA Entertainer of the Year
Award winners and 3-Time Vocal Group of the Year Award winners), Jamie
Dailey and Darrin Vincent, backed by one of the best bands on tour
today, are some of the most reputable and elite entertainers in American
music; bluegrass, traditional country and gospel music. The concoction
of the fantastically instinctive vocal blends of Dailey’s tenor and
Vincent’s reedy harmonies, has gained them well-deserved praise for
their own distinctive style and worldwide recognition as American Music
gold. Dailey & Vincent has garnered world-wide attention with their
first national, top-rated television series, “The Dailey & Vincent
Show,” on RFD TV and over 500 airings of their PBS special “Dailey &
Vincent ALIVE ¬ In Concert.” Their most recent CD, Dailey & Vincent
ALIVE, debuted at #1 on the Billboard Bluegrass charts and remained at
the top position for over 15 weeks.