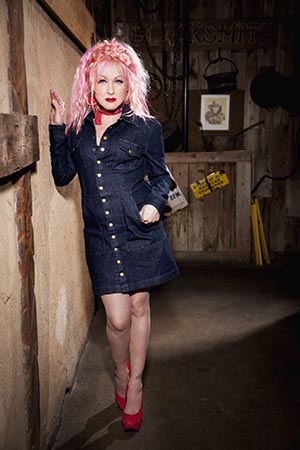 Originally filmed in 2012, STILL SO UNUSUAL takes viewers on
an all-access journey into the personal and professional life of one of
pop culture’s most beloved and influential icons as she juggles her
roles as rock star, mother, wife, Broadway composer, and philanthropist.
With her hectic touring schedule, awards appearances, and recording
sessions, Cyndi’s family life with her husband of now 20+ years, actor
David Thornton (My Sister’s Keeper, The Notebook), and the couple’s
teenage son, Declyn, is anything but “normal.” STILL SO UNUSUAL
explores the life of an artist who passionately pursues her creative
endeavors, work demands and family life without compromising on any of
them. She may be constantly running to keep up, but Cyndi’s true colors
show equally at a glamorous photo shoot and while cheering on Declyn at a
hockey game.

STILL SO UNUSUAL was produced for WE tv by Mark Burnett’s One Three Inc. Mark Burnett and Cyndi Lauper serve as the show’s executive producers.

Known best for her legendary pop icon status, Lauper is reigning in a new legion of fans with her new country-tinged album DETOUR (available here) featuring a collection of country covers from the 40’s, 50’s and 60’s (track listing below). DETOUR,
which debuted No. 4 on the Billboard Top Country Albums chart, features
duets with several special guests, including Emmylou Harris, Willie
Nelson, Vince Gill and Alison Krauss.

About Cyndi Lauper
Cyndi Lauper is a Grammy, Emmy and Tony Award-winning (for her Kinky
Boots score) artist who, after 30 sterling years and global record sales
in excess of 50 million albums, has proven that she has the heart and
soul to keep her legion of fans compelled by her every creative move.
With her first album, She’s So Unusual, Lauper won a Grammy Award for
Best New Artist and became the first female in history to have four
top-five singles from a debut album. Since then, Lauper has released ten
additional studio albums and was recently inducted into the Songwriters
Hall of Fame. Her upcoming 11th studio album, Detour, recorded late
last year in Nashville, will showcase her signature takes on classic
country songs from the 1950’s and 60’s. The album will also feature
appearances by some of country music’s most-celebrated artists including
Vince Gill, Emmylou Harris, Alison Krauss, and Willie Nelson. Overall,
during her storied music career, Lauper has been nominated for 15 Grammy
Awards, two American Music Awards, seven American Video Awards and 18
MTV Awards. She recently captured her journey through music and life in
her New York Times best-selling autobiography, Cyndi Lauper: A Memoir.
As an actress, Lauper made her Broadway debut in The Threepenny Opera
alongside Alan Cumming in 2006. She has appeared in numerous television
shows, including “Mad About You” (Emmy Award) and “Bones” and films
including The Opportunist with Christopher Walken, Mrs. Parker and the
Vicious Circle, Life With Mikey, Off and Running and Vibes. Lauper also
continues her philanthropic work through her foundation, the True Colors
Fund.

About 9Life
9Life is an Australian free-to-air digital television multi-channel owned by Nine Entertainment Co. The channel airs mostly foreign lifestyle and reality programs, with the channel having a licensing agreement with Scripps Networks Interactive for the distribution of many formats.