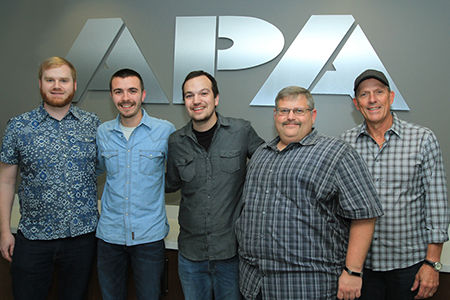 Promising classic country emerging duo, Crawford & Power, have signed exclusive booking representation with APA. The debut EP and single of the same name “Play A Hank Jr. Song” was released to all digital platforms in June 2018 and has been added to Spotify’s 90’s Country (and some 80’s)
playlist. Their unique approach to a fading genre has been lauded as a
breath of fresh air amidst the  commercialization of sacred American
music genres. The two Virginia natives have been on the road opening for
Charlie Daniels Band, The Marshall Tucker Band, Drake White, Joe
Diffie, Luke Combs, Jerry Douglas, Cody Johnson and Chris Knight..

We are honored to be brought on board with such a hardworking agency
that is home to some of our heroes,” said Jake Crawford and Ethan Power.
“We feel like this is a perfect fit for us.”

“APA is excited to welcome the promising new artist duo, Crawford &
Power, to the roster. Jake and Ethan’s undeniable talent, passion and
work ethic are a great fit for our team and core values at APA,” said
Matt McGuire, APA. “We are looking forward to getting them out on the
road to new audiences.”

With roots in country, Americana, and southern rock, Crawford & Power
seek to spawn a classic country music revival with a splash of sweet
iced tea and whiskey. Ethan’s first introduction to music was from his
dad, an accomplished dobro player, who toured with “The Steven Sisters”
in the mid to late 90s. He is influenced by his dad, Ernie Power, Jerry
Douglas, Rob Ickes and Randy Kohrs. Jakes desire to play music grew out
of an inheritance of a slew of bluegrass instruments at a very young
age. Attending a Hank Williams Jr. and Lynyrd Skynyrd show during his
8th grade year was the tipping point that inspired him dust off one of
the guitars that he inherited and learn how to play. Persuaded to attend
an Elton John concert with his mother, he realized that that music is
universal. Good music can bring together different backgrounds, races,
genders and he emptied his savings account and purchased a keyboard and
taught himself to play. The duo met during a public speaking class in
college realizing their common style and musical direction. Mutual
influences include, The Eagles, John Butler Trio, John Mayer, Travis
Tritt, Corey Smith, The Dixie Chicks, Greensky Bluegrass, Jason Isbell,
Sturgill Simpson, Stoney LaRue, and Chris Knight. They started the band
in early 2014 and were fortunate to open for Ethan’s hero, Jerry
Douglas, in their hometown about a month after playing together for the
first time and have never looked back. The two started playing shows
together and have been touring for nearly five years.

APA is one of the largest diversified talent agencies,
with headquarters in Beverly Hills, New York, Nashville, Atlanta,
Toronto, and London. Founded in 1962 by a group of former MCA agents,
the company represents musicians, artists, performers, brands,
intellectual properties and physical production across all media
platforms including music, film, television, theater, publishing and
digital worldwide.