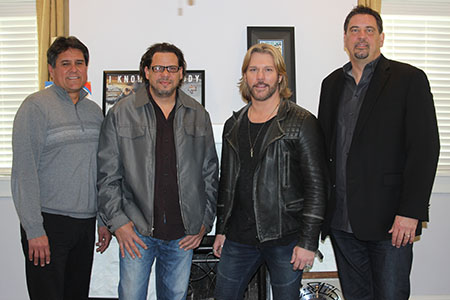 “Craig Wayne Boyd is an artist that his fan base is very passionate
about, and I believe the music he is working on will excite them very
much – in addition to adding many more fans to the fold,” said David
Ross, President/CEO of Reviver Entertainment Group, which encompasses
Reviver Records, Reviver Label Services, Reviver Publishing, Reviver
Productions and 1608 Promotion.

A native of Mesquite, Texas, Craig Wayne Boyd came to the attention
of America as the winner of Season 7 of the NBC hit “The Voice.” During
his run on the show, Craig hit the charts with his versions of such
classics as “Old Rugged Cross,” “I Walk The Line,” “You Look So Good In
Love,” and the Merle Haggard classic “Workin’ Man Blues.” His
post-“Voice” career kicked off with a bang with the release of “My
Baby’s Got A Smile On Her Face,” which topped the Billboard Hot Country
Songs chart. As a songwriter, Craig spent three years as a staff writer
for EMI Publishing.

“Will and I are both excited and fortunate to be working with Craig
and his world-class fan base. With the addition of Reviver, we are
preparing to release Craig’s first LP since since winning ‘The Voice’,”
Harmon said.

Best known for his work with Hootie and the Blowfish, Harmon runs
HARMON Music Management and co-founded Copperline Music Group with Will
Edwards. Edwards is an award-winning composer and producer, whose resume
includes more than 50 gold and platinum albums.

ABOUT CRAIG WAYNE BOYD:
Rooted in the southern tradition of country music and topped with a
rebellious flair, Craig is an extreme talent who excelled at singing and
playing the guitar at age of four. He received long-due critical and
mainstream recognition as the Season 7 winner of The Voice. Taking the
title as a member of Team Blake (Shelton), Craig dazzled the audience
with the premiere performance of “My Baby’s Got A Smile on Her Face,”
which debuted No. 1 on the Hot Country Songs chart, becoming the second
song (following Garth Brooks’ “More Than A Memory”) to ever do so.
Growing up in the Dallas, Texas suburb of Mesquite, Craig’s childhood
was highly influenced by gospel and country music and he later became
the choir director at his hometown church. After a trip to Nashville,
life-changing events came his way. Craig signed a publishing deal with
EMI and after several years of prolific songwriting, he began touring
heavily, logging more than 1,000 shows in four years, and toured with
acts like Jamey Johnson, Randy Houser and Brantley Gilbert. In addition,
Craig also played with Rascal Flatts during their Vegas Riot! nine-show
residency at the Hard Rock Casino in Las Vegas before continuing on his
headlining West Bound and Down Tour. Since winning The Voice, Craig has
been busy touring and recording a new album. For more information,
visit CraigWayneBoyd.com.