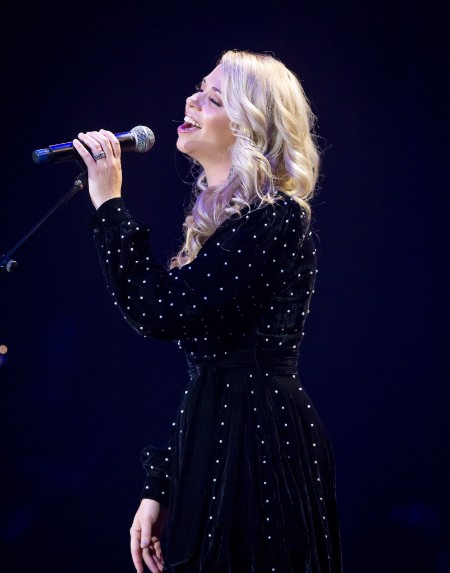 Country music singer/songwriter Sandra Lynn
celebrated a career milestone last night when she made her debut
performance at the historic Ryman Auditorium in Nashville, TN at the
2018 Christmas 4 Kids live concert event. Lynn also took the opportunity
to debut her new holiday single “My Christmas Wish for You” in her
first live performance of the song, further sweetening the moment. The
track was written by Grammy Award-winning, hit songwriters, Linda
Thompson and Richard Marx as well as produced by Grammy Award-winning
engineer and producer, Ben Fowler.

“I cannot put into words how truly magical and special it was to have my
dream come true of performing at the Ryman Auditorium last night in the
company of such incredible artists,and to be welcomed by the legendary TG Sheppard and Kelly Lang,” said
Lynn. “The Christmas 4 Kids organization is doing truly amazing work,
and I’m honored to have been a small part of giving hundreds of kids a
Christmas Wish this holiday season.”

The Christmas 4 Kids’ non-profit concert works to provide
underprivileged children in Middle Tennessee with their very own
Christmas shopping spree. The funds generated by the Ryman concert are
used to give over 400 children from 29 different schools, a day-long
shopping excursion.

Since launching herself as an independent artist in 2014, singer and
songwriter, Sandra Lynn, has established herself as one of country
music’s sweetest rising voices. Lynn began singing at the age of seven
and immediately gravitated toward such iconic artists as Trisha Yearwood
and Dixie Chicks, as well as Shania Twain and Faith Hill. Since then,
Lynn has spent much of her time in Music City with some of Nashville’s
hottest songwriters and hit-makers, including Rascal Flatts’ Jay
DeMarcus, Dave Brainard, Ross Copperman (who produced Lynn’s single,
“Afterparty,” which was picked up by SiriusXM’s The Highway, along with
her song “Bar-Hoppin”), Jeremy Spillman, Hall of Famer members Gary Burr
and Tom Schuyler, Tia Sillers, Victoria Banks, among many others. Lynn
has also made a name for herself on the live circuit, opening for Brad
Paisley, Kenny Chesney, Cole Swindell, Kenny Rogers, Jana Kramer, and
Josh Thompson, as well as performing during CMA Fest at Milwaukee’s
Summerfest, and playing local Nashville venues, including 3rd and Lindsley, The Wildhorse Saloon, and The Listening Room. In 2018, Lynn released her deeply emotional EP, FIGHT, produced
and engineered by Grammy-winner, Ben Fowler which kicked off a
three-part series of EPs documenting the push and pull of a couple
trying to save their relationship.