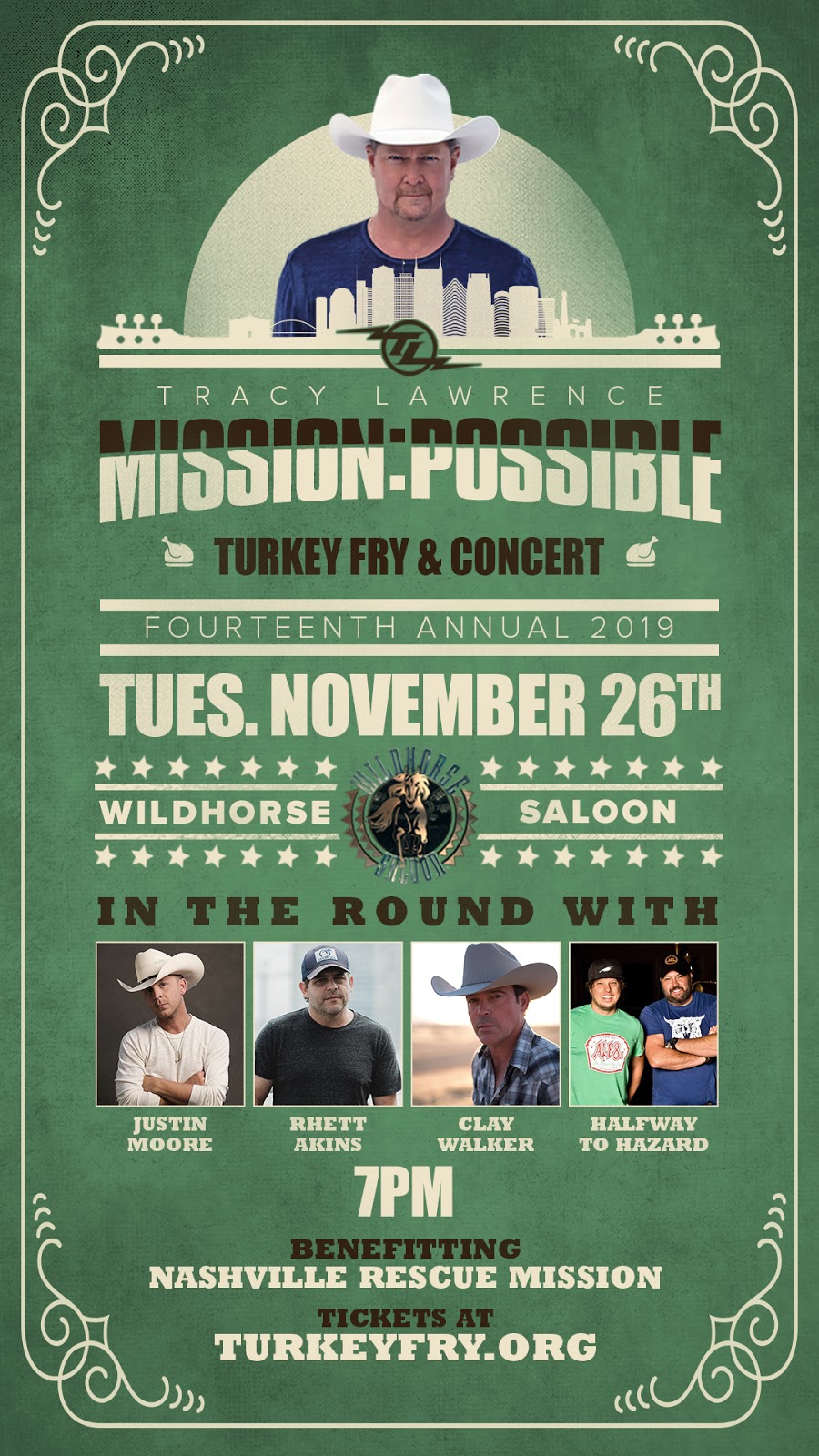 Tracy Lawrence has been an influential voice in country
music for over 25 years. His commitment to the authentic sound of
country music has kept Lawrence at the top of his game with traditional
and contemporary fans alike. In addition to his impressive music career,
Lawrence is also nationally recognized for his philanthropic work with
his annual “Mission:Possible Turkey Fry & Concert.”

Launched in 2006, Tuesday, November 26th, 2019 will mark the 14th
anniversary of this fundraising event, which to-date has raised over
half a million dollars for the homeless and hungry in Dallas, Louisville
and Nashville, and served more than 84,000 meals. Proceeds from this
event benefit the Nashville Rescue Mission as they continue their work within the homeless communities of Nashville, TN.

This year, Lawrence is thrilled to welcome the stellar musical talents of Justin Moore, Rhett Akins, Clay Walker, and Halfway to Hazard.

“The annual Mission:Possible Turkey Fry is my favorite time of the year,” says Lawrence. He continues,  “Being able to bring awareness and raise money to  Nashville Rescue Mission
is such an honor.  As the homeless population grows in our country it’s
important that we continue to work toward understanding all of the
different situations that lead people down the path of homelessness. Rescue Mission is such an important part of our Nashville community and I look forward to working with them for many more years.

Our goal as we move forward is to expand to other cities that are struggling with the same issues. I hope Mission:Possible can grow beyond Nashville.  We’re proud to have Center Ministries in Louisville, KY and Dallas Life in Texas as part of our Mission:Possible family.”

Tickets for the “Mission:Possible Turkey Fry & Concert” are on-sale Friday, September 13th at 10:00am CT.

This summer, Lawrence released his first original studio album in six years, Made In America, which is available now on all download and streaming platforms. He can currently be seen on the road with his “Made In America” tour with stops throughout the U.S.

Recently it was announced that Lawrence will be joining fellow Arkansas native and “Mission Possible” performer, Justin Moore, as a co-headliner on his “Late Nights And Longnecks Tour” kicking off in January 2020.

To create, promote and implement the Mission:Possible Turkey Fry to feed
homeless men, women and children and raise awareness to the plight of
the homeless.

ABOUT THE NASHVILLE RESCUE MISSION:

Nashville Rescue Mission is a Christ-centered community committed to
helping the hungry, homeless, and hurting by providing programs and
services that focus on a person’s entire life—physical, mental,
spiritual, emotional, and social.

One of country music’s truest traditionalists, Tracy Lawrence has sold
more than THIRTEEN MILLION albums and has charted EIGHTEEN No. 1 songs.
He has garnered numerous CMA and ACM awards and nominations, as well as a
Grammy nomination. Recently, Lawrence released his brand new album, MADE IN AMERICA. The album is a milestone for Lawrence – penning 8 of the 12 tracks featured.

Lawrence’s last studio album, 2017’s critically acclaimed, GOOD OLE DAYS,
hit the #1 position on the iTunes Country Chart. In addition to his
chart-topping success, Lawrence hosts the Award-Nominated nationally
syndicated radio show “Honky Tonkin’ With Tracy Lawrence,” for which he
has received two ACM nominations for National On-Air Personality of the Year. The show features music from the 80’s, 90’s and 2000’s and is heard on more 90 affiliates. Tracy is also the co-creator of STORMING HEAVEN: THE MUSICAL,
a production based on the novel Storming Heaven. Tracy, along with
others, helped to develop the storyline of the musical and also composed
songs for the drama. He was honored by the Nashville chapter of AFP
(Association of Fundraising Professionals) with “Philanthropist of The
Year” for his nationally recognized annual MISSION:POSSIBLE Turkey
Fry and Concert, which has raised over Half a Million Dollars for the
homeless and hungry in Dallas, Louisville and Nashville, and served more
than 84,000 meals. MISSION:POSSIBLE is poised to make an even larger
impact in the future, as the 501 ( C ) (3) organization expands into
more markets across the country in 2019.