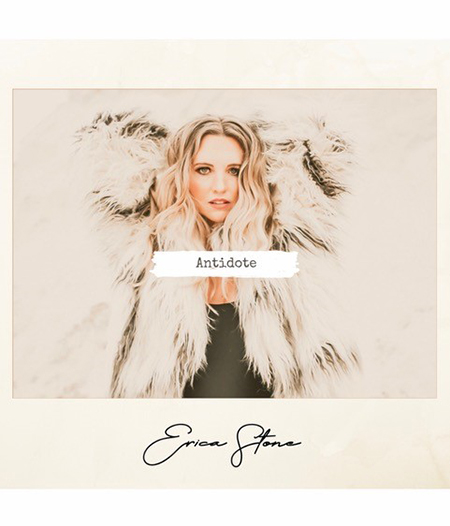 Erica Stone’s transparency of her journey through life has been released on her current music project, Antidote. Think Country
hosted an exclusive release for the highly anticipated album which was
released on all digital platforms on April 29 and featured on the New Music Nashville playlist. Download and streaming links available here.

The twists and turns of life nearly swallowed her, but she rises to the
surface with incredible new music, new lyrics to tug at your heart and
melodies that offer you courage to stand or a safe place to find solace.

“Wow what a journey it’s been getting to this point. So much life has
been lived between where I used to be in this industry and where I am
today. I feel like this record explores the tension between life, love,
failures, and the ultimate comeback… all journeys we each have
traveled at one point or another,” expressed Erica Stone. “My hope is
that the listener will find solace in knowing no matter where they sit
in life, I’ve been there too… and none of us walk through it alone.”

7. It Is What It Is – Erica Stone/Brian White

“Sometimes life doesn’t always move smoothly. There are bumps in the
road, and for each one of us, the movements are different, but the
results are the same. That’s what Erica Stone is saying on her newly
released Album, “Antidote,” writes Think Country journalist, Robin
Beers. “Erica is ready to tell the story about the journey and the road
she is taking now. I am waiting anxiously to continue the story with
her. It is all very relatable, no matter what road your own life takes
you down.”

Antidote, features two current singles by Stone, “Lies” and
“Glass House.” The upcoming video for “Glass House” will spotlight real
stories from individuals who messaged her, willing to share their
setbacks and insecurities in front of a camera. The collaborators on
this project are those in her tight circle that worked with her nine
years ago and stuck with her, when others strayed.

Erica Stone, the epitome of a  small-town girl in
Southwestern Missouri who grows up to be a wife and a stay at home mom,
with dreams of someday making music. That someday would involve years of
twists and turns which nearly swallowed Erica Stone whole. Music City
also came calling around the same time for Erica and her husband. Early
2004, music showcases and meetings with industry executives seemed
promising for Erica and her then musical duo partner, and just as the
duo was about to get signed to a major label, the doors closed. The
music dreams dimmed and took a side-seat; but not due to the politics
and roller coasters of Music Row. Erica and her husband opened an
orphanage and an adoption agency to rescue the hundreds of children
being beaten, traded, trafficked, separated, and displaced from their
families. In the midst of the firestorm, they lost their precious
daughter, Adama, due to negligence and corruption within the Sierra
Leone borders. And without music and writing as her therapy, Erica felt
like she was losing the core of who she was. But sometimes, it takes
losing yourself to find yourself. Nearly a decade after she gave up her
undeveloped dream for a destined reality, Erica is now sharing her story
with the world, as an artist, author, and advocate. “I’m in a different
position than I was the first time,” Erica says. “I don’t think I knew
who I was. But today, I feel confident in my story and the mess of what I
am and who I am. There’s no façade–no putting on the best show in
somebody’s office,” referring to a time when producers advised her not
to talk about Africa in front of execs, for fear of losing her career.
And when it comes to the future, Erica is learning to trust the process
and surrender the outcome.