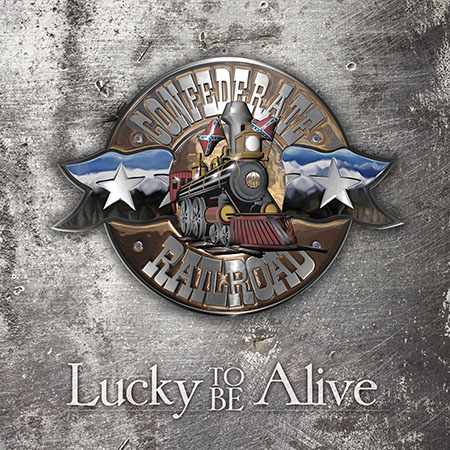 
NASHVILLE, Tenn. (July 15, 2016) – Multi-platinum recording artist Confederate Railroad is back with their latest album, Lucky to be Alive, which is now available on iTunes, Amazon
and music retailers nationwide. The project marks the first release by
the chart-topping band in nine years, and showcases their unique style,
bringing their southern–rock-meets-country-conscience front and center. A
key highlight on the album includes a special 20th Anniversary edition
of the signature hit, “Trashy Women.” The new, revamped version features
vocal appearances by Willie Nelson, John Anderson, Colt Ford and Jerry Glanville, who all teamed up to benefit a special charity near-and-dear to Confederate Railroad’s hearts, The Hunter Worley Foundation.

Founded by lead singer Danny Shirley, The Hunter Worley Foundation
will receive 100% of Shirley and Confederate Railroad’s proceeds from
“Trashy Women.” The charity was established in response to a tragedy
suffered by a family in Shirley’s hometown, where a child named Hunter
Worley was accidentally killed in a farming accident. The foundation
provides financial and therapeutic support to families who have lost a
child.

The ACM award winners are hitting the road for the remainder of 2016
in support of their latest Danny Shirley / Blue Miller co-produced
album, along with making several media appearances in-between. Shirley
recently served as the co-host of four episodes of Heartland TV’s smash,
“Country Classics,” which showcases classic country from the 70s, 80s
and 90s, highlighting some of the genre’s biggest hits. There are
multiple reasons why lead singer Danny Shirley is ‘lucky to be alive,’
which are highlighted in recent features on AXS.com and the The Boot. You can learn more about Confederate Railroad at confederaterailroad.net.

Lucky To Be Alive Track Listing:
1. Lucky To Be Alive
2. Played The Game
3. The Man I Am Today
4. If I Ever Cross That Line
5. Trashy Women (20th Anniversary) featuring Willie Nelson, John Anderson, Colt Ford and Jerry Glanville
6. Goodbye Song
7. Somebody Like You
8. Whisky And Women
9. Fast Cars And Guitars
10. Don’t Feel As Young As I Used To
11. Psycho Bitch From Hell (Live)
12. I’m Not Fallin’ For That