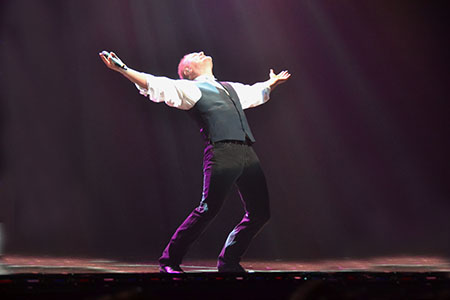 NASHVILLE, Tenn. (August 9, 2016) –
25 years after Collin Raye shot to fame with the timeless No. 1 hit
“Love, Me,” the country sensation is still considered one of the hardest
working acts in the business, with a heavy multi-state touring
schedule, including a Mexican Riviera Cruise, remaining in latter part
of 2016. Raye is bringing his exciting and uplifting live show across
the U.S. to celebrate a quarter-century of success in the industry.

On The Big 25 Tour, the energizing showman performs vivid
rockers like “My Kind Of Girl,” “I Can Still Feel You,” “That’s My
Story” and “Little Red Rodeo.” Fans can also look forward to hearing his
smooth tenor on iconic ballads like “In This Life,” “One Boy, One Girl”
and many more.

Raye has built a career on songs with an emotional connection to
listeners that other acts of the era can only dream of. In 1994, the
music video for the poignant hit “Little Rock” led to more than 100,000
calls to Alcoholics Anonymous from people seeking help for their
addictions. The song and video for “I Think About You” exposed the
exploitation of women and children, earning Raye the award for “Video of
the Year” from the Academy of Country Music in 1997.

In addition to impacting lives with his issue-oriented music, Raye
has utilized his stardom to advance social causes through his tireless
charity work. He has supported organizations like Special Olympics,
Parade of Pennies, Monroe Carell Jr. Children’s Hospital at Vanderbilt
and The Tennessee Task Force Against Domestic Violence, as well as
founding the Haley Bell Blessed Chair Foundation to honor the memory of
his granddaughter.

Fans are anxiously awaiting Raye’s soon-to-be released “Silver
Anniversary Album” to commemorate his 25 years in country music,
featuring new recordings of his greatest hits. Most recent projects for
the ten-time Male Vocalist of the Year nominee include a tribute to
Glenn Campbell, Still On The Line, an inspirational album, His Love Remains, and his first autobiography A Voice Undefeated. To purchase, please visit www.collinraye.com.

About Collin Raye
Collin Raye’s searing ballads and electric performances have been
captivating country audiences for more than 25 years. With 16 No. 1
hits, 24 top 10s and ten Male Vocalist Of The Year nominations, Raye has
clearly emerged as one of the great voices of our time. The De Queen,
Arkansas native rose to fame in 1991 with the timeless number one hit,
“Love, Me.” In 1994, his music video for “Little Rock,” led to over
100,000 phone calls to Alcoholics Anonymous from addicts seeking help.
“Not That Different,” was a song that pleaded for tolerance, and “I
Think About You” (awarded as “Video Of The Year” by the Academy of
Country Music in 1997) exposed exploitation of women and children. His
latest album projects include His Love Remains, his first inspirational hymns album, as well as Still On The Line, a tribute album to Glen Campbell. In 2014, he released his moving autobiography, A Voice Undefeated.
He has topped the charts with songs such as “In This Life,” “I Can
Still Feel You,” and “That’s My Story.” He is currently performing
across the U.S. on The Big 25 Tour. For more information on Collin Raye
and upcoming tour dates, visit collinraye.com.