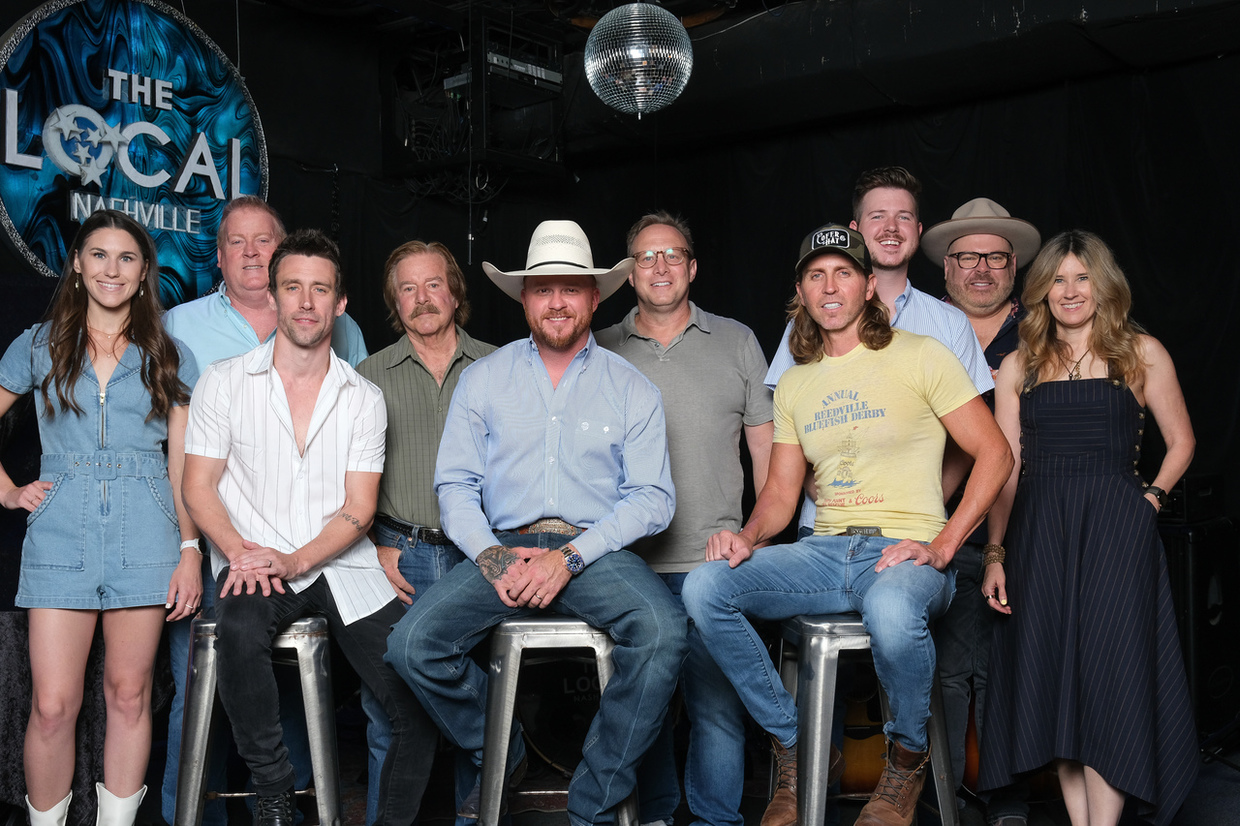 Cody Johnson’s “Til You Can’t” celebrated at No. 1 party

Cody Johnson’s “Til You Can’t” celebrated at No. 1 party

Number One parties are always important milestones in the career of an artist or songwriter. When the party also celebrates a couple of ’firsts’ then the celebration is that much sweeter.

On Wednesday, June 22, platinum-selling hitmaker Cody Johnson celebrated the chart-topping success of “Til You Can’t” with the song’s writers, Ben Stennis and Matt Rogers, jointly hosted by ASCAP and BMI. The celebration was held at The Local, fast becoming the go-to venue for Number One parties, showcases, and just good live music.

“Til You Can’t” is Johnson’s first No. 1 on the Billboard Hot Country Songs and Country Airplay charts. For Johnson, the achievement is all the more remarkable in that he has racked up numerous RIAA-certified Gold and Platinum recordings without actually hitting No. 1 until “Til You Can.”

The song also marked the first No. 1 for songwriter Ben Stennis, although he is no newcomer. The BMI Award winning songwriter has credits that include Tim McGraw’s “Neon Church” and cuts on Ronnie Dunn (“Damn Drunk”), Parmalee (“Roots”) and more.

Describing Stennis during the event, Josh Tomlinson, BMI’s Director, Creative, noted that he had watched Stennis grow as he “kept his head down and put in the work” that led to this moment. “It’s been a privilege to watch,” he added.

Mike Sistad, ASCAP Vice President Nashville Membership took the stage to talk about Matt Rogers. “He’s had songs recorded by Luke Bryan, Dustin Lynch, Brett Eldredge, Randy Houser, Chris Young, Lainey Wilson and many more,” said Sistad.  “He’s had four Number Ones on Canadian Country Radio, a nomination for Single of the Year and just recently celebrated his Number One with ‘Freedom Was a Highway’ for Jimmie Allen and Brad Paisley.”

Aubrey Rupe of Young Guns Publishing had worked the song relentlessly from the time it was written until it was recorded by Johnson. When it was her turn to speak, she addressed Rogers and Stennis, remarking that this song could have gone to an artist “that has had ten or twelve Number Ones,” but “it was so satisfying to do what we’re doing right now, to truly change the lives of artists like Cody and take them to the next level, so thank you both.”  She added, “Country music needs Cody Johnson.”

Both the songwriters also expressed their gratitude. “I’m thankful to be in this community,” said Stennis, “To be able to do what I do for a living, and for God blessing me with the ability to get up and write every day with my buddies.”

Rogers noted that the bridge of the song refers to calling your mother. He said that his mother, who suffered a stroke in 2018, had always been the biggest fan of his music. “When I hear the bridge now, it takes on a different meaning for me,” he said, adding, “It’s her birthday today, so this one is for Betsy Rogers.”

Warner Music Nashville’s co-presidents Cris Lacy and Ben Kline presented Johnson with a plaque recognizing the RIAA-certified Gold and Platinum status of “Til You Can’t” and another for the documentary, Dear Rodeo: The Cody Johnson Story.

During his remarks, Johnson said that there had been a snowball effect from everyone in the room to reach this point. “I’ve got guys in my band that have been there for ten, eleven, twelve years, guys in my crew that have been there that long,” he said.  “My guys on the stage, my crew, we are a family. We’re on every night and we try to preach our brand of country music.  We know that we’re different. We know it’s different and it’s not what radio’s been playing but we never stopped.  We kept on playing, kept on trying to preach real country music.”

Johnson also expressed his sincere thanks to his long-time manager Howie Edelman who had introduced him to producer Trent Willmon.

Johnson went on to say, “It’s not very often that you get to cut a song that is written that impeccably and changes your own perspective on your own life and your own career. I got ‘Til You Can’t’ in my hands at a place when I was really struggling with grinding so long, with putting in so much work and so much time and so much struggle and so many doors closing and [hearing] so many No’s… ‘No, no, no.’ When I had a chance, I had to take it.  I heard that song and it spoke to me so much that I said, ‘No matter what it is, it’s gonna be huge.’ It changed my life and I want to thank both of you guys, Matt and Ben.”

Explaining the impact that “Til You Can’t” has made, Johnson said, “There are thousands and thousands of people out there that [the song] has changed and I realize that I got to be the microphone for that. It changed me. It changed who I am to my core, the way I view my stress, the way I view my anxiety or whatever’s going on, any kind of difficulties in my career.”

Johnson described what he believed country music should do: “It should change your life. It should make you want to be better.” Turning to Stennis and Rogers, added, “We have these two men right here to thank for it, so thank you very much.”

On a personal note, for several years I had been hearing about Cody from my friend Judy Mayes

who had relocated to Texas. Judy knew that I had followed Texas artists since 1992 when I began covering the ‘Nashville’ happenings for Texas Country Music magazine.

She told me that she wanted me to check out a Texas artist named Cody Johnson. When I did get to know him and his music, I was an instant fan of both his music and character. The first thing that impressed me was that he was a family man, and at the Number One party he gave a sincere ‘thank you’ to his wife Brandi for her many years of support.

stage at 19 and cut and released his first album on his own called Black and White Label. Cody was making his rounds on the Texas music circuit and was on track to being a household name in Texas. By this time, Cody had put together an amazing band and was releasing professionally recorded albums. His producer Trent Willmon – whom I met in the 1990s when he was a rising star – had moved on up to being a hit-making producer. I am pretty sure it was one of the reasons Cody won the 2011 Best New Male artist at the Texas Regional Music Awards. He was already causing a stir all over Texas and was in high demand over the next several years as a top artist on the Texas music scene.

Fast forward to 2022 he is now in the circle of record breakers like George Strait and Garth Brooks for selling out the Houston Livestock Show and Rodeo. A former bull rider, Cody played to a whopping 70,554 super fans!

“’Til You Can’t” remained on top of the Radio Airplay charts for two consecutive weeks in the U.S. and five consecutive weeks in Canada. The platinum-certified hit spent nine weeks atop the Billboard Hot Country Songs Chart and reached Top 20 on their all-genre Hot 100 chart. It has logged more than 315 million global streams to date.