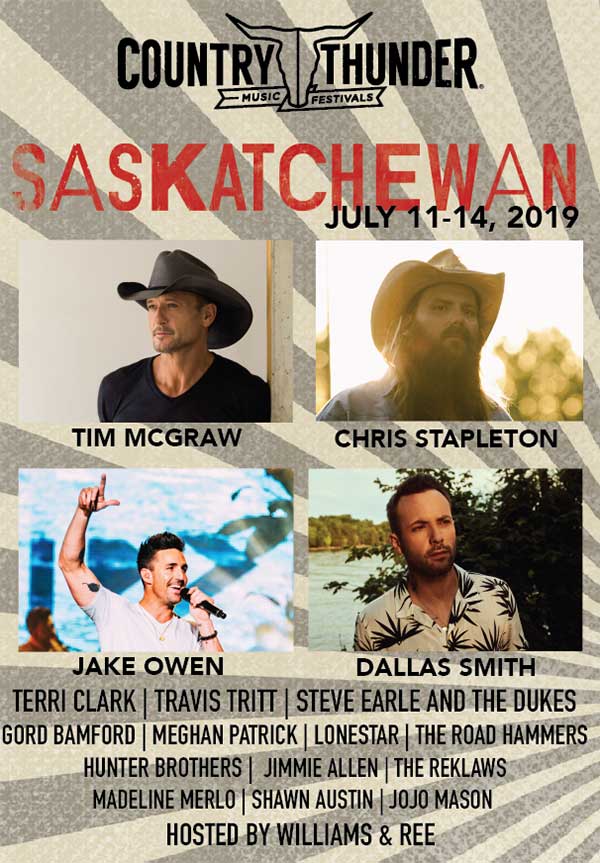 “Saskatchewan is home and this is the one we get most excited about,” says Country Thunder Music Festivals CEO, Troy Vollhoffer. “Chris
Stapleton is the biggest artist in country music and fans here have
been excited since we announced him at last year’s festival. The timing
was right with both McGraw and Owen enjoying banner years, while Dallas
Smith has grown into a superstar, first appearing in the Craven Valley
in 2012. We couldn’t be more proud and excited of the line-up which has
been put together for some of the greatest country music fans in the
world.”

In addition to the big-four announced, Clark will also perform along with roots, country and Americana legend Steve Earle and the Dukes, the original line-up of Lonestar, 90s country star Travis Tritt, Gord Bamford, Shawn Austin, The Reklaws, Meghan Patrick, Madeline Merlo, The Road Hammers, JoJo Mason, Jimmie Allen and the return of Saskatchewan’s own Hunter Brothers complete
what many are already calling the greatest lineup ever assembled in the
Craven Valley. Given the area’s rich history, a bold statement, to be
sure.

Stapleton is a five-time Grammy Award, and astonishing
17-time ACM and CMA winner. The Lexington, Kentucky native is truly a
once-in-a-lifetime artist who transcends musical boundaries and genres.
The much-anticipated Sunday closer has never played the Saskatchewan
market before.

There have been very few country artists more consistent than McGraw over the past 25 years, and CT Nation is in for a treat when one of the genre’s most consummate performers takes the stage.

Recent hit singles, Neon Church and Thought About You are currently
showcasing the country music legend at the peak of his considerable
powers.

Jake Owen makes his long-awaited return to these parts
on a hot streak which has included a whopping five hit singles from his
No. 1 album, American Love. Think of how good I Was Jack (You Were
Diane) and American Country Love Song are going to sound under the stars
in the Craven Valley!

Smith continues to defy logic with each new release and
he returns to Country Thunder Saskatchewan as not only a first-time
headliner, but now as Canada’s most-played country radio artist ever.
Think about that for a moment, if you will…

Country Thunder Saskatchewan 2019 is rolling in – see you all there!

Four-day passes are available for three easy and incredibly low payments
of $60 – there is no better value in country music. Four-day passes,
single-day tickets, reserved seating, camping, Platinum Experience and
all the extras are also available. Visit countrythunder.com to purchase, or order by phone at 1-866-388-0007. Facebook, Twitter and Instagram all @countrythunder.

The Country Thunder Music Festivals organization has a 15-year history
which boasts four other major multi-day events in North America,
including the reigning ACM Festival Of The Year in Arizona. The
organization also hosts events in Wisconsin, Alberta and Florida.