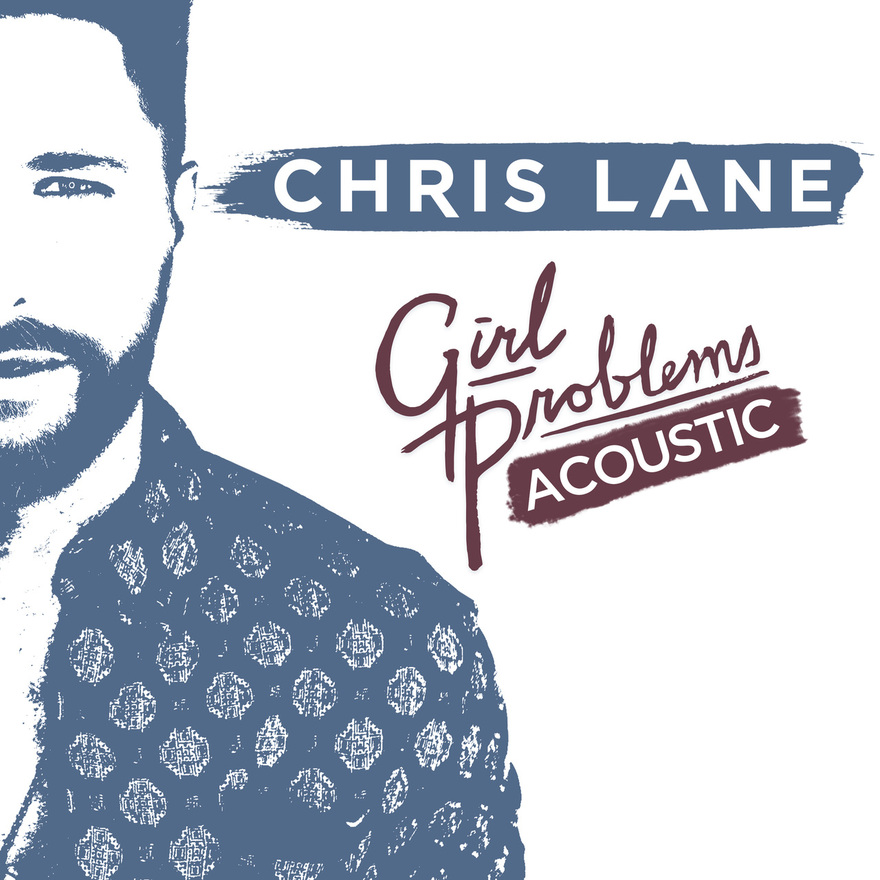 Nashville, Tenn. (August 24, 2017) – Breakout Country star Chris Lane
is keeping the heat on as summer winds down, surprising fans of his
smooth R&B-meets-Country vibe with a stripped-down, all-acoustic
version of his GIRL PROBLEMS album debut.

An exclusive first listen of the brand new GIRL PROBLEMS acoustic project – featuring the GOLD-certified smashes “Fix” and “For Her” – is available today (8/24) on Billboard.com, and the album will begin streaming worldwide on digital services tomorrow (8/25).

It’s just another first in more than a year of undeniable success for the young Kernersville, NC, native.

“So many amazing things have happened since the relase of GIRL PROBLEMS
last August, ” says Lane. “And a great way to celebrate that is with
this all-acoustic version, and I can’t wait for people to hear it, as
well as what’s to come.”

Originally released in August of 2016, GIRL PROBLEMS catapulted Lane into the Top 10 of Billboard’s
Top Country Albums chart with the strength of the infectious “Fix,” his
first career #1 at Country radio. Featuring soaring falsetto vocals and
swagger for days, he followed up with the hearts-on-fire devotion of
“For Her,” another hit which is currently poised to enter radio’s Top 10
and has already reached #1 on the iTunes Top Country Songs chart
following a special performance on season 21 of ABC’s The Bachelor.

Both
singles achieved GOLD status for combined sales and streaming figures
of over 500,000 units, and helped propel the rising talent to
nominations at the 2017 ACM Awards (New Male Vocalist of the Year) and the 2017 iHeartRadio Music Awards (Best New Country Artist), as well as additional national TV appearances on Late Night With Seth Meyers and CONAN.

Lane’s
success has also translated to the road, where the singer has opened
for Garth Brooks and spent time earlier this summer as a supporting
artist on Tim McGraw and Faith Hill’s long awaited SOUL2SOUL TOUR
reboot. Since then, he’s been a huge part of Florida Georgia Line’s
massive THE SMOOTH TOUR 2017, firing up huge crowds alongside Hip-Hop
icon Nelly on each date, and even Pop idols Backstreet Boys for FGL’s
sold-out stadium concerts in Boston, Minneapolis, and Chicago.

He’ll
continue on THE SMOOTH TOUR 2017 until it wraps with a two-night stand
at the Verizon Amphitheatre in Alpharetta, GA, October 20-21, with more
shows on tap through the end of the year.

Chris
Lane continues to turn heads with “For Her,” catapulting his devoted
second single to #1 on the iTunes Top Country Songs chart following a
special performance on season 21 of ABC’s The Bachelor. The
follow-up to his #1, GOLD-certified smash debut “Fix” – claiming over
36.7 million streams on Spotify and 8.5 million views on Vevo – both
songs are featured on his Big Loud Records debut album, GIRL PROBLEMS,
produced by superstar studio ace Joey Moi (Florida Georgia Line).
Gaining recognition for his jaw-dropping falsetto vocals mixed with a
smooth R&B-meets-Country vibe, Lane was named one of MusicRow Magazine’s 2017 Next Big Thing Artists and scored his first-ever nominations for the 2017 iHeartRadio Music Awards (Best New Country Artist) and the ACM Awards (New Male Vocalist of the Year). Lane’s profile is on the rise thanks to his national TV appearances on Late Night With Seth Meyers and CONAN plus shout-outs from massive industry names like Bryan Cranston (Breaking Bad),
Selena Gomez, Florida Georgia Line, Lucy Hale, Daughtry and more. The
Kernersville, NC, native has landed coveted opening slots on tours with
Garth Brooks, Dustin Lynch, Rascal Flatts, and Tim McGraw and Faith
Hill’s long-awaited SOUL2SOUL TOUR. He is currently out on Florida
Georgia Line’s nationwide THE SMOOTH TOUR 2017.

To learn more about Chris Lane go to iamChrisLane.com