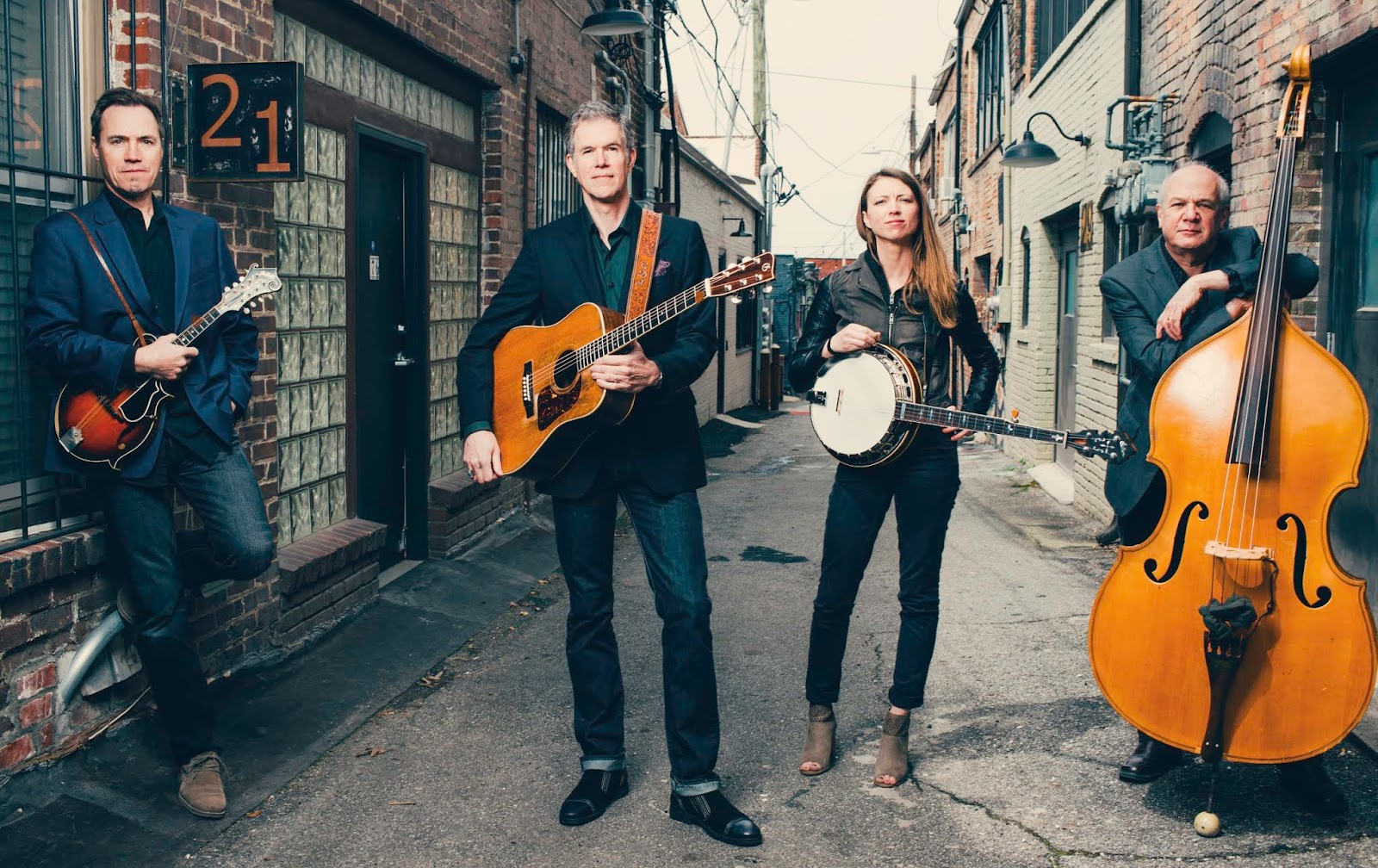 Lamitschka:  Music has many new fans throughout Europe
who may be hearing about you for the first time. How would you describe
yourself and the music you play to someone who has never seen or heard you?

Answer:  It’s acoustic music very much in the bluegrass tradition but with an
emphasis on original music and distinctive arrangements.

Answer:  It was an exciting year for us, which included the release of our second
album for Mountain Home records, and tours of the U.S., Canada, and Europe.

Answer:  The latest CD is called “Made to Move” and it was our first to feature
our newest band member, banjo player Gina Clowes. It has done very well for us,
producing four songs that were in the top 5 of Bluegrass Today’s weekly chart,
including two number one songs, the title track, “I’m a Wanderer” and “All the
Ways I’m Gone.”

Answer:  The title is taken from the song “I’m a Wanderer,” which has become one
of our most popular songs. In the chorus it says, “I was made to move to the
beat of my own drum,” so we called it “Made to Move.”

Answer:  We wrote most of them, with every member of the band contributing
material.Half of the songs were written or co-written by me.When we don’t write them, I look to
find newer arrangements of older songs. On this one we revived a 1970s country
song, “You Always Come Back to Hurting Me,” one that he co-wrote with Tom T.
Hall. Tom T. is a close friend of mine, so I have usually included one song
he’s written on CDs of mine. In some cases, we’ve written songs together with
his wife, the late Miss Dixie Hall.

Answer:  Jon Weisberger and I have been co-writing
more songs, and on this one, we co-wrote four of the songs. We tend to write
together by correspondence, since we don’t live at all near to each other. I
will often come up with melodic and lyric idea, record it, send it to Jon, and
he’ll start making additions or changes.This CD also includes a revival of a bluegrass standard but with a
twist: It’s “Dark Hollow,” but I decided to combine Clarence Ashley’s “Dark
Hollow Blues” with the “Dark Hollow” people are more familiar with to make a
medley. It’s become a popular song for us.

Answer:  “Made to Move” is the first to feature our new banjo player Gina Clowes,
so it has a different sound and rhythmic feel for that reason. We’ve been
extremely happy playing with her, so we were excited to go into the studio and
record in this combination.

Answer:  It’s an upbeat song, in both the tempo and the theme, so I think it
makes people feel good. Jon Weisberger and I co-wrote it.

Answer:  A song called “Who You Want Me to Be,” which I co-wrote with Gina
Clowes.

Answer:  It’s hard to pick one, but one of my recent favourites is one I didn’t
write: “I’m a Wanderer.” It was written by our bass player Jon Weisberger,
along with Thomm Jutz and Charley Stefl. They played the demo of the song for
me, and I loved it immediately. It just fit my voice very well, and I related
very well to the subject, which is about being a traveller,  something I’ve been all my life. It also
feels very natural to the band, so it came together very well in the studio.

Answer:  I would say total creative control. That’s one of the things I
appreciate about our record company, Mountain Home. They don’t try to make us
fit into a certain mould or make us sound like someone else. We’ve never had
them say, “we don’t like what you’re doing, please change it.” We do what feels
musically right to us as a band.

Answer:  I think it just requires finding or writing songs that are meaningful to
people in some way and that have memorable melodies. Then it’s necessary to
make sure that it comes through in the recording and production process.

Lamitschka:  Do you have any interesting stories about
how fans have been affected by your music?

Answer: A lot of people tell us that they have been
touched by the song “Final Farewell” because it’s about caring for those around
us as if we might not see them again. Some people who have recently had a loved one dieare often
moved by this song.Someone in
Ireland told me that he was listening to the song I wrote called “Raindrops
Fell” while he was with someone and it helped them to fall in love!

Answer:  The music of the Stanley Brothers was particularly inspirational. That’s
music I’ve been listening to since I started getting serious about music, when
I was around 15 years old. I was also very inspired by Doc Watson. Also because
of my lower voice, I was influenced by country singers like Charley Pride,
Merle Haggard, and George Jones.

Answer:  It’s challenging because so much music is available for free, and the
way people are consuming music is changing very quickly, sometimes faster than
we can keep up with. At the same time, a lot of doors have been opened for
people because there are new ways to reach audiences that used to be controlled
by a handful of companies deciding what people like.

Answer:  As the song “I’m a Wanderer” says, I love to travel, and to meet and
play music for new people. I especially appreciate international touring. I
also love rehearsing and arranging songs, watching something new take shape.

Lamitschka:  What was your big break that got you into
the music business?

Answer: My first full time job as a musician came as a result of a band
answering an ad in a magazine. It was Special Consensus in Chicago (they’re
still very active and successful). I auditioned for them while changing trains
in Chicago, and they hired me.

Answer:  I just became consumed with the music when I was a teenager. After I
played my first professional shows, I decided I wanted to try it
professionally. I thought it would either work out, or I’d get it out of my
system and try something else. I’ve been doing it ever since.

Answer:  I just started experimenting with it when I was around 20 years old, and
I discovered that I had the ability to create new musical ideas, and to put
emotions and experiences into poetry. It never occurred to me that I could, and
now I can’t imagine not doing it.

Answer:  I’m driven by the desire to create new sounds. I also love the feeling
of playing music with other people, and the magic that can happen there, so
that also drives me. Singing is also a great personal and emotional release for
me, so I love to do it. I’m driven by that, too.

Lamitschka:  What’s unique about you that will
differentiate you from other artists?

Answer:  For one thing, I’m a low-pitched singer playing music that’s known for
tenor voices. I always try to make my singing and music serve the song, and not
try to force it to be something else. I don’t like to hit people over the head
with the music. I strive to make music that sticks with people, so they go back
and listen to songs repeatedly, discovering new things about them.

Answer:  I got to play guitar on the tune “Sally Goodin’” with Earl Scruggs and
the Irish group the Chieftains (I was on tour with them at the time) on the
U.S. TV show The Conan O’Brien Show. For any bluegrass musician, playing with
Earl Scruggs is a dream, and I’ve always loved Irish music, too, so to play
with him and the Chieftains at the same time was really exciting for me. I also
played a couple of shows as Tom T. Hall’s band leader, and I got to play the
same dobro that had been used on his classic recordings. The fact that we’re
friends made this experience that much more meaningful to me.

Lamitschka:  When you get time off, how do you like to
relax?

Answer:  After 20 years in Nashville, I now live in northern Alberta in western
Canada, so when I have time off, especially in the winter, I do the ice sport
of curling (which you may have seen in the winter olympics).

Answer:  The best way is to check out tour schedule at chrisjonesgrass.com.

Answer:  Though I have played in the former Yugoslavia and Bulgaria, I would like
to play some areas of eastern Europe that I’ve never been to, like Poland and
Estonia. I’d also love to play in Australia and New Zealand.

Answer:  We love playing in Europe and meeting European fans. I also love riding
the trains there. We can’t wait for our next tour there, which right now is
planned for May of 2019.