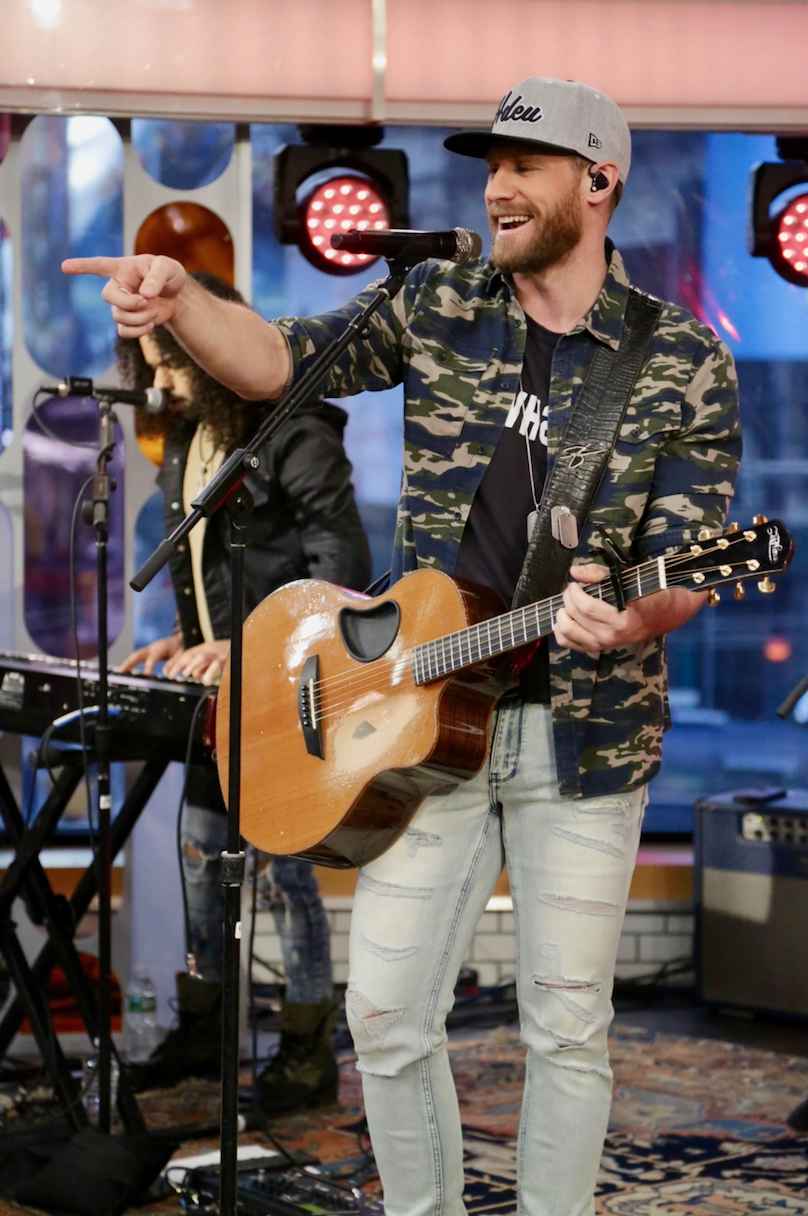 Platinum-selling entertainer Chase Rice performed on Good Morning America’s “Strahan & Sara” yesterday, February 26, with the television debut of massive hit “Eyes On You,” described by People as “addictive” and Billboard as “the
latest sign for Rice that things are working.” In addition to the viral
sensation which has now been streamed more than 120 million times, Rice
also sat in as the house band for the full show, providing music
throughout the hour. Watch his full performance of “Eyes On You” HERE.

“‘Eyes On You’ is about living in the moment, taking it all in, and
since releasing it we’ve relived these moments of fans singing it back
to us night-after-night. It’s wild and an incredible thing to witness
when a song transcends its original meaning and people adopt it as their
own,” shares the man ESPN characterizes as “a rarity.” “This is their song — your song, and my eyes are on you.”

While speaking with hosts Michael Strahan and Sara Haines before
his performance, Rice pointed out a group of Long Island volunteer
firefighters in the audience. Invited as his guests, the first
responders were on hand in celebration of Rice’s recently announced partnership with
Jack Daniel’s Tennessee Fire to raise funds and awareness for the
National Volunteer Fire Council, which supports and advocates for the
70% of firefighters who volunteer their time to keep us safe.

In addition to his Top 15-and-climbing single, “Eyes On You,” Rice also
performed Platinum-certified Top 5 hits “Ready Set Roll” and
“Gonna Wanna Tonight” as well as “Do It Like This” off his No. 1 debut
album Ignite the Night, plus current album cuts “Three Chords
& The Truth” and “On Tonight,” a re-imagined version of which will
appear alongside three other deluxe tracks on Lambs & Lions (Worldwide Deluxe), available worldwide as the title implies this Friday, March 1.

Country music maverick Chase Rice has become one of country music’s most
exciting figures since arriving in Nashville, building a loyal fan base
across the country through his energetic live shows and gaining the
attention of music critics and industry professionals alike with his
edgy, eclectic sound. The Tar Heel State native released his sophomore
album, Lambs & Lions, with new label Broken Bow Records in
November 2017. The lead single, “Three Chords & The Truth,” reached
the Top 20 at country radio with the follow-up, “Eyes On You,” now Top
15 and quickly climbing and streamed more than 120 million times. Rice’s
debut album Ignite the Night launched at No. 1 on Billboard’s
Top Country Albums and No. 3 on the all-genre chart, and produced a
pair of Top 5 hits, the Platinum-certified “Ready Set Roll” and
“Gonna Wanna Tonight.” After supporting Kenny Chesney’s The Big Revival Tour, Rice consistently sold out 2,500-3,000 seat venues on his headlining JD and Jesus Tour, Everybody We Know Does Tour and Lambs & Lions Tour. He recently served as direct support on the Luke Bryan Farm Tour 2018 and headlined a U.K. run in advance of his highly-anticipated Eyes On You Tour, currently underway.