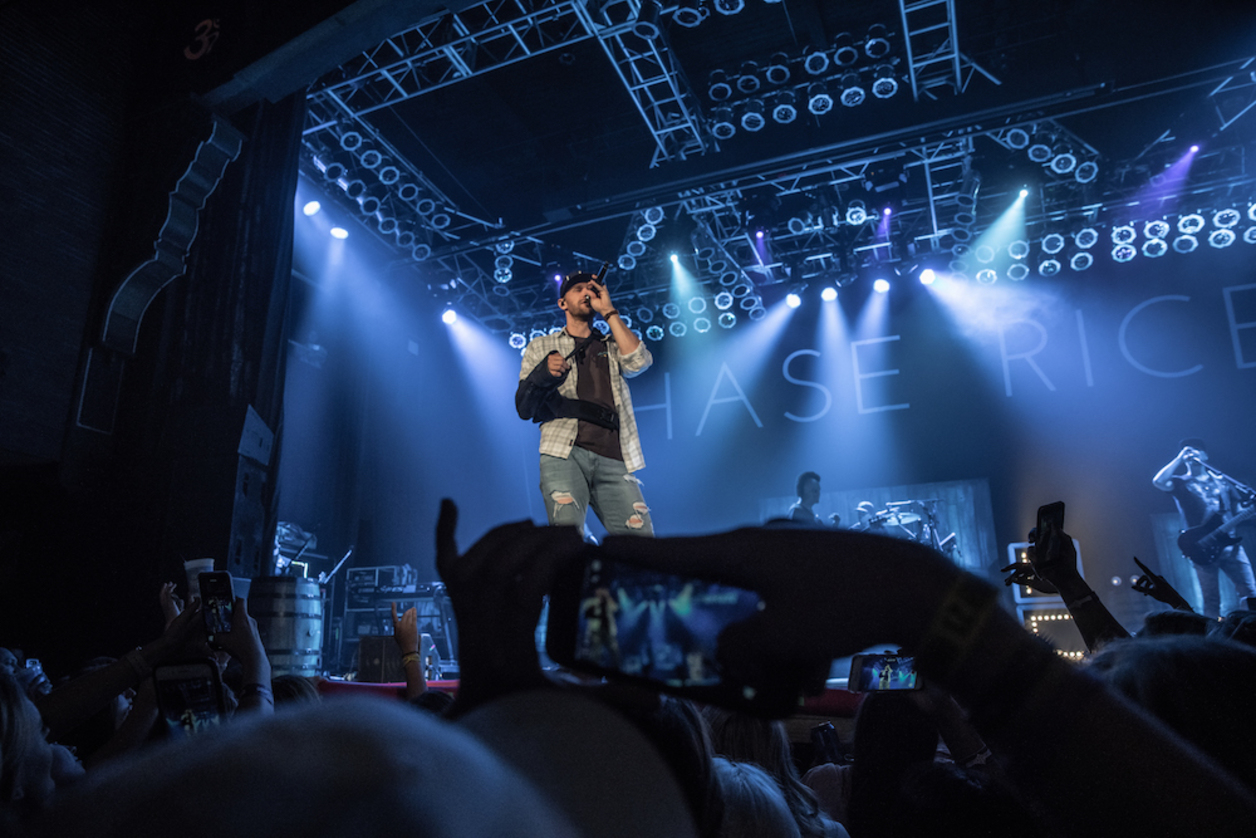 MYRTLE BEACH, S.C. – Chase Rice has
faced his fair share of injuries over the years. While playing football
at UNC, he took a hit directly to his left ankle, resulting in a win
for the team but surgery and a missed season for the athlete. In the
midst of rehabbing, he took another hit with the passing of his father.
That time off between his injury and his loss led a disheartened Rice to
channel his frustrations into music, leading to his discovery and love
of songwriting … and eventually the start of his career in music.

Rice tore his pectoral muscle while filming the music video for “Eyes On You,” a song from his latest, Lambs & Lions, that hit the U.S. Viral 50 Chart immediately after its release. Despite undergoing surgery just three daysprior, as he shared on
social media, Rice brought the energy that’s built him a faithful fan
following around the world to a passionate crowd at the sold out House
of Blues last night, giving his fans the night of their lives in Myrtle
Beach, S.C.

Stepping
on stage with his right arm in a sling and the mic in the other, the
Carolinian snarled, “There was no question in my mind about whether or
not we’d be here tonight. After hearing this crowd sing ‘Eyes On You’
back to us as loud as you have, I’m even more excited for everyone to
see this music video soon,” Rice marveled. “You andthis right here — this energy — this is why we do what we do and why nothing was going to stop me from getting on this stage tonight.”The show Friday
marked 10 years to the day that his father passed away, making his
performance all the more significant. Rice’s brother Casey joined him
for the night, bringing Chase a small Martin guitar, the only size
permitted for Rice to play while rehabilitating and the only one of its
kind within 100 miles of Friday’s show. Just above its neck Rice
inscribed “5-18-18” to commemorate the anniversary and special night.

Rice
is committed to rehabbing on the road and is adamant no shows will be
cancelled as he continues to play for fans across this country this
summer on the Lambs & Lion Tour and at various festival dates.

Country music maverick Chase Rice has become one of country music’s most
exciting figures since arriving in Nashville, building a loyal fan base
across the country through his energetic live shows and gaining the
attention of music critics and industry professionals alike with his
edgy, eclectic sound. The Tar Heel State native recently released his
sophomore album, Lambs & Lions, with new label Broken Bow Records. Rice’s debut album Ignite the Night debuted at No. 1 on Billboard’s
Top Country Albums and No. 3 on the all-genre chart, and produced a
pair of Top 5 hits, the Platinum-certified “Ready Set Roll” and “Gonna
Wanna Tonight.” After supporting Kenny Chesney’sThe Big Revival Tour 2015, Rice consistently sold out 2,500-3,000 seat venues on his JD and Jesus Tour and Everybody We Know Does Tour, and is currently on the road headlining his 2018 Lambs & Lions Tour. His first single from Lambs & Lions, “Three Chords & The Truth,” is currently in the Top 25 on the country charts and available at digital retailers now.