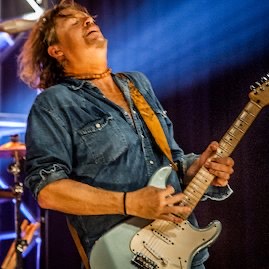 Charlie Robison Life Of The Party

Charlie Robison Life Of The Party

Texas singer/songwriter Charlie Robison was born on September 1, 1967, in Houston, Texas, and was raised in the town of Bandera. Robison would start writing his own music in his teens but after sustaining a devastating knee injury while playing football at Southwest Texas State University, he would pursue his music full-time. After playing in bands such as Chaparral, Two Hoots & A Holler, and The Millionaire Playboys, Robison released his solo debut in 1995 with Bandera. Life of the Party followed along with Unleashed Live, released in 2000, which was recorded with his younger brother, Bruce Robison, along with fellow contemporary Jack Ingram, and Step Right Up, in the spring of 2001. In addition to all of this, Robison was a judge on the first season of Nashville Star on the USA Network.

Despite his success as both a singer and a songwriter, Robison grew very discontent with the limitations that he faced as a Texas country artist under the confines of a major label in the Nashville country scene. He would sign with Dualtone Records. His 2004 release Good Times signaled a shift from mainstream country to a more not so polished country rock sound with a more independent approach towards his career. In 2009, Robison released the self-produced Beautiful Day on Dualtone.

Robison was a huge advocate and supporter for independent country music as well. In 2015, former Sony Nashville CEO Gary Overton was quoted in The Tennessean saying “If you’re not on country radio, you don’t exist”.

Robison wound up replying with the following…

“A few words for Gary Overton. I was signed by Warner Bros, and Sony during the days I had the patience to smile while ignorant pencil pushing, mullet-headed expense account rapists like you ran those labels. I’m on the road right now and just finished putting on a show for the folks in Shreveport. That’s a town u call a blip on ur screen. I don’t know Aaron Watson well but I do know you well though I’ve never met you. What I know about you is so sad. I spent so many years in Nashville watching you ignorant wastes of space sit behind your big desk and act like me, and all the Texas/Red dirt artists don’t exist. Well, Mr. “I have a job today but as soon as Florida/Georgia line goes out of style, and believe me dumb ass they will, you will not exist”. Saying that music does not exist unless it’s on the radio is like saying you don’t exist because you never got laid until you got your two-week job as the head of Walmart Records. I probably have a bigger house than you(for the time being because you’ll be back in the mailroom like all the other Nashville (heads). I’ll still be playing for crowds that have been loyal to me for 25 years) lemme cut you in on some people who don’t exist. Willie Nelson, Billy Joe Shaver, Robert Keen, Vincent Van Gogh, and Picasso didn’t exist for a long time. Guy Clark, Lyle Lovett, and the ever terrible songwriter Steve Earle. When the world of music fans go to bed tonight they’ll be singing these amazing artists in their head. You, my friend, will be wondering how you could ever reach your unreachable place in the annals of mediocrity. Have fun hovering above your tombstone and listening to people say “who the fuck is that?” as they make their way to Townes’s grave. I’m sorry I lost my train of thought, I think it was “who doesn’t exist?” Yep, that’s it, Gary Overton. Sweetheart”.

On September 24, 2018, Robison officially retired from stage and studio due to complications from surgery. Charlie Robison would release the following statement…

“Hey amigos, Charlie here. I’m sure you’ve all been wondering where I’ve been. Well, at the beginning of this year I underwent a surgical procedure that because of complications left me with the permanent inability to sing. Therefore, with a very heavy heart I am officially retiring from the stage and studio. Gonna keep it short but just wanted y’all to hear it from me. It’s been an amazing ride and I cannot tell you all what the last 25 years has meant to me. I was looking forward to another 25 but as they say “shit happens”. I thank you all for everything you’ve given me and I hope I was able to give you a fraction of the happiness you gave me. It was a hell of a ride but as they say all good things must end. Keep on supporting this thing we call Texas/Red dirt and hopefully we’ll all get to have a cocktail or two and talk about the good ol days. Until then, Buenos Noches. It’s been fun. Love each and every one of y’all”.

Charlie Robison’s influence is still felt by most in the current Texas country scene to this day. If you’re looking for brutally honest country music that is as “real life” as it gets, I would highly suggest checking out this wonderful catalog.