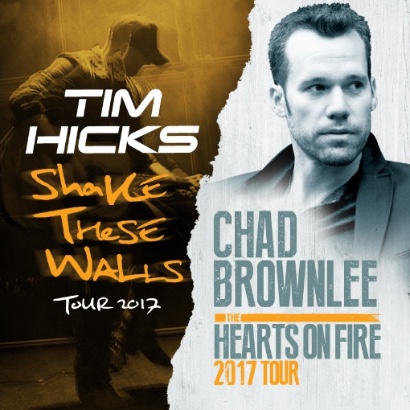 Toronto, ON (November 11, 2016) – Country stars Chad Brownlee and Tim Hicks
have announced today the addition of support acts to their much
anticipated 8 co-headlining dates across Western Canada in 2017. The
JUNO Award nominees and CCMA Award winners unveiled the addition of Jojo Mason, Tenille Arts and Dan Davidson as the support acts to perform on select dates during the mix of Brownlee’s “Hearts On Fire Tour” with Hicks’ “Shake These Walls Tour”.
As previously announced, the star duo will kick off the western run on
January 6 in Kelowna and will play dates in Vancouver, Fort McMurray,
Saskatoon, Calgary, Edmonton and Winnipeg before going their separate
ways.  See a list of confirmed shared dates below, and please visit each
respective artist website for additional independent dates.

Tickets
for all shows are on sale now. A limited number of VIP ticket packages
are available for each date and include a meet and greet and photo with
Hicks and Brownlee, access to a pre-show acoustic performance,
commemorative VIP laminate and more.

An
award-winning singer, songwriter, philanthropist and former NHL draft
pick (for the Vancouver Canucks), country music artist Chad Brownlee is
by definition a renaissance man.  With over a billion radio impressions
to date, his singles have rapidly climbed the country music charts, with
multiple singles cracking the national Top 10, including his last two
singles “Hearts On Fire” and “I Hate You For It”.  “I Hate You For It”
was also the top selling country digital song by a Canadian artist
(source: Nielsen Soundscan) for 10 weeks earlier this year.  Chad
recently released his latest single “Somethin’ We Shouldn’t Do” to Canadian radio on October 4, 2016.

A
proud native of British Columbia, throughout his career Brownlee has
received critical acclaim and numerous accolades including a highly
coveted 2013 JUNO nomination for Country Album of the Year, and most
recently multiple 2016 Canadian Country Music Association® (CCMA®) Award
™ nominations, including Album of the Year for Hearts On Fire, the fourth release in his discography.

The five-time GOLD certified Hicks released “Shake These Walls”, the follow-up to 2014’s CCMA Award nominated sophomore album 5:01/5:01+ on September 9th.
The album is a combination of slick party-fueled anthems, blue collar
country and free-spirited romance, shaping the evolution of an artist
the Toronto Star named “one to watch” and one who remains intent on
leading the pace within an evolving musical landscape. Co-written by
Hicks, “Shake These Walls” debuted as the #1 selling Canadian Country
Album on the Nielsen SoundScan Top Country Albums Chart, bringing the
acclaimed country artist front and centre for his proverbial close-up.

With
over one million streams at Spotify, Hicks celebrated his highest
charting hit single last month with “Stompin’ Ground” and this week he
boasts the #1 most added song at Canadian Country Radio with “Slow
Burn”.

For more information about Chad Brownlee and the Hearts On Fire Tour visit:  chadbrownlee.com