CD: Sammy Kershaw – DO YOU KNOW ME? (A Tribute to George Jones) 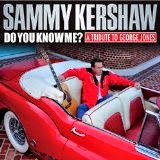 DO YOU KNOW ME? (A Tribute to George
Jones)
Sammy Kershaw [Big Hit Records]
Album review by Preshias for Country Music News International Magazine
Okay, so nobody can sing a George Jones
song like George Jones. But if anyone can come close, it’s Sammy
Kershaw.
July 2014 saw the release of DO YOU
KNOW ME (A Tribute to George Jones), Kershaw’s tenth studio album,
not counting ‘Greatest Hits’ compilations, two Christmas albums
and a couple of collaboration discs, one with Lorrie Morgan and one
with Joe Diffie and Aaron Tippin.
Kershaw’s voice has often been
compared to that of George Jones, and with justification. But he is
much more than a Jones impersonator, and with a notable musical
career that has spanned decades, he is long past being seen as a
Jones wannabe.
In fact when Kershaw was around
fourteen years old, he opened shows for Jones and they subsequently
developed a friendship that lasted for more than forty years. In
1994, Kershaw and Jones finally got to record a duet, “Never Bit a
Bullet Like That,” an event that Kershaw has described as one of
the greatest moments of his life.
The new album contains Kershaw’s
versions of twelve iconic George Jones songs and Kershaw has said
that his problem was deciding which songs to leave out rather than
which to include, so there are bound to be some fan favorites that
didn’t make the cut. But of course the set includes “He Stopped
Loving Her Today” and Sammy’s spoken recitation raises the same
goose bumps as George’s original. Among the other stand-out
tracks: “The Race is On,” the boozy, hiccupping “White
Lightning” and “She Thinks I Still Care.”
George’s daughter Georgette Jones
joins Kershaw on the song, “Near You,” the 1977 number one hit
that Jones had recorded with his then-wife (and Georgette’s mother)
Tammy Wynette, a track that will be particularly poignant for fans
who remember the tumultuous Jones/Wynette relationship and how
Georgette was no doubt affected by the pain.
Two new, non-Jones, tracks are included
here, but certainly seem right at home. Kershaw shrewdly chose the
original “Do You Know Me” (Johnny Holland / Billy Lawson) as the
album’s title track, rather than taking an easier route. In
essence, the lyrics of the song could equally relate to the lives of
either Jones or Kershaw… or both.
The other original, the self-penned
“The Route That I Took,” closes out the album, and the moving
lyrics are almost a teaser for an autobiography that Kershaw has
hinted will be forthcoming.
When it comes to tribute albums, you’ll
never please all the people all the time because, by their very
nature, they invite comparisons with the original. In the case of DO
YOU KNOW ME, the tribute truly works – for fans of George AND Sammy
– mainly because of the love and respect that comes through with
Kershaw’s performance.
After fifty years of payin’ dues
I still work and I still sing the
blues
Do you know me?
# # #