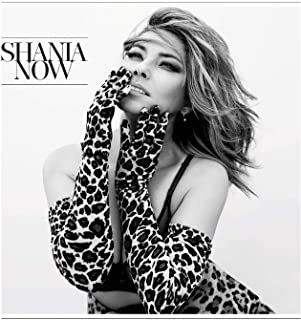 1. Swingin ‘With My Eyes Closed.

5. Who’s Gonna Be Your Girl

9. We Got Something They Don’t

It was the sensational comeback of the year:
Country and pop icon Shania Twain presents “Now” after a 15-year
break, a new studio album.

Before we take an detailed look at the new
work, we want to outline the vital statistics of this exceptional artist:

Eileen Regina Edwards, her real name, was
born in Ontario, Canada in 1965, later she was named “Shania” after
an Indian word, the last name comes from her stepfather Jerry Twain, who died
in a car accident in 1987 with her mother .

Her musical career began in 1993 with the
first album “Shania”, of which one million copies were sold in the
USA. The second album “The Woman In Me” has already found 12 million
buyers. Originally musically at home in the country scene, the album “Come On
Over”, released in 1997 and newly mixed in a country pop version, became a
bridge into the world of pop music.

Hit after hit followed, with the title
“That Don’t Impress Me Much” even making it into the top 10 German
pop charts for the first time.

The follow-up album “Up” from
2002 (with the well-known title “Ka-ching” in Germany) went platinum
several times in the USA after the predecessor “Come On Over” had
already been the best-selling solo album by an artist of all time.

Apart from the release of a “Greatest
Hits” album in 2004, there was nothing new until this year, mainly due
family and health reasons.

Shania uses 12 songs she composed not only as
a sign of life again, but also to process her own past. The message of the
album is that negative events always follow positive events, which is already
reflected in the first (also released as a single) piece “Life’s About To Get
Good”.

Many titles are self-explanatory, so to
speak, such as “Poor Me”, which has a sad content (the divorce from
her husband), but does not drift away in self-pity. “Home Now”
signals someone who has found the way back to who they are. All in all “Home Now”
contains a lot of things that are thoughtful, but the positive message is
always in the foreground.

Musically, the album has a lot to offer,
from the Irish-folk-inspired “Home Now” to rock numbers like “We
Got Something They Don’t” to the retro sound of “Who’s Gonna Be Your
Girl” (the one most likely to be old) Shania Twain title like
“Forever and For Always”.

Expressive piece is “Soldier”,
which gives the feeling that a Billy Joel is playing the piano, vocally
convincing above all “More Fun”, in which Shania calls up the full
range of her voice, and the timbre in “Light Of My Life” .

Listening to Shania Twain again and again
is a pleasure (especially after such a long break), all titles sound very
pleasing, but there is no great hit potential.

However, due to Shania’s unmistakable voice
and her fame, the album should still attract a lot of public interest.