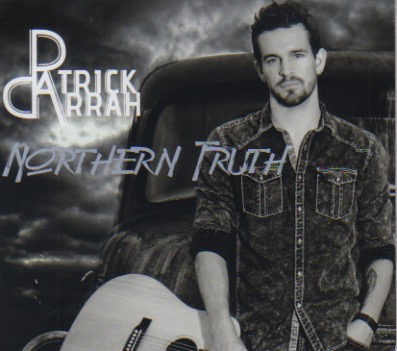 In common with a lot of country artists,
Patrick Darrah grew up in a town so small town that it didn’t even have a stop
light and where he naturally joined his family’s four-generation auto body
business.  But in Darrah’s case the small
town is Bloomingdale, New York, and his home town is the inspiration for the
title of his debut full-length album, NORTHERN TRUTH.

The ten tracks on the album give a hint of
the music he listened to on the body shop’s transistor radio – George Strait,
Marshall Tucker, Gary Allen – but this is no ‘classic country tribute’ album.
Darrah’s voice is all his own and the song selections are definitely in the
here and now.

“I Never Got Over You,’ the first single
from the album, is from the point of view of someone who feels he’s been a lot
of places, done a lot of things, but there’s one thing he’s never been able to
do. “I never got over you, I never came close / After all that we’ve been
through, I just couldn’t let go.” Darrah walks a fine line between sadness and
fond recollection.  In a particularly
poignant line, he sings, “I blame it on this little red thing in my
chest.”  Literally, a heartfelt lyric.

The album kicks off with the uptempo
‘Colorado’ that matches the pace of the storyteller driving anxiously with a
stash of ‘contraband’ under the seat. He’s turned outlaw since the factory
closed down and he does what he’s got to do to feed his wife and kids “til my
luck runs out.”  There’s something of a
Springsteen feel about the song, with its theme of a working guy going bad for good reasons.

The sensitive ballad ‘You Make It Look Easy’
tells of meeting a former lover who doesn’t even seem to remember your name.
“You’ve got a talent for deceiving / You’re an expert at leaving,” he sings
about someone who’s a natural at forgetting all about past love.

A standout track is ‘Mama Left the Radio
On,’ about remembering life with a hard-working single mom who’d come home from
work to tuck him in to bed and leave the radio playing so he wouldn’t feel
alone. It’s a touching song (written by Brad Wolf and Phillip Moore) that will
mean a lot to anyone who has been in that situation.

The theme of dealing with loss, heartache
and life’s hard knocks runs through NORTHERN TRUTH. But the album is anything
but a downer, thanks to Darrah’s confident vocals and some of Nashville’s
finest musicians behind him.

NORTHERN TRUTH is a strong debut album, and
we’ll be hearing more from Patrick Darrah. Find tour dates and music at www.patrickdarrah.com  and www.facebook.com/patrickdarrahmusic

·
As country music becomes even
more popular in Europe, artists like Patrick Durrah are building fan bases
overseas. You can watch an interview that Darrah did in February with ChristianLamitschka for Country Music News International.