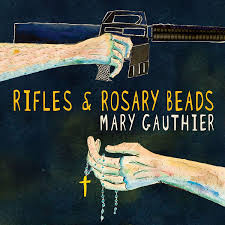 Rifles & Rosary Beads by Mary Gauthier is an important document.

One that sits comfortably with the work of giants like Woody Guthrie,
& Johnny Cash.  It is a complete
social statement of the condition of the American Soldier.

This record does not incorporate a political stance.  While nothing could be more political than
war, we are spared any slant to the right or left in favor of the personal
struggles and victories of those living through them.

In order to accomplish her mission, Mary goes straight to the
source.  She co-writes most of these
songs with individuals who have lived through the experiences that are
documented.

I will attempt to briefly highlight some the material here.  I will be delicate and honest with these
sensitive stories.

The title track ‘Rifles & Rosary Beads’  reminds us that we “hold on to what we
need”.  This is true depending on
where we are, who we are with, what is in front of us, and our own frame of
mind.  We hold on to that which can save
us and defend us.  The soldier’s rifle is
a weapon of defense as well as offense.
The Catholic Church teaches us that the Rosary is the most powerful weapon
we have in our spiritual conflicts.

‘Soldiering On’  expresses the
indoctrination that a soldier is “bound to something bigger and more
important than a single human life.”

Some may find this disturbing, some may disagree, the purpose here is
not to debate, but rather to shine a light on the internal motivations that
gives movement and meaning to the efforts of battle.

‘The War After The War’ is a testimonial to the partners of the
soldiers who have suffered the misery of having their beloved deployed in
battle, and then coping with the person who has returned.  These individuals who have spent countless
hours in prayer, in therapy, in solitude.
Now, out of love and devotion, they care for someone who is often a
stranger in need of special attention and patience.

‘Bullet Holes In The Sky’ begins with a description of a typical
Veteran’s Day.  The “we support our
troops”, the “thank you for your service” mantras.  These sincere, but often, hollow greetings
that seem to echo in the cosmos and in the heads of many of our Veterans.

‘Brothers’ is the call for recognition and acknowledgement of the
service of our female members of the armed forces.  It powerfully describes the hand to hand,
shoulder to shoulder, face to face work that is carried out in equal measure.  It brings to light the desire and the demand
for equality.

‘Iraq’  is perhaps the most
tragic song in this great manifesto.  It
exposes the subject of harassment and violence against women perpetrated by
their own compatriots.   It sets forth
the good intentions of the women.  It
details the crimes.  It identifies the
enemy.

There is much more in this record that I will leave to the curious and
the conscious among you.  This is not a
party record, although it is a celebration of courage and love.  You will be a bigger, better person after you
hear it.  Wherever you may be in the
world, you will look at the PEOPLE in your own armed forces in a more pure and
clear light.  You will view them as
humans, as brothers & sisters, you will want to help them.

Mary Gauthier received a Grammy nomination for this album.  She has toured the planet with this
message.  She has talked the talk and
walked the walk.  I am certain that you
will greatly respect this truth.