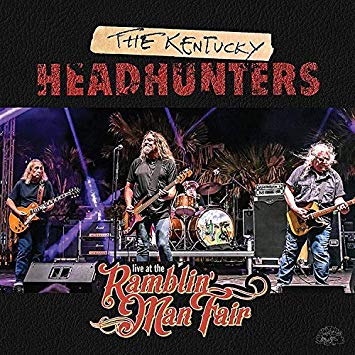 LIVE AT THE RAMBLIN’ MAN FAIR

It seems impossible, but it’s true: The
Kentucky Headhunters just keep getting better with every new album.  These guys have been my buds for decades from
way back in our FFA days in my home state of Kentucky.  They have always embodied a unique mix of
hard-nosed Country, Southern Rock, blues and good old rock n‘ roll.

The best way to enjoy the Headhunters has
always been live as they let rip on stage. A new release from Alligator finds
them doin’ their stuff at the Ramblin’ Man Fair, in Maidstone, England.

This was (unbelievably) a stop on their
first-ever European tour during a career lasting 30+ years. It seems that
vocalist/guitarist Richard Young has always been an ‘uneasy flier’ and couldn’t
face a transatlantic flight. Apparently, his son John Fred – drummer with the
rock band Black Stone Cherry – was finally able to talk him into the tour that
took place in 2016. Around 25,000 fans roar their approval as the Headhunters
tear through a high-energy set that includes Headhunter originals, their unique
versions of blues rockers, and a cover version of The Beatles’ “Don’t Let Me
Down,” joined by Black Stone Cherry. The excitement is contagious: this is an
album you’ll want to play LOUD!

Speaking about The Ramblin’ Man Fair set, Richard
Young said, “We didn’t even know we were being recorded. I found out later the
festival folks recorded our whole set. After hearing it, I knew it captured us
exactly as we really are, and I knew we had to release it.”  The audio quality is remarkable and captures
the essence of the Headhunters’ rowdy but musically spot-on live mayhem. The
remarkable performance from 2016 (plus the bonus cuts with Johnny Johnson) was
released by Alligator Records on January 11, 2019.

A Personal note:I think I need to add that the album is
killer, and it a shame I wasn’t visiting my nephew in Maidstone when this was
recorded !! 🙁  My loss for sure!

BTW, looks like Richard has overcome his
flying phobia. The Kentucky Headhunters are already working on plans for their
next tour of the U.K., Europe and across the USA and Canada.

Album info and more at https://www.alligator.com/albums/Live-At-The-Ramblin-Man-Fair/