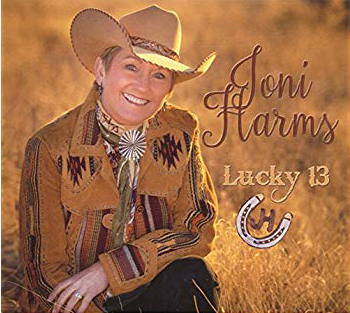 Joni Harms occupies something of a unique
place in music: a female recording artist who really lives the cowboy – or
cowgirl – life.  She still lives and
works on the family farm in Canby, Oregon, that was homesteaded by her
great-great grandfather who was an immigrant from Germany.  When she sings about the life of a rancher,
you know it’s real: she lives it.

Now comes her thirteenth studio album,
aptly titled ‘Lucky 13.’ That might seem like she is tempting fate, but for
Joni, the number thirteen has a special significance for a number of reasons.

‘Bless the Farmer’ is a heartfelt anthem to
the unsung heroes who are at work before dawn in every kind of weather: “God
bless the farmers working seven days a week / Lord knows without ‘em we
wouldn’t eat.” It’s a catchy, upbeat song that’s easy to love.  As someone who grew up as a member of the FFA
(Future Farmers of America) I can picture this song being belted out by all the
attendees at the next national FFA convention!

When Joni sings that she’s been “bucked,
kicked, stomped and bit” in the song ‘Cowgirl Tuff,’ you can feel she’s talking
from experience. But she isn’t asking for sympathy; the jog-along song lets you
know she wouldn’t have it any other way as she sings, “Better get back on our
horse and ride because we’re cowboy tuff,” and you bet she is. This track has
echoes of ‘Cowboy Up,’ a song that Joni wrote a few years back for Chris LeDoux,
a kindred spirit of hers who was both a great country singer and also a hall of
fame rodeo rider.

Joni’s sense of humor and positive attitude
is evident in every track on this album – even when expressing a playfully
‘negative’ opinion of bean curd on ‘Tofu.’ Even vegetarians should smile when
they hear this toe-tapping, fiddle-led Western swing ode to the real thing
instead of tofu. Well, she IS a cattle rancher!

Listening to Joni’s music, it’s apparent
that she’s a Merle Haggard fan. With the gentle ballad ‘Merle,’ she pays
tribute to her hero, telling how he became an inspiration to any aspiring
singer trying to lift themselves out of bad circumstances to find success
through their music. Joni reminds us that “Country heroes never die.”  It dawns on the listener that many of the
tracks on this album would have appealed to Haggard, and in your imagination
you can almost hear him singing them.

Joni’s influences extend beyond Haggard to
encompass Dolly Parton, Emmylou Harris and George Strait, and those influences
are detectable in several of the tracks on ‘Lucky 13.’  There’s a whisper of the Dolly/Emmylou
touches in the moving ballad ‘There’s No Way I Can Love You Anymore.’  Hint to brides to be: you’re gonna want this
as ‘your’ song at your wedding. Put a box of Kleenex on every table at the
reception!

Every track on this album is a delight from
the feel of boots shufflin’ on a dusty barroom floor as the jukebox plays ‘I
Can See It In Your Eyes’ (a duet with co-writer Jim
Varsos) to the down-home good fun of ‘Horse Sense.’

Joni is the real deal. Not only is she a
hard-working family rancher, but she applies that work ethic to her music
career too. She hits the road on radio tours with her guitar, playing acoustic
versions of her songs in the studios of radio stations large and small to reach
new fans. And she undertakes a tough touring schedule with recent tour dates in
Europe and Australia. As a mark of her international influence, ‘Lucky 13’ was
recorded in County Longford, Ireland, with producer Des Sheerin, combining the
talents of musicians from both Nashville and Ireland.

Listen to ‘Lucky 13’ and you’ll know why
Joni has been the recipient of so many Western music awards and – more
importantly – has built a legion of fans worldwide.

For more information on Joni Harms and to
order a copy of the album, visit http://joniharms.com/index.html