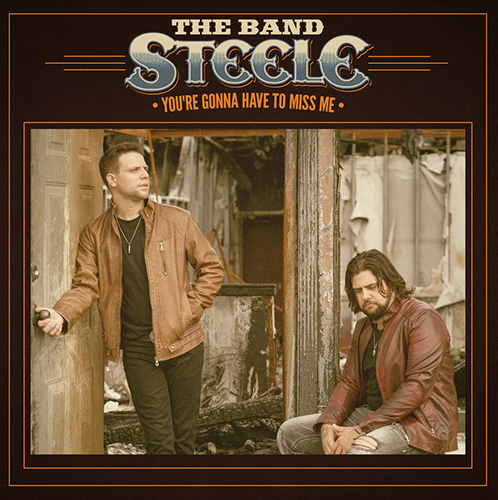 “You’re Gonna Have to Miss Me”

The Band Steele aren’t letting the current
pandemic slow them down, even if they can’t play in public venues and meet and
greet their fans. Before the pandemic, they have opened for top country acts
including Maren Morris, Hunter Hayes, Lee Brice, Diamond Reo and John Michael
Montgomery. Their original song releases such as “Sit Awhile” and “Victory in
Jesus” have won them millions of fans. (See The Band Steele by the numbers,
below.) Like many artists, they are livestreaming their “Quarantine Sessions”
on Sunday evenings via Facebook, but they are also releasing new music.

Just released: “You’re Gonna Have to Miss
Me,” the new single from Bo Steele and Ben Rubino, the duo known as the Band
Steele, the follow-up to “Copper Coil.”.

It’s a mid-tempo, emotional ballad with the
guy telling his girl that he’s leaving his hometown to follow his dream to
Nashville and “I’ve left my old songs behind” but he’ll be back someday. It’s a
heartfelt song of lovers parting, not knowing what the future holds.

Girl, you don’t believe me when I say it
won’t be long

This is a country song for sure, but there
are pop and southern rock influences here with a strong vocal treatment
reminiscent of Darius Rucker without feeling at all derivative.  The skilled production puts Bo’s vocals and
Ben’s harmonies front and center with a strong guitar-driven instrumental
backing.

The Band Steele has been on a rapid rise
since the release of their 2017 debut album Moon in a Mason Jar (Fire
River Records), four singles to Country radio, including the Top 30 “Waiting on
Sunshine,” airplay on Christian radio with “Victory in Jesus” plus five music
videos and numerous TV appearances.  With
a second album in the works (produced by Grammy-nominated Matt McClure) The
Band Steele will be keeping their many fans happy meanwhile with “You’re Gonna
Have to Miss Me.”

Although this song was written and recorded
before the world knew about the current Covid-19 pandemic, there is one line
that really seems appropriate right now:

Baby you can put your mask on

But it can’t hide the pain in your eyes

No, it’s not that kind of ‘mask,’ but the
song’s message of being apart from those we love might strike a special note
with listeners who are feeling the pain of separation.

Music and more info at https://thebandsteele.com/ and on
Facebook at https://www.facebook.com/TheBandSteele/

The Band Steele by the numbers: