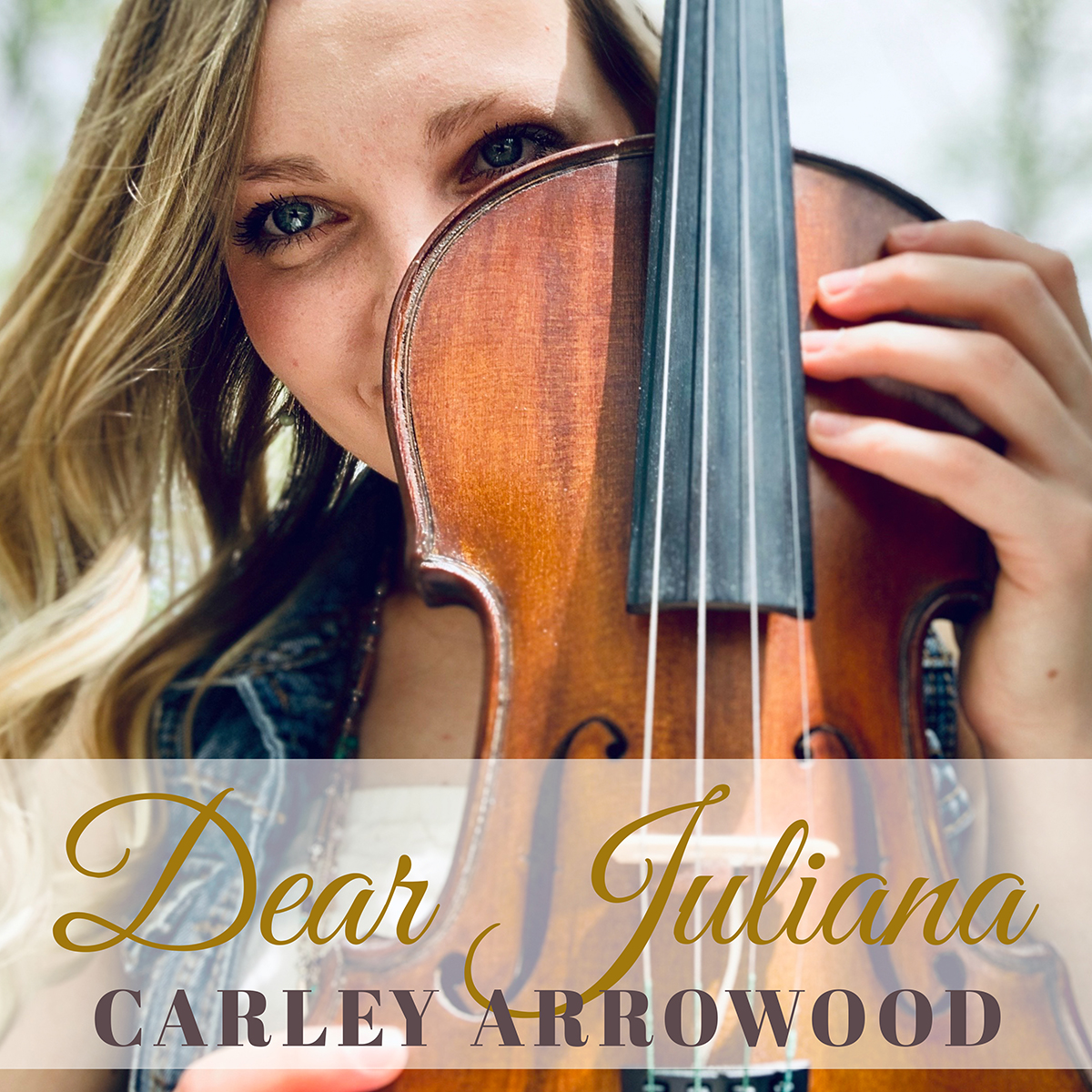 There’s
something special about seeing an artist take a first step into the
spotlight of a solo career —and today is just that moment for North Carolina singer, songwriter and violinist Carley Arrowood.
For those immersed in the world of bluegrass, her name may already be
familiar from her years as an accompanist who’s appeared at venues as
famed as the Grand Ole Opry, but now she’s stepping out
on her own with a deeply personal approach to every aspect of her
music, from original songs to moving vocal performances to supple,
distinctive instrumental work.

On her debut single for Mountain Home Music Company, Arrowood captures the priceless moments of childhood from the perspective of a dad watching his little girl grow up. “Dear Juliana” — a song Arrowood says
is one of the easiest God ever let her write — matches a heartfelt,
heartwarming story to a sweetly resonant melody and subtle, sympathetic
harmonies and instrumental support.

The sweet song was inspired by a true life story that Arrowood came to know after penning the track only from the name of her fiddle. Daniel Thrailkill (guitar and harmony vocals), Kristin Scott Benson (banjo), Wayne Benson (mandolin), Paul Watson (bass) and Autumn Arrowood (harmony vocals) join her to weave the pieces together.

The idea came to her after visiting with Bob Kogut, who
built her instrument. As he was installing her pickup, he told her each
fiddle he builds is named and each has a significant story behind it.
Hers was called Juliana, after the granddaughter of his close friends.

“When
he told me about this little red-headed, blue-eyed girl, and her
special relationship with her dad, I immediately related because I’m a
daddy’s girl, and I had a vision for the song. I wanted to write it in
the perspective of a dad, as he’s watching his little girl grow up
through the years. He recognizes the small but priceless details of his
daughter’s childhood, and is jotting them down in a journal or baby book
as they come to mind,” says Arrowood.

When Arrowood finished the song, she and Thrailkill took a video of it and sent it to the real Juliana’s grandparents
as a surprise. “Her grandmother responded saying she was in tears, and
that I had no idea how the song was such a blessing to them,” says Arrowood.

Then the family shared a part of Juliana’s story Arrowood hadn’t heard. “When she was a baby, Juliana was
kidnapped by her own mother, and for almost six years her family
searched for her. It was on the news, and people around the country were
praying for her to be found. God answered in His timing, and she was
found safe,” says Arrowood. “When I read this, there
were certain lines of the song that suddenly came to have deeper
meanings than originally intended, and it made the song come to life
more. I couldn’t believe how God orchestrated this. The story goes on,
and Juliana’s dad now has full custody of her. She has a
very happy life with him and her sweet grandparents, stepmom, and even a
new baby sister! She just celebrated her 9th birthday. Some of her
favorite things are swimming, going to the beach, holding her baby
sister, singing, and dancing. You’ll find a fun section in the song with
this imagery!”

While Arrowood has yet to meet Juliana
and her dad, she says she can’t thank them enough for letting her tell
their story. “Their faith in God is amazing and it is a lesson to me to
just trust Him more. He works all things for the good of those who love
Him,” says Arrowood. “My hope for this song is that it
helps listeners to just take a breath and think about all the little
details of life, especially with their children or young siblings or
family members. Cherish every moment because time flies, and all the
moments are precious.”

Radio DJs can download the song for radio play HERE through AirPlay Direct.

Though she’s young, Carley Arrowood is already something of a musical
veteran. Singing since she was old enough to talk, she’s been playing
fiddle for over thirteen years, and has spent the past five years as a
featured bandmember with the award-winning duo of Darin & Brooke
Aldridge.

Carley began playing in a classical vein, but soon gravitated toward the
bluegrass music and fiddle tunes of her western North Carolina home.
With her sister, Autumn, she formed a band called Carolina Jasmine,
which became the first all-female group to win the Junior Band
Championship at the famed Fiddlers Grove convention. Her career progress
flourished through high school, as she began to work at Dollywood,
competed in — and took home trophies from — an impressive list of fiddle
contests, and became one of the featured musicians in the International
Bluegrass Music Association’s (IBMA) annual Kids on Bluegrass program.

A
developing songwriter — her “Jesus Drive The Train,” a co-write with
the award-winning Becky Buller, earned her a showcase appearance at the
IBMA’s World of Bluegrass in 2015 — Carley’s been recognized for her
fiddle playing as well, receiving an IBMA Momentum Instrumentalist of
the Year trophy in 2017. And in 2014, just a day after graduation,
Carley began filling in with Darin and Brooke, joining them full-time
that fall after turning 18. She performed with the duo at the Grand Ole
Opry, on television shows like “Larry’s Country Diner,” on European
tours and at bluegrass festivals and concerts around the country. Now,
she’s beginning her solo career, with seasoned talent and a voice all
her own, ready to share her perspective with original songwriting and
moving vocal performances.