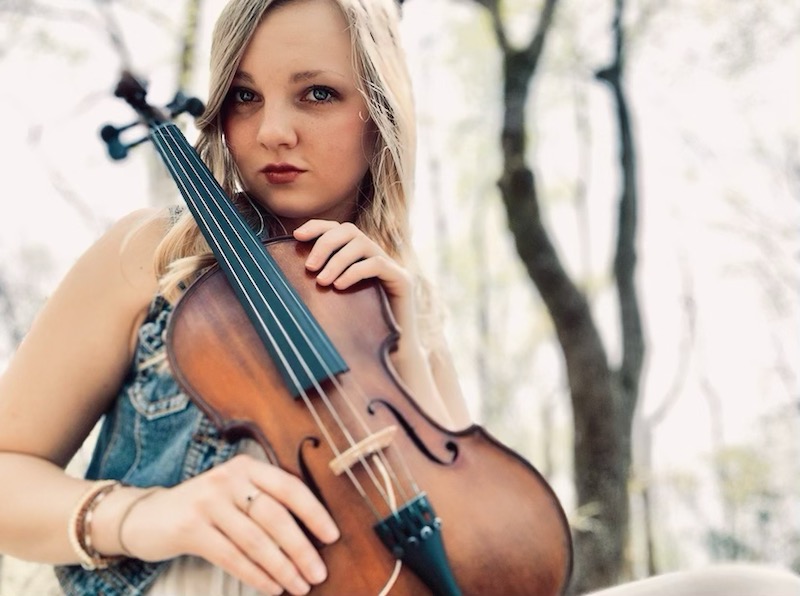 1.) Please tell us about the songs on your album.

A:
My new album is coming out on Mountain Home Music Company, and I’m so
thrilled to be on their roster of amazing artists. Most of the songs on
my album are original material. There will also be some instrumental
songs: one Kenny Baker fiddle tune and one instrumental that I wrote.
I’m so excited to be recording new songs that have never been heard
before! I love songs that have a great, tug-at-your-heart story or
lesson, with a positive message especially in this world now, and that
is what this collection of new tunes will be. My goal is to have a
unique sound and style all of my own, that will leave people feeling
something and wanting more, and I think this album will do just that!

2.) Did you write the songs yourself? If not, how do you go about finding the songs for your CD?

A:
I wrote close to half of the songs on my album, with a couple of them
being co-writes with some of my favorite singers/songwriters in the
bluegrass music industry. The other half of the songs were written or
co-written by my producer Jon Weisberger. While getting things ready for
the album, Jon sent me some songs to listen to and pick from. I chose
songs that I resonated with deeply and personally, and I have hopes that
my audience will react in the same way. The songs are amazing and so
much fun to sing.

3.) Your current single is being played by radio. What do you feel is special about this song that makes people want to hear it?

A:
I have two singles out right now. One on bluegrass radio and the other
for Christian stations. The one out there for bluegrass is one I wrote
called “Dear Juliana.” It’s about a sweet little red-haired girl and her
relationship with her dad, and the song kind of goes through her
childhood from the perspective of her dad watching her grow up. Its
tender lines and melody I think hit home with a lot of people, as
parents of small children (and even children who are grown) have related
to it so very well. It just subtly teaches listeners to enjoy the small
moments of life, because time truly does fly.

The
other song I have released is a gospel song wrote almost four years ago
called “The Ballad of Calvary.” It tells the story of Christ’s
crucifixion in a minor key and a Celtic sound. I wrote it after watching
the movie “Son of God,” and seeing the scene where Jesus is walking
through Jerusalem carrying His cross. It was written in five days and I
was able to sing it at church that Sunday. It’s been a super cool thing
to finally get it out in the world and I really hope people get a
blessing out of it.

4.) How much creative control do you have over your music?

A:
I am so blessed to be able to have a lot of the control over the
creativity in my music. I am definitely right-brained and wired to be
imaginative and creative, and Mountain Home recognizes that and has been
so great to work with me and share their ideas, and help me bring my
ideas and visions to life. I can’t wait to see what else we can create
for y’all. It has been an absolute blast, and it’s only the beginning!

5.) Is there any place you haven’t played that you would like to?

A:
Well, I’ve had people telling me since I was little and first started
playing the fiddle that I’d make it to the Grand Ole Opry someday, and I
did get to play it for the first time in 2017 with Darin and Brooke
Aldridge. I traveled with them for over five years and the Lord blessed
us and I was able to perform on that stage many times, as well as a lot
of other stages that I could only dream about. But to be able to go back
to the Opry as me, performing my new songs on that amazing, historical
stage to the ever so welcoming audience—that would be a dream come true.
But God has been so good already, and if that opportunity never comes
again, I’ll have those memories to cherish.

6.) What moments in your career stand out in your memory as highlights and achievements which you are proud of?

A:
Ah there are so many instances that come to mind! Like I mentioned in
the last answer, I played with Darin and Brooke Aldridge for over five
years. I’m so blessed to have what I have under my belt already thanks
to them. We played the Grand Ole Opry for the first time on July 4th,
2017, and we were with John Cowan that night as well. My whole family
and some extended family got to come watch, so to say that was a
highlight and a dream come true would be an enormous understatement. A
couple other awesome memories are getting to travel to Europe twice in
one year. We played in Prague, Czech Republic with John Cowan, and the
people there were just so sweet and welcoming. They didn’t speak really
good English at all, but we were still able to connect with them through
the music that they have loved for so many years. John is a legend over
there! One man came up to the record table after a performance with
tears in his eyes, saying in broken English how much John had inspired
him, and how he’d learned to play the bass because of John. It was one
of the most precious things I’ve ever witnessed. John was so moved by it
as well. We also got to go to Ireland later that year, for performances
at the Ulster American Folk Park in Omagh. That was absolutely another
dream come true, because I have always loved Celtic music and always
wanted to go to Ireland. It was so beautiful and again, the people were
extremely loving and welcoming. It’s so neat to be able to share such
wonderful music with people halfway around the world. Thinking about it
almost brings a tear to my eye. I really hope I get to go back to both
places, and more places in Europe.

7.) What’s the best compliment a fan has ever given you?

A:
When I read this question I immediately knew what I was going to say!
So, Ted Lehman is a photographer and has a bluegrass blog where he
shares his photos and writes about different performances. He and his
wife Irene go around to different festivals in the US. I’ve known them
for a while through Darin and Brooke, so he’d been watching me perform
for several years at this point. One time we were performing in Florida
and Ted and Irene were there. After the show Ted came up to me and
started telling me how amazing my fiddle sounded (I had just bought this
fiddle a little less than a year before, from a luthier in Lenoir, NC
named Bob Kogut, and it’s absolutely the best fiddle I’ve ever played. I
was telling Ted about it before the show.) Ted went on to say, “You
pull things out of that fiddle that I’ve never heard you do before, and
it’s really amazing. And the fiddle pulls things out of you that are
amazing too! It’s such a beautiful thing.” He was so sincere and it made
me a little misty eyed. Right then I knew that would go down in my
books as the best compliment I’ve ever received.

8.) What can fans expect to see when they see you in concert?

A:
I think people can expect to see and hear honest-to-goodness heartfelt
music. Anything from bluegrass to bluegrass gospel, to instrumentals and
some progressive sounds, to my own original songs and compositions is
what will be on my setlists. I don’t really like to play songs that
don’t do something to me or move me deep down or emotionally. That, to
me, is not much of a performance. I know and can tell from being in the
audience before when someone is really loving what they’re doing. When
you really feel it and love what you’re doing and are passionate about
it, that’s not just playing. So I know if I’m not feeling it then
chances are my audience won’t either. I hope everything I do will mean
something, and cause the listeners to leave feeling something, and
thinking, “THAT was a performance.”

9.) What hopes and desires do you have?

A:
For my music and throughout life, my goal is to always continue to grow
and learn everything I can. But there’s one thing to remember through
all that, and it’s the fact that music is a gift from God, and as
musicians we are called to spread the love of His Son Jesus everywhere
we go. It doesn’t matter if you play the best show you’ve ever done, if
you don’t give God the glory for it, you can guarantee that you will
ALWAYS leave feeling empty. I know that from experience. My desire is
that God stays the center focus of everything I do in life, and that the
light of Jesus will be seen in it all.

10.) What message would you like to send your European fans?

A:
Y’all are amazing! I just want to say thank you for your open arms when
I got to come a couple years ago, and I hope you will have me back as I
embark on this new journey in a solo career. I hope to see you all very
soon. Keep playing that bluegrass, and remember that Jesus loves you,
so very, very much.