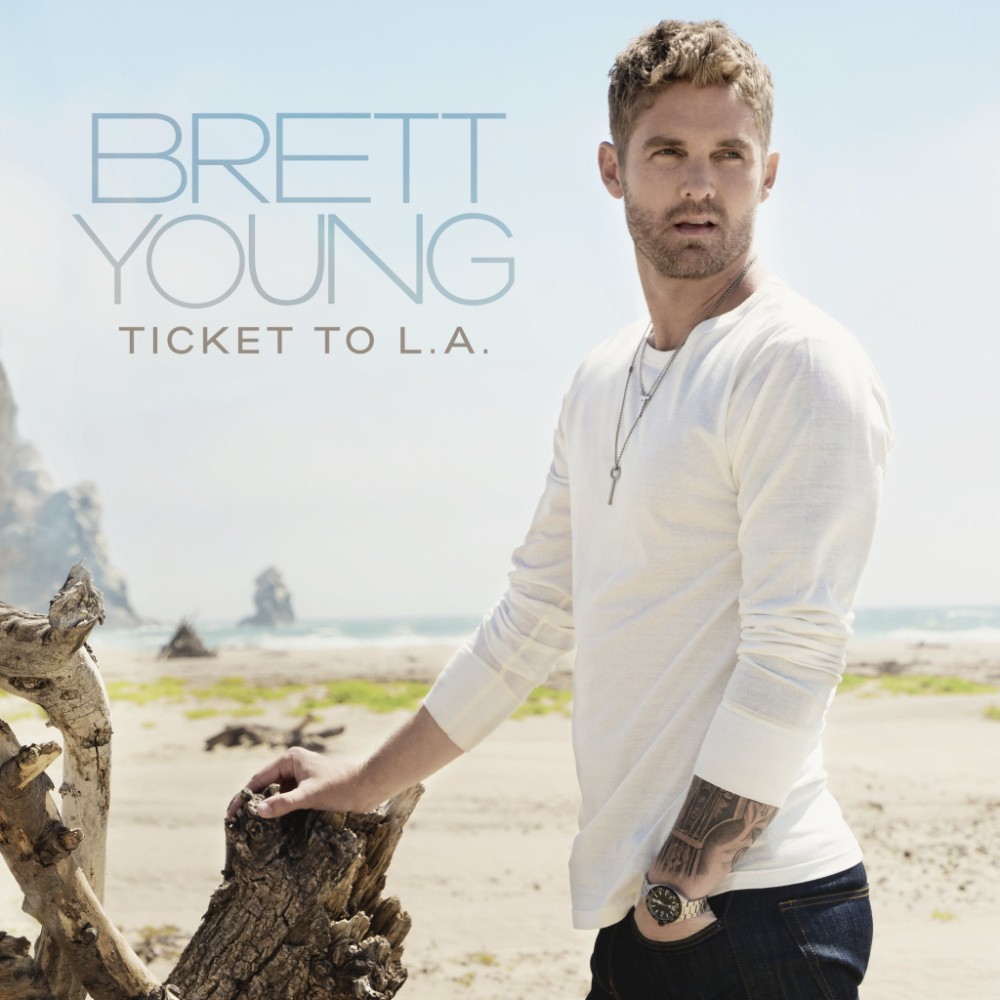 Nashville, Tenn. (Sept. 10, 2018) –
Multi-PLATINUM-selling Country star Brett Young is on the next leg of
his hit-making journey with TICKET TO L.A. His highly-anticipated second album is scheduled for takeoff December 7 on
BMLG Records and builds on one of the most successful new artist debuts
in recent history. Fans can pre-order the album now on BrettYoungMusic.com,
where a limited number of destination bundles are available
that also include either a California or Tennessee scented travel
candle, enamel pin set, hand-numbered poster, plus a signed CD booklet.

“It’s been four-and-a-half years that I’ve been in Nashville,” says
the chart-topping Southern California native. “A lot has happened, the
first record has been really good to me and I’m really, really proud of
it. But just having a new batch of songs – it’s like breathing new life
almost.”

After four straight PLATINUM-certified No. One singles, one 3X Platinum
smash and an ACM win for New Male Vocalist of the Year, that “new life”
will be easy to hear. Young worked once again with producer Dann Huff,
executive producer Jimmy Harnen and engineer/mixer Justin Niebank
on TICKET TO L.A., but was determined not to rest on his laurels. Mixing
classic SoCal charisma with Music City soul, the tempos are quicker –
while the heart behind each track remains front and center. The sonics
are more vibrant – still sophisticated but emboldened with a pinch of
playfulness. And the themes have shifted toward
cool-and-collected romance. Young admits that fans will have a lot to
explore, but stresses his new approach is an evolution, not a
reinvention. He once again digs deep into his personal life for
inspiration, which now includes a wedding engagement and a long list
of career milestones. He revisits the sensitive crooner evident
on his previous No. 1s (PLATINUM “Sleep Without You,” 3X PLATINUM “In
Case You Didn’t Know,” PLATINUM “Like I Loved You,”
and PLATINUM “Mercy”) – but is also living in the moment on flirtatious
new tracks such as “Catch” and “Change Your Name.”

“I decided to name the album TICKET TO L.A. because flying home to Los
Angeles has become such a big part of my life,” Young explains. “A lot
of the first record reflected a kind of hard point in my life when I was
moving from Los Angeles to Nashville, but I’m in a completely different
place now. I’m so happy, and I think you can really hear that shift on
the new record.”

Young trades vocally stunning lines about life’s ups and downs with Pop
icon Gavin DeGraw on “Chapters” while expressing personal sentiments
co-writing 10 of the album’s tracks alongside Shane McAnally, Hillary
Lindsey, Lady Antebellum’s Charles Kelley and more. Broadening his
choice of topics to paint clever character studies as reflected in the
title track, the new music is filled with a swaggering
confidence that suggests Young is finally at ease with himself as a
country artist. TICKET TO L.A. reveals a man of two different worlds,
exploring a true depiction of Young.

Currently nominated for CMA Awards New Artist of the Year, Young has built a dedicatedfanbase
since the first glimpse of breathtaking vulnerability with his 2016
debut. Quickly establishing himself as one of the genre’s newest
superstars, Young became the first debut Country artist since 2014 to
garner 3X PLATINUM certification with “In Case You Didn’t Know.” The
smash hit’s official music video is currently closing in on 200 million
views, and Young was the only artist of 2017 with two videos on VEVO’s
Top Country Videos list. Fans have flocked to hear Young’s distinct
sound live, selling out every single stop on his debut headlining
Caliville Tour. He’ll continue on the road with Thomas Rhett’s Life Changes Tour, and will headline this year’s CMT On Tour – dubbed Brett Young’s Here Tonight Tour – beginning November 16 in Royal Oak, Michigan. For additional information, visit brettyoungmusic.com.