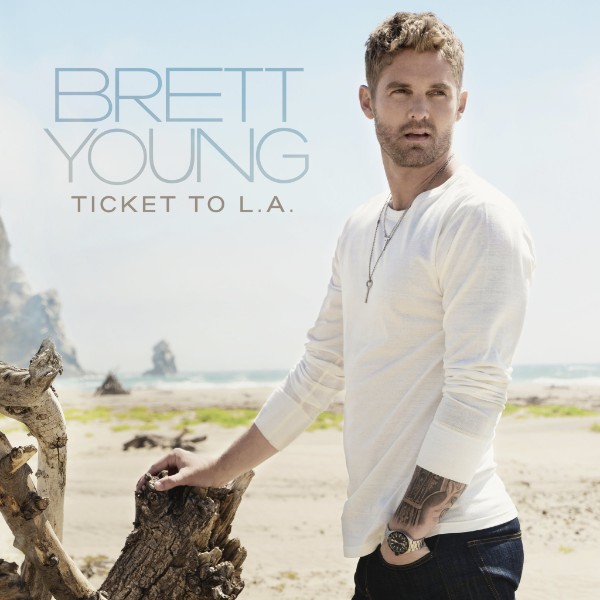 Current CMA Awards nominee Brett Young today released “Ticket To L.A.,” available everywhere digitally: https://BrettYoung.lnk.to/TTLALyric.
The title track for his upcoming sophomore album, due Dec. 7 on BMLG
Records, expands on a personal connection to the city, as his Southern
California roots have had a major influence on his music. Painting the
story of strangers sparking up a conversation and falling for each other
while waiting to catch a flight at the airport, Young co-wrote “Ticket
To L.A.” alongside Zach Crowell and Jon Nite.

“I knew we had to name the album after ‘Ticket To L.A.’ because that title sums up such a big part of my life,” Young told Billboard,
which exclusively premiered the track. “I’ve spent a lot of hours
flying back home to Los Angeles from Nashville. It was a tough season
when I first made the move, but so much has changed in my life since
then, and I’m in such a happy place. I think you can feel that shift in
the new music too, so I can’t wait for people to hear to the album.

“Ticket
To L.A.” is Young’s second offering from his forthcoming album of the
same name, which features his current single “Here Tonight.” Fans can
pre-order the 13-track project now on BrettYoungMusic.com, where a limited number of destination bundles are available.

TICKET TO L.A. follows Young’s self-titled RIAA PLATINUM-certified debut
released last year. Delivering four consecutive No. 1 PLATINUM-selling
hits, Young is leading the charge as one of Country music’s new class of
hitmakers. With his second single “In Case You Didn’t Know,” Young
broke a three year streak becoming the latest debut Country artist to
reach 3X PLATINUM sales. The accompanying video has also surpassed 200
million views marking him as the only artist of the year with two
efforts listed on VEVO’s Top Country Videos Chart. With his music being
streamed more than one billion times in the US (Nielsen Music Connect),
the ACM “New Male Vocalist of the Year” continues to impress the genre and beyond with nominations from Billboard, Teen Choice, CMT and is currently nominated for CMA‘s
“New Artist of the Year.” Above the industry successes, his
relationship with fans found Young selling out every single stop on his
debut headlining CALIVILLE TOUR and earning new followers on the road
with Thomas Rhett’s LIFE CHANGES TOUR 2018. His headlining CMT ON TOUR:
HERE TONIGHT is set to kick off November 16 in Royal Oak, MI. For
additional information, visit brettyoungmusic.com.

5. “Let It Be Mine” | Written by Ross Copperman, Shane McAnally, Jon Nite

6. “Where You Want Me” | Written by Brett Young, Jessie Jo Dillon, Shane McAnally

10. “The Ship And The Bottle” | Written by Nicolle Galyon, Chase McGill, Jon Nite