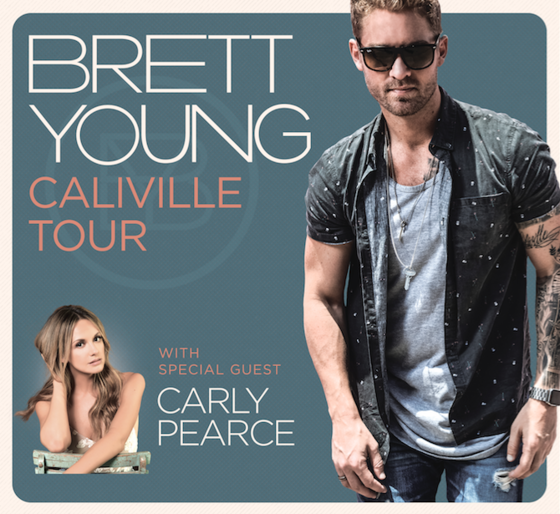 Young will perform songs from his self-titled debut (BMLG Records), which highlights his “melodic craftsmanship” (Billboard) with
No. One hits, PLATINUM Certified “Sleep Without You” and 2X PLATINUM
selling “In Case You Didn’t Know,” “one of this year’s most impressive
pop songs” (New York Times) along with the recently-released fast-rising single “Like I Loved You.”

Young has been on
the road performing for packed crowds on Lady Antebellum’s YOU LOOK GOOD
WORLD TOUR, drawing “his share of screams” (The Post Standard) as fans “(sing) along to almost every word” (The Plain Dealer). For tickets and additional CALIVILLE TOUR information, visit BrettYoungMusic.com.

Brett Young’s GOLD-certified “soothing, approachable self-titled debut album” (New York Times) (BMLG
Records) continues to make a big impression as only one of two Country
artists to hit that milestone with albums released this year. His latest
offering “Like I Loved You” is quickly rising at Country radio as it
recently entered the Top 30 on the Billboard and Mediabase Country
Airplay charts with the accompanying video at No. 2 on Vevo’s Top
Country Videos Chart. The single follows back-to-back No. 1 smashes,
including the PLATINUM-certified “Sleep Without You” and 2X PLATINUM “In
Case You Didn’t Know. “Young is quickly becoming one of country music’s
most reliable new hit makers…” (The Tennessean) and
the industry is noticing with ACM Award, People’s Choice Award, CMT
Music Awards, CMA Award and AIMP Award nominations. Breaking barriers in
the video format as well, he landed in Vevo’s Top 10 Videos of 2017 (so
far) with “In Case You Didn’t Know,” surpassing 120 million views and
joining the rankings with Zayn and Taylor Swift, Kendrick Lamar and DJ
Khaled. As Billboard notes, “…with a full
album’s worth of music for fans to divulge — and an opening slot on
Lady A’s tour all summer — his impact goes beyond the singles.”Fans and
critics are also raving about his live show, with The New York Times saying “… Brett Young renders deep feelings with thick polish.”

Kentucky native
Carly Pearce has never known a moment that Country music wasn’t her
destined path and as the only solo female currently in the Top 10 at
Country radio with her soul-bearing single “Every Little Thing,” her
dreams are coming to fruition. Life experiences and tenacious spirit
chronicle her 13-track debut album EVERY LITTLE THING, out October 13 on
Big Machine Records, with sought-after producer/songwriter busbee (Katy
Perry, Keith Urban, Maren Morris, Kelly Clarkson), emphasizing Carly’s
textured vocals and emotive songwriting prowess. The CMT Next Women of
Country alum has also been named an Artist to Watch across multiple
platforms – Youtube, Rolling Stone Country, The Huffington Post, Country
Living, Sounds Like Nashville, The Boot, Whiskey Riff and One Country –
and landed prominent features in The Washington Post, Billboard and
People. Blazing her own trail from the time she was 11 and performing in
a Bluegrass band, Carly has been invited to play the Grand Ole Opry
nearly 40 times, joined bills with notable artists such as Martina
McBride, Kelsea Ballerini, Kip Moore, Hunter Hayes, Lucy Hale and
recently opened for Eric Church on his HOLDIN’ MY OWN TOUR. For tour
dates and more, visit CarlyPearce.com and follow along at Facebook, Twitter and Instagram.