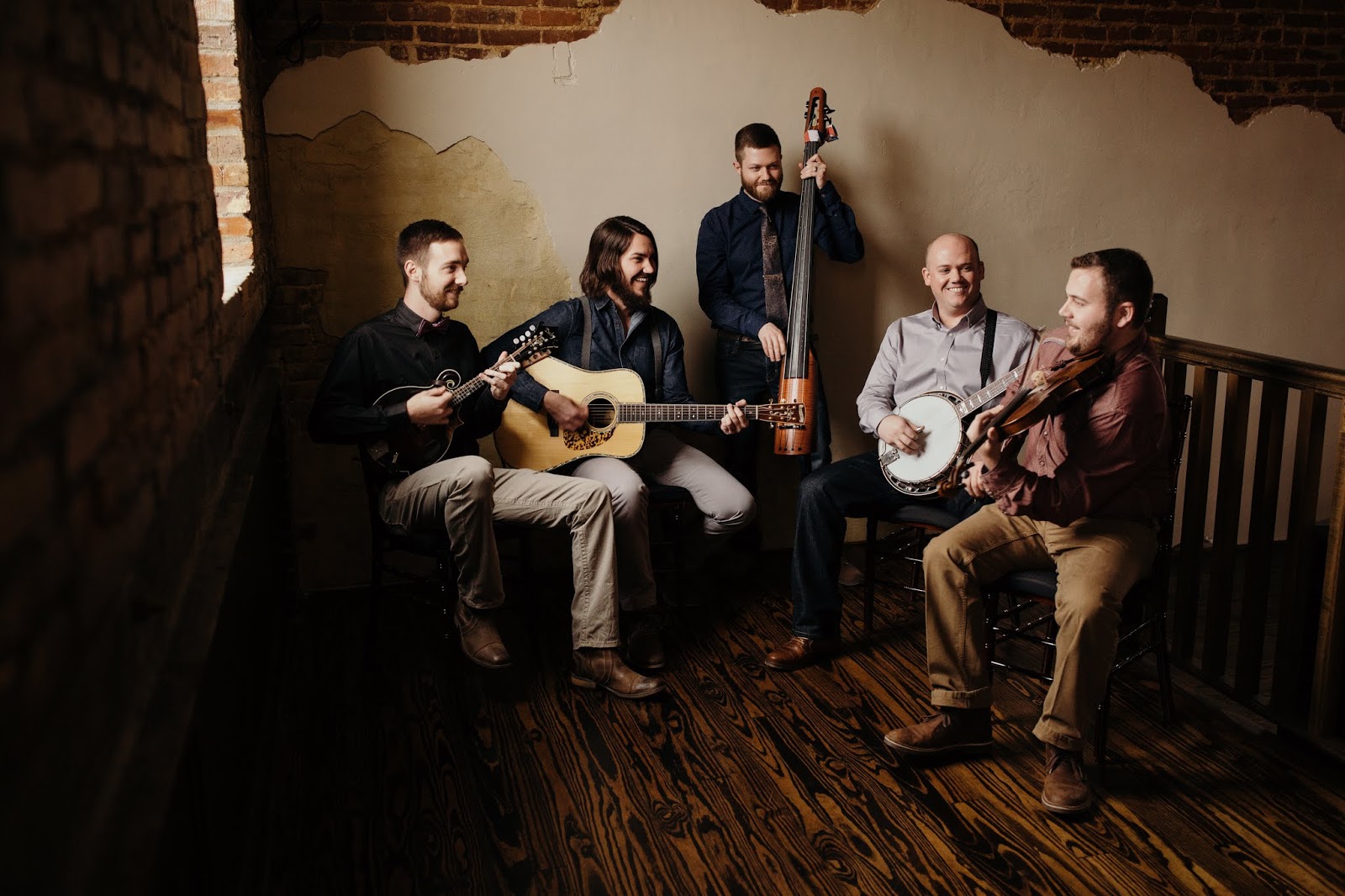 1. Music has many new fans throughout Europe
who may be hearing about you for the first time. How would you describe
yourself and the music you play to someone who has never seen or heard
you?

I
feel like we fit in the Bluegrass genre, but might also fit into folk,
acoustic country, Americana, progressive.. Grassicana is a more recent
classification and we have had some songs on those charts. We try to not
just be that bluegrass band; or just be that      Americana band. It’s
been said before, but when you label yourself as part of one genre, you
limit your audience. We want everyone that will give us a listen to have
something they can connect with.

2. Most careers don’t last as long as yours. What gives you staying power?

2019
will be 11 years that we have been together. Being a group that long
has so much to do with your support group. We all have family that not
only understands that most weekends during the year, we won’t be home,
but also encourages us to keep          pushing forward. Angela White
(Tyler’s mother) handles all of our booking. We owe a lot to her for
tolerantly dealing with our personal schedules and the schedules of
promoters. Another big factor are those special people that enjoy our
music and                  want us to keep releasing new material.
They’re really the driving force behind each next step. The other side
of the coin is keeping our egos in check. You can allow any amount of
fame or compliments to go to your head, and we’re pretty good about
keeping each other grounded.

3. Please tell us about the songs on your album (influences, etc.)

Our
latest album is titled “Warning Signs”. It contains all the instruments
of a traditional bluegrass record, but it’s scored in a progressive
way. Aaron Ramsey (of Mountain Heart) produced; with Mark Hodges (ceo
Mountain Fever) staying on for the                  recording process to
oversee. Its my favorite record that we have done. It’s a book of short
stories. “Nobody Knows” (that Britt Sheffield sings lead on) is my
favorite. A drunk drives his truck off of a bridge and the ice and snow
covers any trace  of the accident scene. Two adulterers are caught on a
back road and issued an unmarked grave for their transgressions. The
whole song is about the rumors that grow when someone goes missing and
there’s no trace left behind for the grieving. There’s  also one titled
“the one she adored”, where one character take the other on a hike to
the known hangout of a panther. After striking him down, the storyteller
climbs a tree and lets the cat do what hungry predators do.
Melodically, it’s a happy sounding song.    But, like several of the
tracks on the album, you don’t get that it’s deeper until the second
listen.

4. How much creative control do you have over your music?

Quite
a bit. The first two albums we did on our own. They were made under the
guidance of Stephen Mougin (of Sam Bush Band/Dark Shadow Recording) and
recorded at his studios. The last two have been through Mountain Fever
Records. When Mark Hodges (ceo) first contacted us about joining his
label, we asked him if we would have final say on what goes on the
records, and I’ll always remember what he said. He said, “I reached out
to you because I love what you guys are doing. I don’t want to change
that.”.  Mark and Aaron will be the first to tell us if something sounds
bad, but they trust us to bring our best to the table when it comes to
making an album they can proudly represent.

5. What is your favorite song among all the songs you have recorded & whats the story behind it?

My
personal favorite is one we don’t perform live anymore. It’s titled
“still the roses bloom” and is told from the perspective of an older man
revisiting the abandoned farm that he and his true love once cherished.
The first verse goes, “The fields have grown over. There’s weeds to my
shoulder. You can’t even tell the old barn was there. The silos are
empty. The lakes just a memory. It’s dried up and vanished like the love
that we shared.” Everything that they built together is in ruin, and
it’s just the saddest thing to me.  The only thing that looks untouched
by time is the roses he planted for her. “Still the roses bloom as if
they don’t know that we’re through.”

6. What do you think about today’s music scene versus it’s post and where do you see it going in the future?

Things
are definitely changing, but they always have. Some changes are for the
better. I remember when we first started, in some circles, it was
unacceptable for someone in our genre to play an instrument that was
plugged in. It all had to be through a microphone or you could lose part
of your crowd. Now, we perform with wireless instruments and most
audiences enjoy it more because we aren’t fixed in one spot for the
whole show. A negative change brought on by technology is people can
watch almost any artist’s performance, in it’s entirety, on their phone.
I feel like that’s keeping some from venturing out and supporting live
music. People that choose that avenue to consume music will never know
what’s it’s like to sing along with a crowd of people at a big festival;
or to get chill bumps in a theatre when Allison Krauss sings “Ghost in
this House.” You can’t get that from a phone.

I
don’t really know where music is headed. I’m hopeful, but a lot of
festivals have closed down and I don’t know that an equal number of new
ones have popped back up. A large number of people don’t use cd’s
anymore, so that keeps people from visiting the merchandise table after a
show. There are a lot of variables, but we’re still staying busy and
making new friends that like the music. We’re adapting and any band that
wants to stay going has to.

7. When you’re on tour do you have time to play tourist?

Not
usually. It’s funny because people always say, “It must be nice getting
to go see all those places and be on vacation every week.”. But, it’s
really not like that most of the time. It’s a lot of truck stops and the
occasional quick run into wal-mart for whatever you left at home. It’s
hotel stays, and living out of a bag, and tons of driving.. But, when
you finally get to the venue and get to be with the people and hear them
sing along with a song you wrote, it’s worth it.

On
the occasion we do get some down time, it’s worth it. We visited the
Yukon in 2016 (The Kluane Mountain Bluegrass Festival) and they went out
of their way to make sure we took in some of the sights while we were
there. They gave us the option of either a plane ride through the
mountains or a guided fishing trip on Kathleen Lake (which is one of the
most beautiful places on this earth you could ever visit). We went with
the fishing trip and it’s something I’ll never forget.

8. Who inspires you musically & how deep do your musical roots run?

This
is something the guys and I talk about quite a bit. We all have varied
musical backgrounds from rock, to country, to traditional bluegrass..
Some of our individual influences drives the others crazy. Britt and I
like 90’s alternative and pop and the others aren’t that big on it. I
love Gillian Welch, but she’s probably boring to some of the guys. Jody
likes traditional bluegrass and older country and after a little of
that, someone else will be trying to take over the radio. But, we all
agree on a few and have listened to their work repeatedly while on the
road. Cadillac Sky, Allison Krauss and Union Station, Carrie Hassler
& Hard Rain.. these songs and albums stay in rotation quite a bit
for us. I’ll never forget the first time I heard “Born Lonesome” by
C-sky. I cried because I had never had lyrics and music hit me like
that.

9. When you get time off how do you like to relax?

My
wife and I have a small farm in Mississippi and we love to spend time
with our animals there. We also love traveling to New Orleans for the
weekend with our friends. Jody doesn’t have a lot of free time because
his job keeps him on the road as well. But, when he is home, he is an
accomplished farrier. His wife is involved with horse showing
competitions and he shoes the horses and helps her in getting them
prepared for competition. Zach and his fiance have friends that they go
to escape rooms (not sure if that is a popular thing in Europe) and
football games with. He also does PRN work aside from his regular
Physical Therapy Assistant job. Tyler likes restoring classic cars and
hunting. He also races stock cars.  Britt has recently got into smoking
ribs and grilling and spends most of his downtime with his wife and
their new son, Henry.

10. Many fans today get their information about artists online. Do you have your own website and what will fans find there.

You can see more about us at www.breakinggrass.com.
It will have our full tour schedule as dates are announced. We are also
on Facebook, Instagram, and all of the major social media outlets. I
invite everyone to follow us and keep up with what’s happening with the
guys and I.