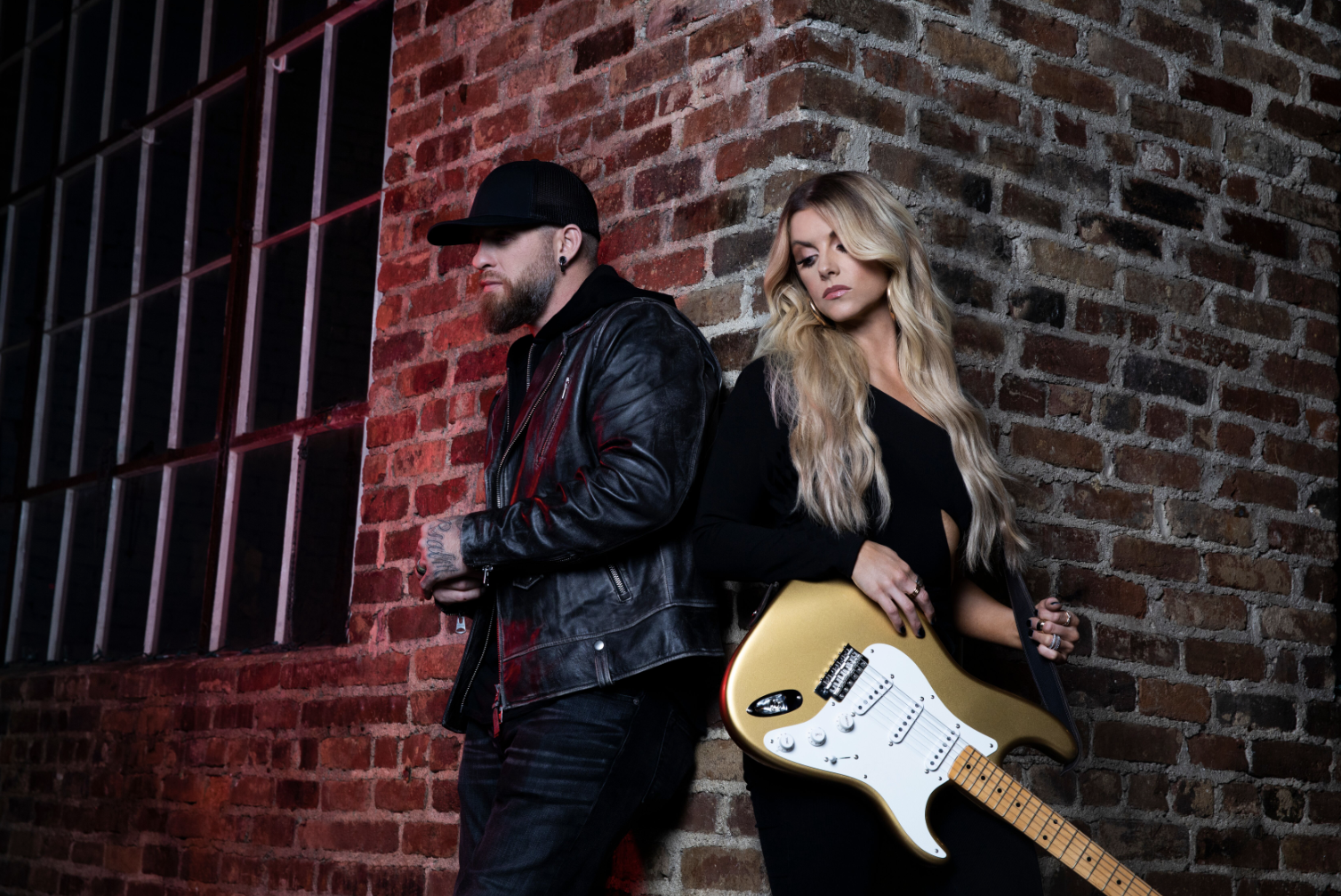 When Brantley Gilbert wrote “What Happens In A Small Town,” the lead single from his new, chart-topping fifth studio album Fire & Brimstone,
via The Valory Music Co., the southern rocking songwriter quickly knew
he needed an equally as hard-rocking female to portray both perspectives
of a break up in a small town. After playing the song for Lindsay Ell,
there was an immediate connection with the notion. Adding not just vocals but guitar, the result was one of the most-added songs at Country radio upon its debut.

“I want to give the fans a lot of credit for the life of this song,”
shares Gilbert. “From the beginning, they shared it, streamed it and
called up radio to hear it. I’ve been there — drivin’ around home seeing
all the people and places that I used to avoid to keep from thinkin’
about the one that got away. I think we all have that person, those
people, those places… and this song.”

“I
have dreamed of having my first No. 1 since I was a little girl,” adds
Ell. “It honestly feels surreal, and to be able to celebrate it during
CMA Awards week in Nashville makes it even more special. I’m honored
Brantley, Scott Borchetta and Jon Loba asked me to be a part of this
song. From the minute I heard ‘What Happens in a Small Town’ for the
first time I knew it was a hit that would connect with people, and now
it’s changing my life as an artist. I’m beyond grateful.”

Billboard adds, “‘Friday night bleachers, Sunday pews’ no
longer feel sacred, as everyone around you feels the strangeness of your
solo presence,” continuing “‘What Happens in a Small Town’ paints the
right picture — a small isolated city filled with memories of the one
you used to be with and feelings that never changed.”

Gilbert wrote “What Happens In A Small Town” with Rhett Akins, Brock
Berryhill and Josh Dunne and marks his fifth No. 1, following “Country
Must Be Country Wide,” “You Don’t Know Her Like I Do,” “Bottoms Up” and
“One Hell of an Amen.”

“What Happens In A Small Town” is up for CMA’s Musical Event of the Year at Wednesday’s awards, on ABC.

With back-to-back platinum albums and a grassroots following millions
strong, Brantley Gilbert has clearly struck a nerve. The Georgia native
who started as the defiant life-of-the-party can still go ‘til sunrise,
but he’s also emerged as something far greater: the leader of a massive
tribe of hard-working, fun-loving believers for whom electric
guitar-shredding, rapping, and twang can go hand-in-hand-in-hand. They
call themselves the BG Nation, and when the BG Nation watches Gilbert on
a stage, they don’t just see a star. They see themselves. Seven No. 1
hits punctuate his career: “Country Must be Country Wide,” “You Don’t
Know Her Like I Do,” CMA Awards Song of the Year nominee “Dirt Road
Anthem,” “My Kinda Party,” “Bottoms Up,” “One Hell of an Amen” and
collaboration with Lindsay Ell “What Happens In A Small Town.” Gilbert’s
landmark record Just As I Am clinched the 2014 American Music Award for Favorite Country Album. Earning praise from the New York Times, NPR, American Songwriter,
and more, Gilbert has mined a rich vein of conflict between the party
and the pew on all of his albums. Instead of toiling in limbo, unable to
enjoy good times for fear of Judgment Day, Gilbert fully lives––rowdy
friend, man of faith, devoted husband, smitten new father––just as he
is. Highly anticipated Fire & Brimstone, out now (10/4/19)
via The Valory Music Co., is Gilbert’s most mature and complex
exploration of his world to date. Gilbert embarks on his Fire’t Up Tour 2020 on January 23 in London, Canada with special guests Chase Rice, Dylan Scott and Brandon Lay. For additional information, visit BrantleyGilbert.com or follow him on Instagram and Twitter at @BrantleyGilbert and on Facebook @BrantleyGilbertMusic.

Lauded as “one of the most exciting and talented young artists in country music” (Forbes),
Lindsay Ell is a triple threat:  accomplished musician, unique vocalist
and songwriter. The Calgary native learned to play guitar while
traveling with her father to country-bluegrass camps as a young girl.
Ell honed her craft as a musical stylist and songwriter after being
discovered by BTO and The Guess Who’s Randy Bachman (“American Woman” /
“Taking Care of Business”) who discovered her at the age of 13. The
multi-instrumentalist was soon touring alongside the likes of Luke
Bryan, Buddy Guy, and Keith Urban, as well as wowing audiences as Carrie
Underwood’s guitar player live on the “50th Annual CMA Awards” and
holding her own alongside icon Melissa Etheridge on Skyville Live. In
the last year alone, the 2019 ACM New Female Artist of the Year nominee
and CMT Awards nominee exhilarated audiences as part of Brad Paisley’s
Weekend Warrior World Tour, Sugarland’s Still The Same Tour and Keith
Urban’s Graffiti U World Tour. Ell’s first full-length album The Project debuted at No. 1 on the Country Album Sales Chart and was named Billboard’s
“Best Country Album of 2017.” Her single “Criminal” was the Most Added
song at Country radio upon impact and became her first-ever Top 20 hit
in the U.S., in addition to becoming her first No. 1 single on the
Canadian Country Radio Charts. “What Happens In a Small Town,” Lindsay’s
duet with Brantley Gilbert, has claimed the top spot on Country radio,
marking her first No. 1 in the US. For more information visit: www.LindsayEll.com.