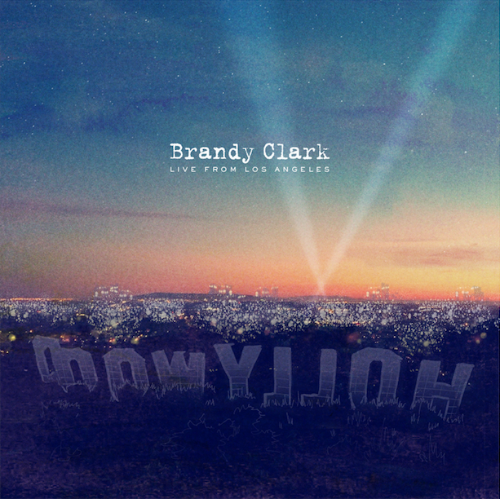 Nashville, Tenn. – After critically-acclaimed country recording artist Brandy Clark hit Los Angeles’ renowned Hotel Café last year, Randy Lewis of the Los Angeles Times
proclaimed that she “by and large is handling her transformation from
behind-the-scenes songwriter to woman in the spotlight pretty
effortlessly.” Clark went on later that summer to a smashingly
successful release of her sophomore album, Big Day In A Small Town, which garnered her two GRAMMY nominations and topped “Best Of” lists from critics such as NPR, Rolling Stone, Billboard, Entertainment Weekly, and more. Now, Clark is releasing her iconic Hotel Café performance with her first ever live album, Live From Los Angeles, which Lewis calls “smart to the core.” Live From Los Angeles is available now at digital retailers.

Lewis shared after an exclusive interview
with Clark, “Between Clark’s consistently smart lyrics, her ever
twisting and turning melodies and (guitarist Miles) Aubrey’s tasty
guitar fills and solos, there’s never a dull moment in the new 11-track
album.”

Clark released an exclusive limited-run of Live From Los Angeles vinyl albums in April in honor of Record Store Day and earlier this summer, released an outtake from her Big Day In A Small Town sessions; instant crowd-favorite “You’re Drunk” that Rolling Stone praised as a “reggae-tinged,” “hilariously hopped-up” track with a “saucy storyline.”

Dubbed by Garden & Gun as “the best songwriter in
Nashville,” Clark has established herself as one of country music’s
greatest storytellers. Last year marked several successful acoustic
tours and the release of Big Day in a Small Town, which was produced by Jay Joyce and has been revered as “gritty and visceral” (Associated Press), “aggressive and big-grinned” (SPIN) and also “made her one of country’s driving forces” (TIME). Rolling Stone
praised, “it’s music tooled alternately for stadiums and songwriting
circles, commercial and public radio, line-dance bars and coffee
shops…Clark is good at bending country boilerplate.”

Big Day in a Small Town is self-proclaimed “cousin” to Clark’s critically acclaimed debut album, 12 Stories, which was featured on “Best of” lists from New York Magazine, NPR, Rolling Stone, The New Yorker, New York Post and The Boston Globe in 2013. That same year, Los Angeles Times called it “the country debut of the year.”

The Morton, Washington-native received her first of six career GRAMMY
nominations in 2013 in the Best Country Song category for co-writing the
Miranda Lambert No. 1 hit “Mama’s Broken Heart.” Her talent as a
storyteller had quickly propelled her into critical acclaim as one of
Nashville’s best tunesmiths when she quietly released her debut album 12 Stories, which went on to be named “best album of 2013” by The Boston Globe, New York Magazine, NPR, The New York Post,
and more. She won the 2014 CMA Song of the Year Award for “Follow Your
Arrow,” which she co-wrote with Shane McAnally and Kacey Musgraves, and
was also named the 2014 Music Row Breakthrough Artist of the
Year. The Academy of Country Music voters nominated her for Female
Vocalist of the Year in 2015. Brandy released her sophomore album Big Day In A Small Town
in June of 2016, which garnered two GRAMMY nominations for Best Country
Album and Best Country Solo Performance (“Love Can Go To Hell”) and
topped more than ten major critics’ “Best of 2016” lists including NPR, Rolling Stone, Entertainment Weekly and Billboard, establishing Clark as one of country music’s most talented artists, beloved by fans, critics, and fellow entertainers alike.