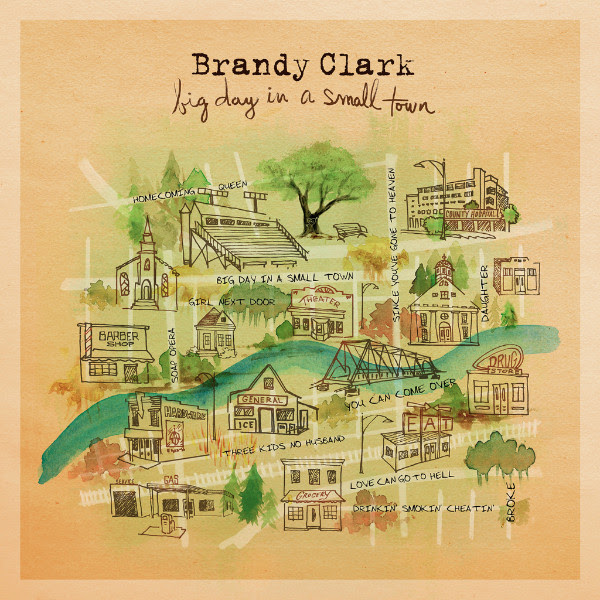 New Single, “Love Can Go To Hell” Top 5 Most Added at Country Radio

NASHVILLE, Tenn./LOS ANGELES, Calif./BIRMINGHAM, England (Monday, Sept. 19, 2016) – “I wanted [Big Day In A Small Town] to feel like it was Any Small Town, USA,” Brandy Clark says
of her sophomore album that came out in mid-June, “but to be general, I
think first you have to be specific,” she shared with Charles Monroe-Kane from a studio in Nashville on this week’s NPR’s To The Best of Our Knowledge when
discussing the influence her hometown played in the process of writing
for this record. With a series of C2C U.K. tour stops underway following
last week’s sold out Hotel Café show in Los Angeles and a taping for
the Audience Network to air this fall, it’s clear Clark’s specificities
are doing just what she hoped—relating.

In fact, earlier this year The Tennessean’s Cindy Watts referred
to her as “a singer who can relate” in a cover story reminding readers
of Clark’s humble beginnings upon moving from the 900-person town of
Morton, Wash. “Brandy Clark was lured to Music City by hooky songs,
recognizable names and dreams of fame. Today, she’s one of country
music’s leading women, lending a thoughtful, articulate voice to small
town life.” The Wall Street Journal’s Barry Mazor opined,
“she’s a major country songwriter, consistently able to devise narrative
portraits of down-home people (many of those stories haunting, some
plain funny), and to furnish them with precise images and metaphors that
stick. She’s also proved to be a winning singer with an unadorned and
touching vocal style…”

Her new single, “Love Can Go To Hell,” dubbed “a wistful break-up
treatise … which nails the sadness and anger of the post-love life
over a pretty bed of layered acoustic instruments and a chugging groove”
(Rolling Stone), is a prime example of her depictive writing on Big Day and was top 5 most-added at Country radio.

Of her voice, well, Clark’s just happy to hear others joining it on
tour. “I’m never happier than when I hear the crowd singing along to the
words I’ve written/to the songs I’m singing,” shares the
singer/songwriter. To have opportunities to really connect with shows
like last week at Hotel Cafe in Los Angeles/tomorrow in Birmingham,
England or when performing for fans on television, Clark adds, “I’ve
gotten to see, hear and discover a lot of great music through series
like those on the Audience Network or shows like last week where a
friend would let me tag along, and I try to go into those shows asking
myself, ‘what would the younger version of me — the one hoping for a
chance, dreaming of an opportunity to pursue my passion for music want
to hear/see?’ And I think as long as people will show up, tune in, or
listen to my songs, I’ll show up anywhere I’m wanted!”

ABOUT BRANDY CLARK
The Morton, Washington-native received her first of four career GRAMMY
nominations in 2013 in the Best Country Song category for co-writing the
Miranda Lambert No. 1 hit “Mama’s Broken Heart.” She won the 2014 CMA
Song of the Year Award for “Follow Your Arrow,” which she co-wrote with
Shane McAnally and Kacey Musgraves, and was also named the 2014 Music Row Breakthrough Artist of the Year. The Academy of Country Music voters nominated her for Female Vocalist of the Year in 2015.