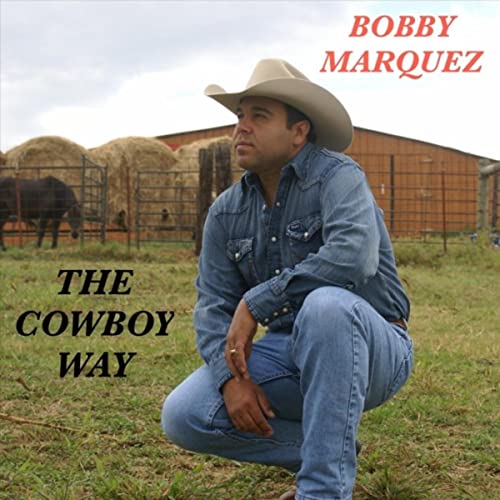 Bobby Marquez has a charismatic smile and refreshing tongue-in-cheek, but heartfelt, honky-tonk style that stirs an energy with audiences worldwide. The Texas-born singer/songwriter is reaching crowds far and wide on radio, national television appearances and tours across the U.S., Australia and Ireland, earning several awards from such notable organizations as the Grammys, The CMA of Texas, the Academy of Western Artists and induction into The Wheeling Jamboree. That musical path began in the small South Texas town of Freer, where Bobby taught himself to play guitar on an old guitar his cousin found too frustrating to learn and threw in the trash. Bobby’s treasure led the way for him to perform at church, pageants and dancehalls before hitting large concert stages throughout his home state, including his hometown Rattlesnake Roundup. Onward to Nashville with the encouragement of record executives, where he got his nickname Smilin’ Bob from WSM Grand Ole Opry announcer Keith Bilbrey who noted that he was always smiling. Well, Marquez has plenty to smile about with songs charted on The Music Row Chart, several overseas charts and proudly in the top ten on The Texas Music Chart. Marquez remains humble and extremely grateful for all of the accolades, including several awards for his music from the AWA and CMA of Texas, but a few are especially dear to his heart. The award-winning song, “The Cowboy Way” is a tribute to his late father-in-law and his integrity, produced by the legendary Western Music Hall of Fame star Rex Allen Jr. The song also went on to become the theme song for the annual Gene Autry festival, The Cowboy Way Jubilee. Another track from the album by the same title, co-written by Bobby Marquez not only won AWA and CMA of Texas awards, it was up for a Grammy nomination. The song titled, For Awhile is a heartfelt duet with the Queen of Bluegrass, Rhonda Vincent. And “Speak Love” is the final track from that collection that sums up Bobby Marquez’s character of kindness and generosity, garnering a CMA of Texas trophy and global attention. The beautiful song was written by Marquez and hit songwriter Karen Staley. His love for music and people is evident in the light of his eye on stage. But just as important is the work he does behind the scenes, his songwriting. Marquez’s songs have been recorded by Alan Jackson, Ty Herndon, George Strait, Rhonda Vincent and Johnny Rodriguez. Bobby Marquez has been seen on national television shows, Larry’s Country Diner, The Penny Gilley Show, Better Nashville, Cheyenne Country, Studio 23 Nashville and Country Fix. Marquez has also been a regular host on the legendary Ernest Tubb Midnite Jamboree. Most recently he appeared on Branson Country USA.  Bobby has shared the stage with The Bellamy Brother, Dennis Quaid, Mickey Gilley, Ray Price, Mel Tillis, Johnny Rodriguez, Martina McBride, David Ball, Janie Fricke, Johnny Lee and Lonestar… just to name a few.  Bobby is also the host and founder of the annual St. Jude Children’s Hospital benefit, Country With Heart, as well as his virtual songwriters showcase, Country Campfire Pickin’.