BOBBY BONES AND THE RAGING IDIOTS AT THE GRAND OLE OPRY 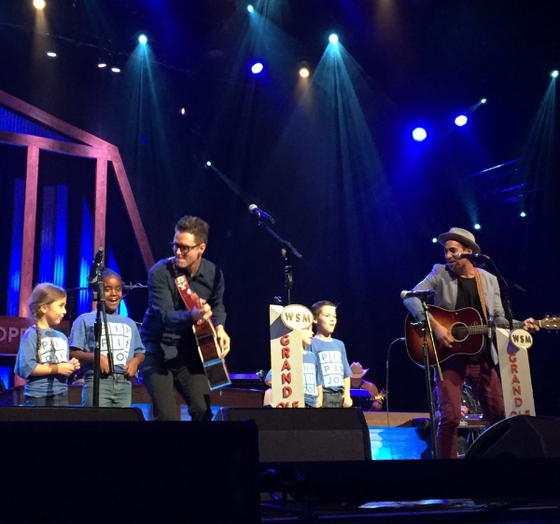 Nashville, TN – Oct. 5, 2016 – In the spirit of Bobby Bones And The Raging Idiots’ first full-length children’s album, THE RAGING KIDIOTS: KIDDY UP!
available now, the comedy duo invited kids to join them up on stage at
The Grand Ole Opry last night, during their performance of fan-favorite
“When I Grow Up,” taken from the album. The special guests brought a
refreshing twist to the night, that also saw the group comprised of
Bobby Bones and Producer Eddie from iHeartMedia’s The Bobby Bones Show,
continue to bring the laughs with a humorous rendition of “If I Was Your
Boyfriend” taken from their No. One comedy album THE CRITICS GIVE IT 5
STARS.

Bobby Bones, who was heralded by New York Times as “the biggest thing in
country radio,” has proven to be one of the genre’s most influential
tastemakers, breaking some of country music’s freshest talent. The host
of iHeartMedia’s The Bobby Bones Show, the show reaches millions of
listeners on nearly 100 stations. Bobby Bones’ BARES BONES: I’M NOT
LONELY IF YOU’RE READING THIS BOOK (Dey Street Books) spent four weeks
on New York Times Bestsellers List following an overwhelming debut that
saw the memoir claim the No. One spot on multiple lists including USA
Today and Wall Street Journal. The release of his memoir came hot on the
heels of Bobby Bones and The Raging Idiots’ No. One debut EP THE RAGING
IDIOTS PRESENTS – THE RAGING KIDIOTS, as well as their No. One comedy
album THE CRITICS GIVE IT 5 STARS. Fans can catch the Black River
artists at upcoming shows in Fort Smith, AR (10/7) and Dallas, TX
(10/9). Bobby’s one-man comedy show, Bobby Bones: Funny And Alone, also
continues to sell out venues with the next stop in St. Louis, MO (10/15)
for two shows on the same night, with the first one having already
sold-out.