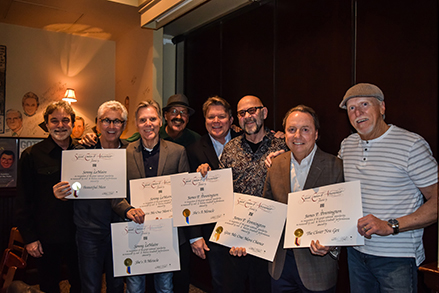 NASHVILLE, Tenn. (March 6, 2018) – BMI executives Jody Williams and David Preston  presented seven ‘Million-Air Awards’ to Sonny LeMaire and J.P. Pennington of Exile,
in recognition of the success of major songs penned by the two writers
and long-time band members. The awards totaled 11 million broadcast
performances (radio spins) between four songs; “The Closer You Get,”
“She’s A Miracle,” “Give Me One More Chance,” and “Beautiful Mess.”

A Million-Air Award is given to songwriters, composers, and publishers
whose songs accumulate over one million U.S. broadcast performances. The
acknowledgement is a mark of praise.

The songs recognized were:

The Closer You Get performed by Alabama –  4 Million Broadcast Performances

Crossover hit-making band, Exile, is celebrating a distinguished career
of 55 years as the longest running American self-contained band and has
sold over 8 million records, including three Gold records and eleven
number one hit songs, along with numerous hits on the pop and country
charts. They are known for major hits including “Kiss You All Over,”
“Give Me One More Chance,” and “I Don’t Want to Be a Memory,” to name a
few. Exile music is available on all digital platforms here.

Exile formed in 1963 looking to play small clubs in
Richmond, Kentucky, but managed to top both the pop and country charts
during their over 55 year-long career. Their most successful hit, “Kiss
You All Over” spent four weeks at the top of Billboard’s pop chart in
1978. In the early 1980’s Exile started to focus on country music.
During their run on the country charts Exile has successfully had ten
No. 1 singles including “I Don’t Want To Be A Memory” and “Give Me One
More Chance.” They have toured with acts including Aerosmith, Fleetwood
Mac, The Oak Ridge Boys, Kenny Rogers and The Judds. The 5 original
Exile members re-formed in 2008 and continue to tour today. Current
members of the band include J.P. Pennington, Les Taylor, Sonny LeMaire,
Marlon Hargis and Steve Goetzman. 2018 celebrates 55 years for the band
and 40th anniversary of the hit song “Kiss You All Over.” For more
information, visit www.exile.biz.