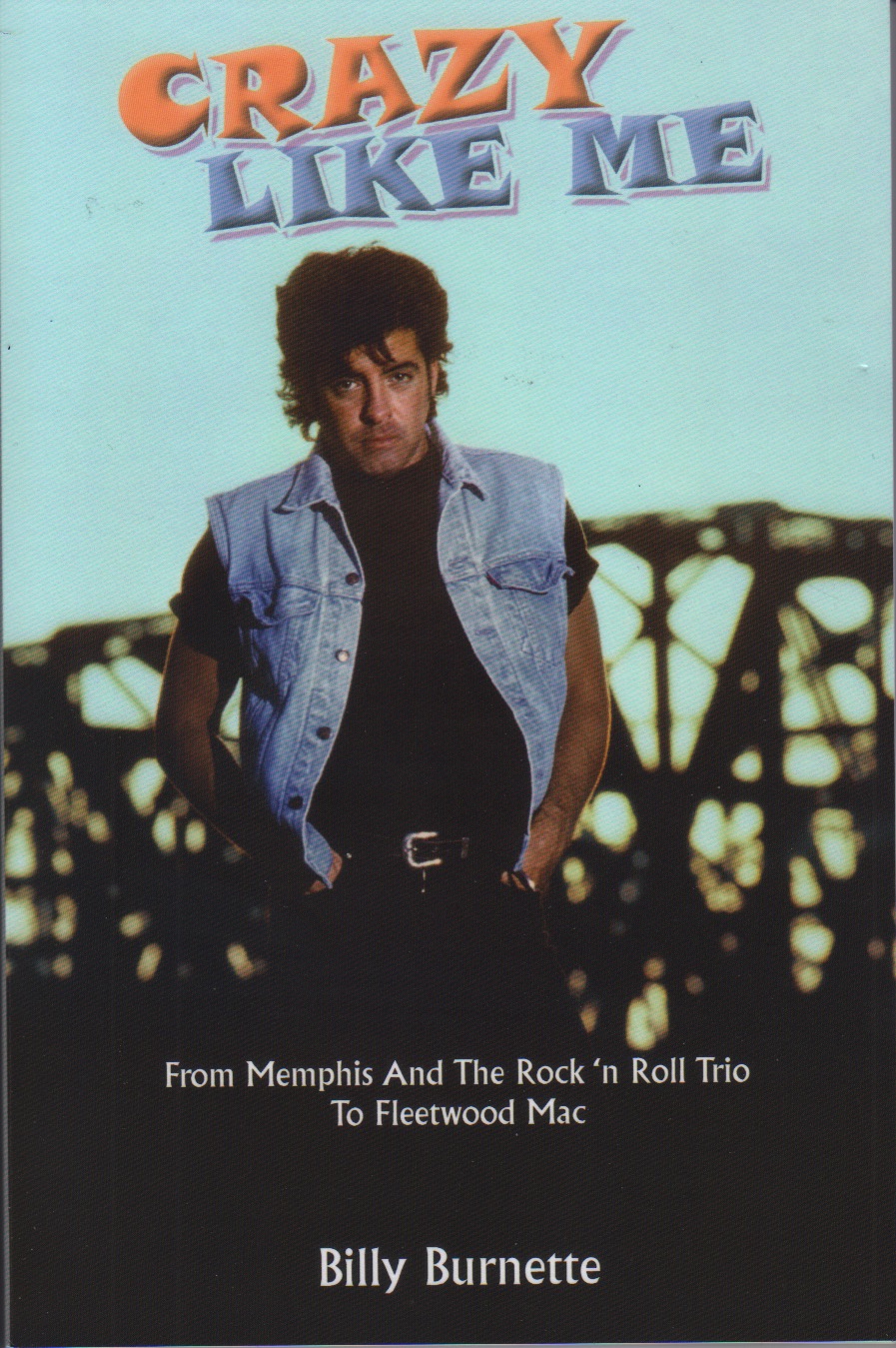 Billy Burnette is ‘Crazy Like Me.’ It’s in his DNA

Billy Burnette is ‘Crazy Like Me.’ It’s
in his DNA

Billy Burnette was literally born into the
world of rock n’ roll and has lived in and around it ever since.  Now he has written a book filled with his
personal memories of those times, and has released a full-length CD to
complement the book.

Titled ‘Crazy Like Me: From Memphis and the
Rock n’ Roll Trio to Fleetwood Mac,’ the story begins with Billy growing up in
a house filled with music. Billy’s father and uncle, Dorsey and Johnny
Burnette, comprised two-thirds of the Rock n’ Roll Trio and are widely
recognized as being among the very first rockabilly acts, starting out in the
early fifties. 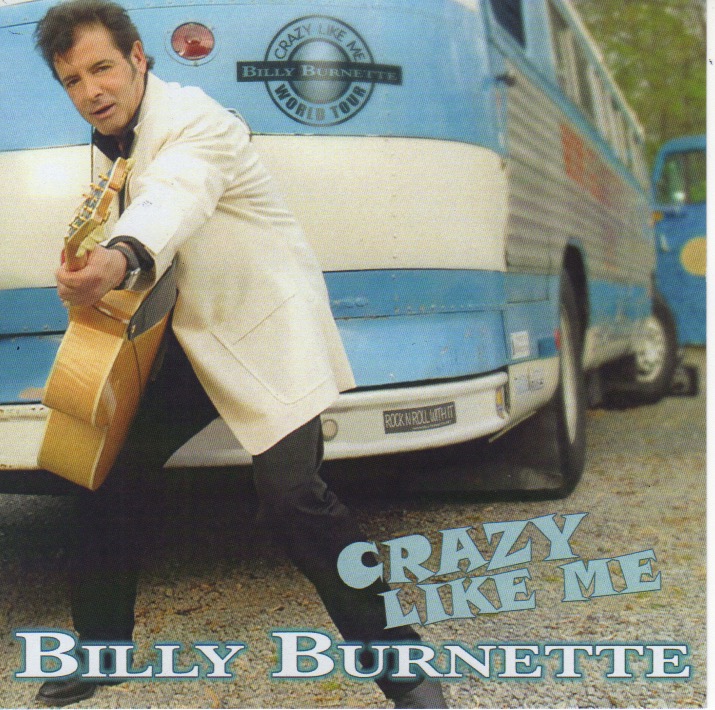 I asked Billy about growing up in a family
that was part of the entertainment industry When did it strike him that this
wasn’t the way every kid grows up?

“You know,” said Billy, “I thought –
because I got into it so young – like I performed with the Rock n’ Roll trio at
three and a half and did my first major record deal in 1960 when I was seven
for Dot Records, so I thought everybody did this. I thought it was just a
normal thing.”

By the time Billy was twelve, he was
touring the Far East, opening for Brenda Lee and entertaining U.S. troops
posted overseas.

The Rock n’ Roll Trio (sometimes
incorrectly billed by their manager as Johnny Burnette and the Rock n’ Roll
Trio) started out in Memphis, where a scrawny kid named Elvis Presley would
hang out to watch them play at the Lauderdale Courts 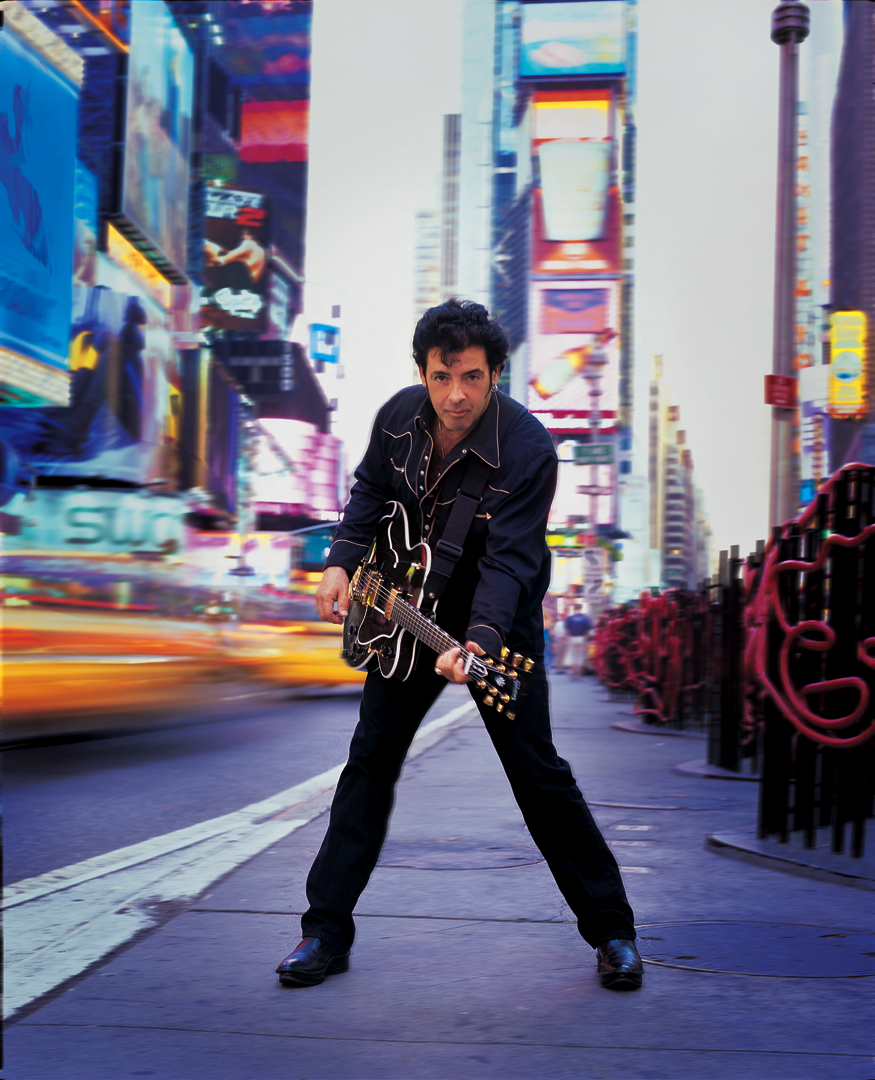 I wondered if one of Billy’s motivations to
write the book was to set the record straight so that the Rock n’ Roll Trio got
the recognition they deserved.

“They actually influenced so many people,”
said Billy, “beginning with Elvis Presley who used to hang out at their
rehearsals at the Lauderdale Courts.  In
fact, while I was doing the book, I found a picture of Elvis and my dad at a
Boys’ Club in 1954 so he was hanging around them.  They started their band about the time I was
born in 1953 and wrote the song ‘Rockabilly Boogie’ which is about my cousin
Rocky and myself.

“But they were, I think, the first rock n’
roll band out of Memphis. They influenced Elvis because he was always hanging
around.  My mom knew him well and grew up
with him. [Lauderdale Courts] was a project for the poor after the War, so
that’s where everybody lived and my mom said it was a fun place because they
had basketball courts there and it was nice, actually.  When I went back to interview my mom –
because someone was going to do a documentary on them [the Rock n’ Roll Trio]
and I interviewed her myself for it and to get some information for my book and
I didn’t realize how nice it actually was, still to this day.”

Billy’s musical journey reads like a
history of rock n’ roll, told from a very personal point of view.  Unlike many books about music, Billy was
actually there, and the book is filled with his accounts of meeting, working
with – and quite often ‘partying’ with – a who’s who of popular music. Glen
Campbell, George Harrison, Delaney and Bonnie, Roger Miller, John Fogerty,
Jerry Lee Lewis, Little Richard, Paul McCartney… even Charlie Manson and many
more.  Billy’s memories of these and
other iconic characters have never been told before.  All are told from the point of view of
someone who was a participant in the story. 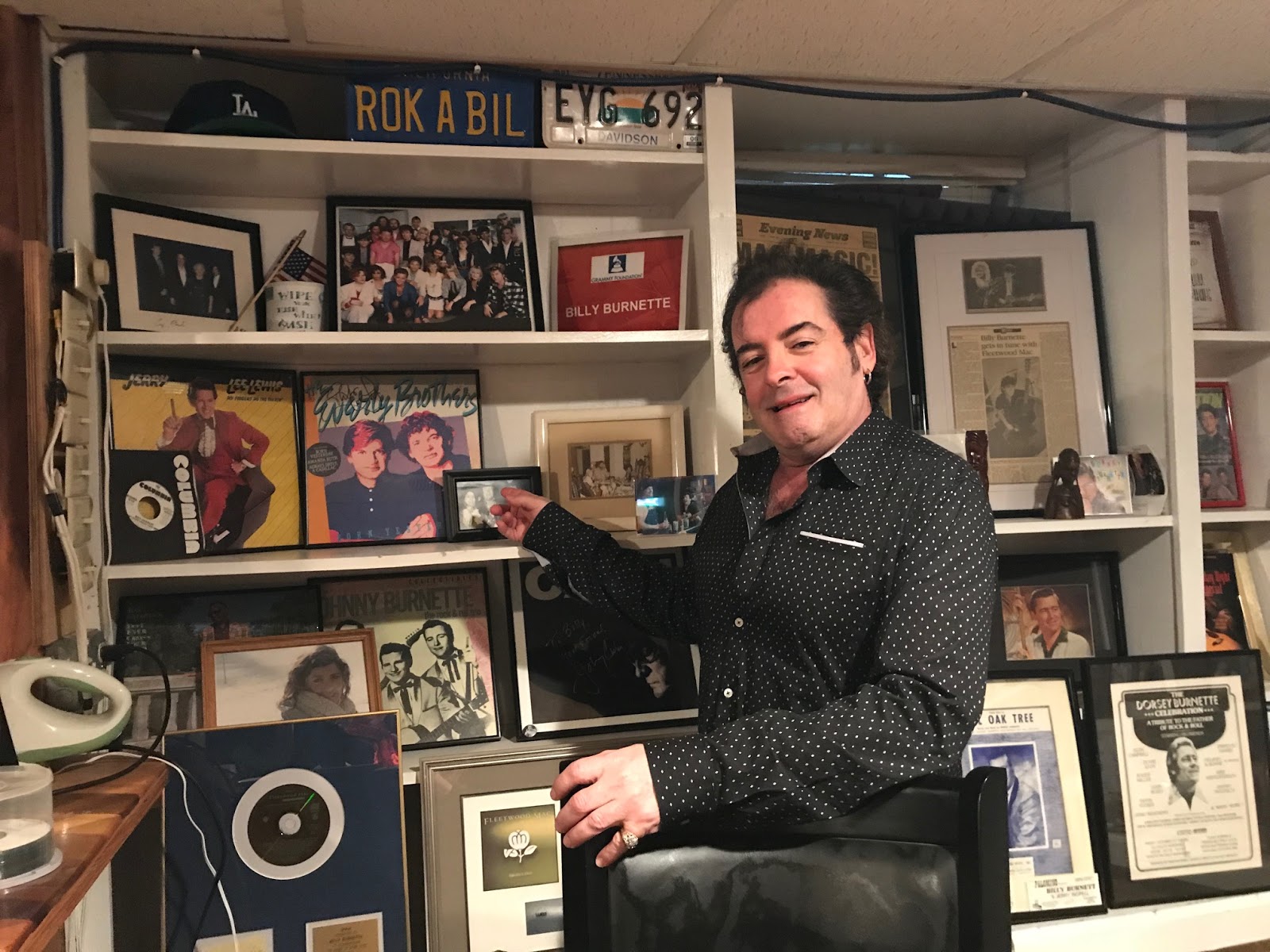 Billy joined Fleetwood Mac after Lindsey
Buckingham quit the band at short notice. I asked Billy to think back to the
day he got the call to join the band.

“I was in the studio with Roy Orbison, and
I realized Mick [Fleetwood] was looking for me,” he recalled.  “I had known him for five or six years. This
was 1987. I called home and I was told, ‘Mick’s looking everywhere for you,’ so
I called Mick. He said, ‘I need you to join the band.’ I said, ‘When?’ and he
said, ‘Tomorrow morning.’ I was with MCA Curb, so I had to call Mike Curb to
get out of my deal there, and he let me out. The first half hour was him trying
to talk me into staying, because I’d just been nominated for the ACM’s Best New
Male Vocalist, and things were going good for me but not as good as going on a
major Fleetwood Mac tour.  That was like
the circus taking off that day. There were I don’t know how many trucks and trailers,
We had our own private 727.”

I asked Billy how he handled the high notes
that Lindsey was well-known for, but were at the limit of Billy’s vocal range.

“I just made that happen,” said Billy.  “I just, in my head, practiced and practiced.
It’s a muscle so I realized after that if you practice hitting it and you
practice every day, you can do it. I mean, I just made myself. I said, ‘Come
on, you’ve got no choice you’ve gotta do this!’ Eventually after a year went
by, one of the girls one night was sick; either Christine or Stevie, or not
sick but not singing up to snuff that night, so they’d actually wanted to
cancel. I said, ‘why don’t we bring down everything to E Flat’, which is a
half-step down. We brought it down and everybody said, ‘Man, this feels really
good. Let’s stay here.’”

Billy is brutally honest and makes no
effort to ‘whitewash’ events that enveloped him and those around him who were
caught up in the whirlwind of the music industry.  Pills, dope and alcohol were a part of the
music scene and he does not shy away from detailing how they affected him and
those around him.

The album, simply titled ‘Crazy Like Me,’
stands alone as a musical work, but listened to in context with the book, takes
on a greater significance. It opens with ‘Tear It Up,’ a rockabilly classic
written by Billy’s dad Dorsey Burnette (but credited in copyright to the three
members of the Rock n’ Roll Trio).
Billy’s version captures the pounding excitement that had audiences
going nuts when the Trio performed it in their live shows.

I asked Billy what it was like, going into
a studio and cutting his version of the song after all these years.

“You know, I’ve done that song two or three
times now,” noted Billy.  “I did it with
Mick Fleetwood’s Zoo and I did it on my Columbia record back in 1980, but this
record here is like some things that coincide with the book. That’s why I did
this album with things like ‘Do I Ever Cross Your Mind’ that Ray Charles and
Bonnie Raitt did and it won a lot of Grammys. I just went back and did that.
But with ‘Tear It Up,’ we used to close the show with that song with Fleetwood
Mac, as one of our encores. Rod Stewart did it on his album, ‘Tonight’s The
Night.’ The song’s done very well. It’s got some legs of its own.”

The album includes a number of songs that
have played a role in Billy’s music career.
Billy has been a prolific songwriter. ‘River of Love,’ co-written by
Billy, was George Strait’s 57th number one single, and Billy’s own
version is included here, as is ‘(All I Can Do Is) Dream You’ that Billy wrote
for Roy Orbison.

Billy adds his personal touch to ‘It’s
Late,’ a song written by Dorsey Burnette that became an international hit for teen
idol Ricky Nelson.  (According to Billy’s
book, the song helped Dorsey buy his first Cadillac!)

Billy devoted ten years of his life to
touring as part of the iconic band, Fleetwood Mac.  As a nod to those years, the album includes
Billy’s version of ‘Oh Well,’ the Fleetwood Mac hit written by Peter Green, a
founding member of the band. But Billy puts a very personal twist on his
treatment of the song for the new album.

“We were just messing around with it one
day,” Billy recalled. “Dave Roe is the bass player who usually plays with me. I
said, ‘Let’s take a little bass solo after this.’ He does just that.  I kinda needed for it to be different. We’d
actually cut it for the first time on a live album that I did up in New York
for the Chesky Brothers that was direct to tape, no overdubs or whatever. And I
used to do it every night with Fleetwood Mac.
That was one that I was designated to do with them. And I’d been doing
it years previous with our band, Zoo.”

Other standout tracks on the album include
a suitably raucous ‘She’s Burning the Honky Tonk Down’ and the title track,
‘Crazy Like Me,’ but there’s not a dud on the project. As Billy said, “Rock n/
Roll is part of my DNA.”  In his case,
looking at his pedigree, it is literally true.

Unlike most books about the rock n’ roll
era, ‘Crazy Like Me’ doesn’t try to analyze the phenomenon.  Rather it reads like a private conversation
with Billy as he recounts amazing episodes that shaped his life and changed
music forever.   Dive in anywhere and
you’re hooked.  Even better: read it
while listening to the music on the ‘Crazy Like Me’ album. Immerse yourself in
a world of rock n’ roll.

I asked Billy, if he could sum up his life
in one word, what would it be?

Both the book and CD are available at
Amazon and wherever books and music are sold. More at www.billyburnette.net and on Facebook
@billyburnetterockabilly

Billy Burnette in his home studio, looking
over some of his many pieces of memorabilia. Photo credit: Preshias Harris