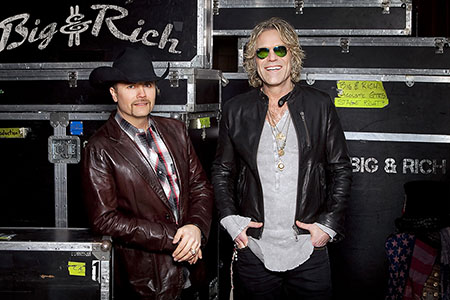 NASHVILLE, Tenn. (January 26, 2017) – Westwood One Sports, the official network radio partner for the National Football League, will present comprehensive coverage of Super Bowl LI, live from NRG Stadium in Houston, Texas, on Sunday, February 5, 2017. The network will feature a full schedule of game day programming leading up to kickoff, when the NFC-Champion Atlanta Falcons take on AFC-Champion New England Patriots for the title. This is the 30th consecutive year and the 44th time overall Westwood One has broadcast the Super Bowl, America’s biggest sporting event.

Country’s multi-platinum, superstar act Big & Rich, comprised of Big Kenny and NBC’s “The Celebrity Apprentice” winner John Rich, will kick off Super Sunday on Westwood One with an exclusive remixed version of their hit song “Party Like Cowboyz.”
The customized opening theme will be mixed with highlights and sound
bites from the two participating teams in their quest for the Vince
Lombardi Trophy.

Big & Rich have garnered multiple Grammy, ACM, CMA and CMT Music
Award nominations. Three singles from their latest album Gravity
– “Look at You,” “Run Away with You,” and “Lovin’ Lately” – scored top
10 on the Country charts. The superstars’ first studio album, Horse of a Different Color, includes their hit infectious single, “Save a Horse (Ride a Cowboy).”

“Nearly half of NFL fans are Country music fans and we’re thrilled to
have Big & Rich as part of our Super Bowl broadcast,” said Suzanne
Grimes, Westwood One’s President and EVP, Corporate Marketing for
Cumulus Media. “Our incomparable game day content offers Country music
fans a real treat but also provides a superior, multi-platform
experience for our NFL listeners and exceptional opportunities for our
advertisers. I can’t wait to get the party started!”

This is Harlan’s seventh Super Bowl with the network. It also marks
Esiason’s 17th as the radio analyst, surpassing Hall of Fame Coach Hank
Stram for the most in NFL history.

Scott Graham kicks off Westwood One’s extended pregame coverage with Super Bowl Preview at 2:00 pm ET. Additionally, Super Bowl XXXI winning Coach Mike Holmgren and Super Bowl XXXIV MVP Kurt Warner will
contribute to Westwood One’s coverage throughout the day. Warner is
also a finalist for the Pro Football Hall of Fame Class of 2017, to be
announced the night before the Super Bowl.

In addition to the Super Bowl LI game broadcast, Westwood One
presents a full slate of pregame programming, starting at 2:00 pm ET on
Game Day—

Westwood One will also produce “Seven Days to Sunday—The Road to Super Bowl LI.”
This hour-long preview show will air each night during the week leading
up to Super Sunday, beginning on Monday night, January 30th, and
continuing through Saturday night, February 4th, 2017. Hosted by Scott
Graham, the voice of NFL Films, the
nightly program will feature interviews with players from both
participating teams as well as coaches and other special guests. Each
night’s show will be co-hosted by a different Westwood One NFL analyst
and will also feature a flashback to a previous Super Bowl.

Millions of listeners around the globe will tune in to Westwood One’s
Super Bowl LI coverage across more than 650 radio stations nationwide
and 150+ FM translators. Fans can also hear the broadcast on SiriusXM,
via the TuneIn Radio app, and through NFL Game Pass, which is available on NFL.com and the NFL Mobile from Verizon app.

The broadcast can also be heard worldwide via the American Forces
Radio Network, which provides programming to America’s military forces.
The network serves over one million men and women in uniform, Department
of Defense personnel, American Embassies and Consulates in over 175
countries and territories, as well as on more than 200 U.S. Navy, U.S.
Coast Guard and Military Sealift Command ships at sea.

Howard Deneroff is the Executive Producer of Westwood One Sports.
Larry Costigan and Mike Eaby are the Coordinating Producers.