BIG & RICH TO BE THE BACHELOR 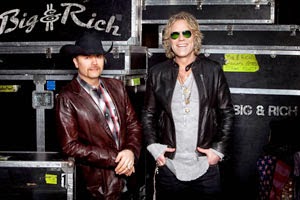 NASHVILLE, Tenn. (February 5, 2014) – Famed country music duo Big & Rich will be featured on an upcoming episode of The Bachelor. The
episode will feature a special group date that tests the bachelorettes’
music skills and concludes with a show-stopping performance by Big and
Rich, all with the newest Bachelor, Chris Soules. The episode is
scheduled to air Monday, February 9, 2015, at 8:00 pm ET on ABC from the
Deadwood Mountain Grand, a Holiday Inn Resort property.

Chris Soules, the handsome and successful new Bachelor who has become
known as “Prince Farming,” introduced himself to last season’s
Bachelorette Andi Dorfman, and female fans fell hard for the soft-spoken
man with a heart of gold. Now, this dreamboat farmer and wealthy
businessman from Iowa is looking to fall in love and find a wife — and
bring her back home to share a life with him in the small Iowa town of
Arlington. With the support of his family and the state of Iowa rooting
for him, Chris truly believes he can find the right woman to share a
life with. Follow Chris Soules’ search for his soul mate in the 19th
edition of The Bachelor on Mondays (8:00–10:01 pm ET) on the ABC Television Network.

ABOUT BIG & RICH
Big & Rich is comprised of Big Kenny and John Rich. The
multi-platinum hit duo have garnered multiple GRAMMY, ACM, CMA and CMT
Music Award nominations and were nominated as the 2014 ACM Vocal Duo of
the Year. The first single, “Look at You,” from their latest studio
album, Gravity broke the Top 10 on the country chart in
November. Their current single, “Run Away with You” is now hitting radio
airwaves. The country superstars’ first studio album, Horse of a Different Color,
includes their infectious hit single, “Save a Horse (Ride a Cowboy).”
Other hits include, “Comin’ to Your City,” “8th of November” and their
No. 1 hit “Lost in this Moment.” Meanwhile, “Comin’ to Your City” is
nearing a decade as the theme song for ESPN’s College GameDay show.

To learn more about Big & Rich go to www.bigandrich.com

ABOUT THE BACHELOR
On ABC’s hit primetime reality series The Bachelor, one
lucky man is offered the chance to find true love. A single and eligible
Bachelor embarks on a romantic journey, getting to know a number of
beautiful women, gradually narrowing the field as he continues his
search for his soul mate. At the end of this romantic voyage, if he has
found the one, will there be a proposal — and will she say yes? Hosted
by Chris Harrison, The Bachelor is produced by Next Entertainment in association with Warner Horizon Television.

The 19th season of The Bachelor airs Mondays 8/7c on ABC. For more information on The Bachelor, visit http://abc.go.com/shows/the-bachelor.