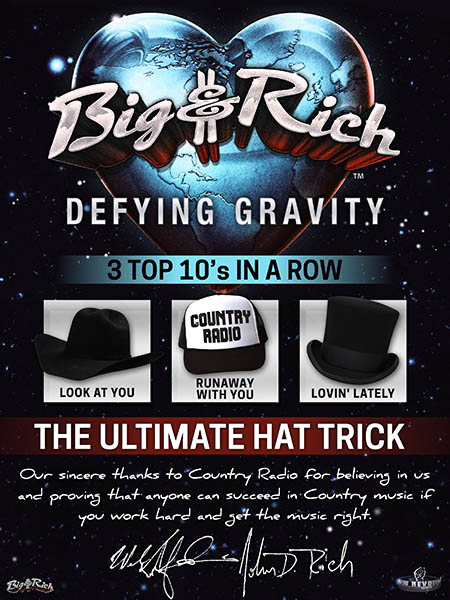 NASHVILLE, Tenn. (October 11, 2016)
– The duo Big & Rich have always marched to the beat of their own
drum, but now it seems that Big Kenny and John Rich are bucking the
musical trends more than ever. With the entry of their latest single,
“Lovin’ Lately,” into the Top 10 this week, the award-winning duo can
claim a “hat trick” of three straight singles in that portion of the
chart in their decade-plus history. But, the story doesn’t end there.

The singles – all from their Gravity album – were released
on the group’s own Big & Rich Records label and promoted by their
own independent promotion team at New Revolution – a rarity in today’s
scene, controlled mainly by the majors. The duo had been part of the
Warner Brothers roster for well over a decade when they decided to
tackle a new way of doing things business-wise. Rich admits it was a
little scary, but it’s paying off quite well.

“It’s terrifying and exciting all at the same time. You take on all
the business and marketing side yourself, but there’s a big team of
people that we have assembled that are helping us do this. But at the
end of the day, our board meeting consists of two guys. If we agree, it
will happen, and if we don’t, it doesn’t.”

The single features a vocal cameo from fellow hit maker Tim McGraw,
who actually gave them the idea for the song. “He told it to us in a
parking lot in Canada, where we were doing a show with him. He said he
had a song title — ‘Who You Been Loving Lately?’ We thought it was
brilliant. We wrote it, recorded it, and emailed it to him. His response
was a video treatment — he wrote an entire video script for the song. I
looked at Kenny and said, ‘I guess he likes it.’ Kenny said,
‘Apparently so, we should ask him if he wants to sing on it.’ He said,
‘Sure! What are you doing next Thursday at 3pm?’ We said, ‘Recording
you, Brother Tim.”

And, the rest, as they say…..is another part of the Big & Rich story! For more information about the duo, visit www.BigandRich.com

About Big & Rich:
Big & Rich is comprised of Big Kenny and NBC’s “The Celebrity
Apprentice” winner John Rich. The multi-platinum hit duo have garnered
multiple Grammy, ACM, CMA and CMT Music Award nominations. The first
single, “Look At You,” from their latest studio album, Gravity,
smashed into the top 10 on the Country chart. The follow-up single,
“Run Away With You,” kept the momentum rolling, also hitting the top 10,
and the latest single, “Lovin’ Lately” featuring Tim McGraw also broke
into the top 10. The Country superstars’ first studio album, Horse of a Different Color,
includes their hit infectious single, “Save a Horse (Ride a Cowboy).”
Other hits include “Comin’ to Your City,” “8th of November” and their
No. 1 hit, “Lost in this Moment.” Meanwhile, “Comin’ to Your City” is
nearing a decade as the theme song for ESPN’s “College GameDay.