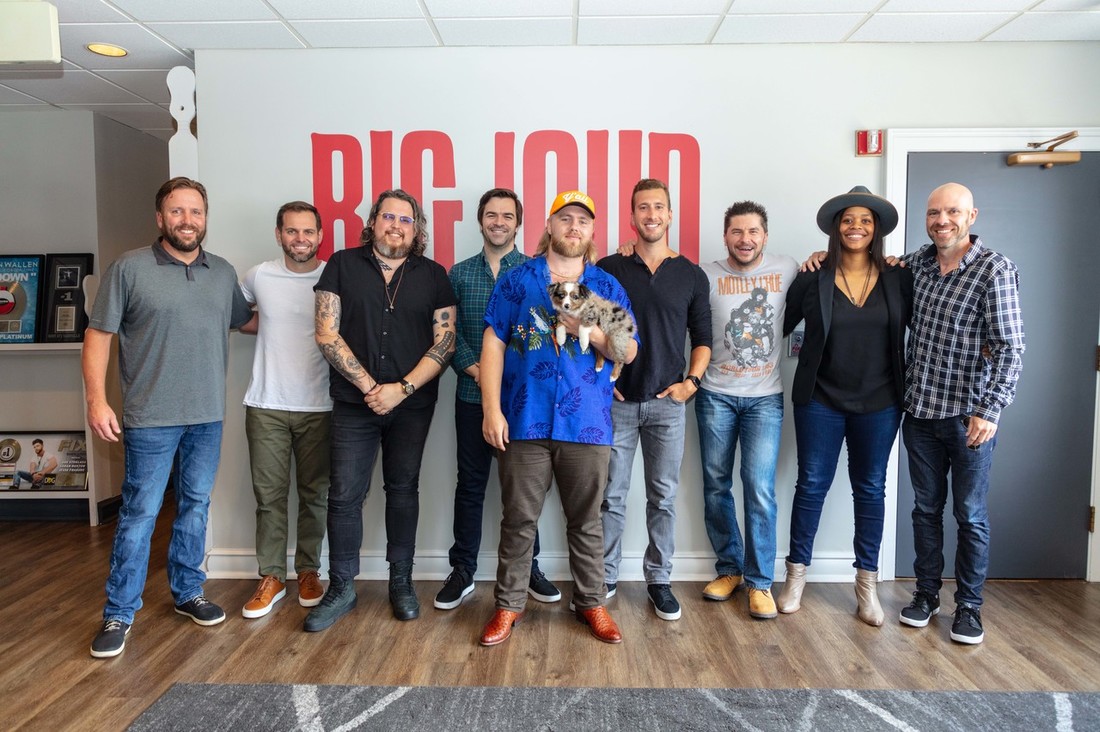 BIG LOUD RECORDS is proud to welcome the latest
addition to its bold-and-getting-bolder roster, signing an artist who
truly defies categorization … a singer/songwriter known simply as ERNEST.

Already revered as a young-but-talented lyricist with an unpredictable
vocal flow, the Tropical Cowboy is cut from a new kind of Country cloth.
Growing up in Nashville, he was inspired by everything from Eminem to
George Strait to Jimmy Buffett, and so far he’s put that mix to use on
cuts by the likes of Jake Owen, Chris Lane and Florida Georgia Line –
who chose “Dig Your Roots” as the title track of their 2016 album. Now
the banjo-playing, confident crooner is ready to make his own mark.

“I’m super blessed to call Big Loud my team. They’re like family to me,
and I wouldn’t want to be anywhere else,” shares ERNEST of the signing.
“We share the same vision, and most importantly, they let me be ME. I’m a
very eccentric person and they encourage me to really dig in to
everything that makes me unique.”

“We are longtime fans of ERNEST and his songwriting. Over the past few
years, we’ve watched him develop his vision and channel his creative
flow,” says Big Loud partner Kevin “Chief” Zaruk. “He’s truly a
one-of-a-kind artist and we cannot wait to introduce the world to ERNEST
and his music.”

In addition to joining the Big Loud Records family, ERNEST will also be
managed by Big Loud, with the company’s Ryan Kroon overseeing day-to-day
responsibilities.

ERNEST will hit the road on two coast-to-coast tours lined up this fall
and winter. First, he’ll join viral superstar Mason Ramsey for HOW’S UR
GIRL & HOW’S UR FAMILY PT. 2, kicking off Wednesday (10/2) in
Athens, GA, up until the November 2 show in Minneapolis, MN. Then the
new talent joins Lane’s BIG, BIG PLANS TOUR November 7 in Morgantown,
WV, with dates running through February 22 in Detroit, MI.

His forthcoming Big Loud Records debut is currently in the works with
producer Joey Moi, but in the meantime, ERNEST is giving Country fans a
taste of what’s to come. Out next Friday (10/4), the tropical
two-stepper “I Think I Love You” is full of sandy longnecks, breezy
guitars and beach-bum charm, while the rangy “Insane” stands out as a
dreamy backroad-R&B confession, and a tender tribute to love that
changes everything.

Adopted at three weeks old and victim to a freak heart attack at 19,
surmounting ridiculous odds has always been ERNEST’s gift. He learned
banjo and guitar before he was a teen but quickly developed a passion
for Hip-Hop and R&B as well, citing Eminem, Ludacris, and George
Strait as some of his earliest influences. Discovering an equally
powerful love of songwriting, ERNEST began working alongside Nashville
songwriting royalty like the Warren Brothers and soon earned cuts from
Florida Georgia Line (“Dig Your Roots”), Chris Lane (“Big, Big Plans”),
LOCASH, Jake Owen, Mason Ramsey, Morgan Wallen and more. Now set to
begin his career as an artist, ERNEST will be unlike anything currently
afloat in Music City. Hitting the road this fall and spending endless
amounts of time in the studio, the Tropical Cowboy is about to show us
his distinct sound when new music drops in the coming weeks.

Founded in 2015 as an expansion of Big Loud to take chances where others
would not, Big Loud Records boasts an instant success story that is
still unfolding. Right out of the gate, the independent firm sent
then-newcomer Chris Lane’s “Fix” to GOLD-certified #1 status (the
label’s first-ever release) and backed it up with two more Top 10 hits.
Today, Big Loud Records continues to punch above its weight, adding big
wins by signing proven star Jake Owen to the roster and returning him to
the top of the radio charts. “I Was Jack (You Were Diane)” became a
GOLD-certified #1 in 2018, and “Down to the Honkytonk” notched another
GOLD-certified Top 10. Big Loud Records has also launched the career of
party-starting phenom Morgan Wallen, who just scored back-to-back #1s on
the Country Radio Airplay charts with the PLATINUM hits “Up Down”
featuring Florida Georgia Line and multi-week chart-topper “Whiskey
Glasses.” The Big Loud Records family also includes lyrically gifted
upstart HARDY, singer-songwriter Madison Kozak, viral sensation Mason
Ramsey, Canadian talent MacKenzie Porter, newcomer Sean Stemaly and
hyper-creative ERNEST, and so far, its roster has accounted for more
than 1.8 BILLION on-demand streams in the US alone, and global totals
topping 2.7 BILLION (Nielsen Music). As of July 2019, Big Loud
Records was the #1 streaming market share holder among true independent
Country labels and #6 overall (country currents YTD, Nielsen Music),
with its reputation for shaking things up extending to staff as well.
Big Loud Records VP/Promotion, Stacy Blythe, was awarded the year’s top
honor for SVP/VP at the 2019 CRS/Country Aircheck Awards.