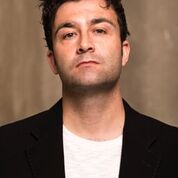 Lamitschka:  Music has many new fans throughout Europe who may be hearing about you for the

Answer: I’m a singer-songwriter in the Americana/folk genre. I’m originally from N.Ireland but now live in Nashville in the US.

Answer: Last year was a great year creatively for me. I spent it writing
and recording my new album Shorebound. The best part of Shorebound is
how it celebrates collaboration, not only with the writing but also with
the recording.

Lamitschka:  Tell us about your upcoming album…

Answer: ‘Shorebound’
refers to one of the themes of the album which is that the characters
in these songs all have a self-awareness, an internal sense of direction
of where they are heading, even in the face of challenges.

Lamitschka:  Do you write the songs yourself? If not, how do you go about finding the songs for

Answer: I wrote two of the songs on my own and then wrote the others with ten of my closest collaborators.

Answer:
Each song is very different from the other but there is an overall
sense that the characters know where they are heading in their journey.

Answer: My
last CD was called The Emigrant and was much more raw and stripped back
sonically. It was a concept album on the search for our place in the
world. ‘Shorebound’ is a full band album and has a much bigger sound.

Lamitschka:  Your current single is being played by radio. What do you feel is special about this

song that makes people want to hear it?

Answer:
People really seem to gravitate to that song for one reason or another.
I think people want to hear it because of how they relate to the
subject matter. Also, the great Kim Richey sings some very sweet
harmonies on that track and who doesn’t like to that?

Answer:
I never want to waste time, energy or space recording anything except
songs that speak my truth. I know that if a song speaks to me it will
speak to others.

Lamitschka:  The album features several duets. How did they come about?

Answer:
It was part of the album’s concept. I wanted to have the co-writer of
each song lend their voice to the recording. This year marks the 10th
year since I recorded my first record and I wanted to include the songs
and voices of people I have worked with over the past 10 years.

Answer:
As much as the muses allow me. I’m lucky that my record label (Proper),
my producer and my cowriters trust me with the creative direction of my
music. I wouldn’t be able to create with my hands behind my back.

Answer:
I played one of my songs at a graveside at the request of a parent who
was burying their child. That was an deeply emotional experience. Being
asked to have your music be a part of something as meaningful as that
was an honor and also something very humbling.

Answer:
I’m inspired by people who came before me, people like Bob Dylan and
Tom Waits who inspired me from an early age but I’m also inspired by my
cowriters and conversations. Inspiration can strike anywhere and
anytime. I like finding it in the most obvious and non-obvious places.

Answer:
I love taking road trips. It is a great way of transplanting me into a
different headspace. I just watched a miniseries on Waco, Texas and that
is on my list to visit. I also love the Mississippi Delta and spending
time down there. I don’t do well sitting still. I prefer relaxing on the
go.