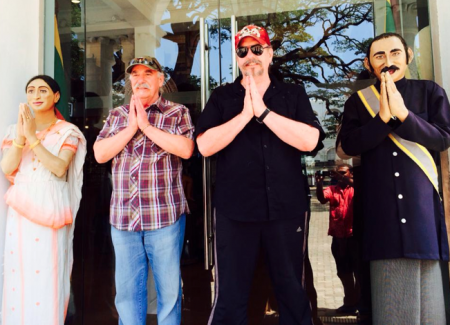 (Photo credit: Judy Seale)
Nashville, Tenn. (February 19, 2014) – Country music’s legendary duo the Bellamy Brothers are
back stateside this week following an extensive tour of India and Sri
Lanka.  Upon arriving in the region, the brothers learned they were
actually making history by becoming the first country music act to tour
in those Asian countries.
“When
we arrived, they told us no other country act had ever toured in these
countries, which came as a bit of a surprise,” notes David Bellamy.
“Collectively, the populations of India and Sri Lanka total about 1.3
billion and we learned that these people are huge fans of our music.  We
sold out every show and there are already other offers on the table for
us to go back and tour again soon.  It was a very rewarding experience
for us.”
Howard Bellamy
adds, “It was rejuvenating to tour two countries that we have never
been to.  It made me think back to the beginning of our career and the
excitement of a new experience.  Nothing gives you a broader outlook on
the rest of the world than touring in countries like India and Sri
Lanka.  The fact that we appealed to a broad demographic in both
countries and that these folks knew all the words to our songs was very
special for us.”
While
touring the region, the Bellamys sold out three shows, performing
before thousands in venues that were filled well beyond their
capacities.
In
addition to their usual 100+ US dates, the duo will continue to tour
internationally throughout the year with stops in Brazil, Australia, New
Caledonia, Switzerland, Germany, Norway, Denmark and Canada.  The
Bellamy Brothers’ international tour dates are booked exclusively by
Judy Seale / JSI International.
The
Bellamys plan to release new music in conjunction with several of the
international tour stops.  Recording plans are already in the works for
collaborations with Brazilian rock star Eduardo Araújo and Swiss rock sensation Gölä.  The brothers’ first album with Gölä (BB&G: The Greatest Hits Sessions – released in 2010) debuted at #1 on the Swiss Music Chart and soon thereafter reached double-platinum sales.
In
addition, the Bellamys are planning for a three-song EP and music video
currently scheduled for a late May / early June release.  The EP and
video will serve as a teaser for the brothers’ 40th anniversary album
which is set for a spring 2015 release.  The two-disc set will feature
15 new songs and 15 #1 hits.

Throughout
their nearly four decade career, the multi-platinum selling Bellamy
Brothers have charted 15 #1 hits on the US country and pop music charts.
Hits like “Let Your Love Flow,” “If I Said You Had A Beautiful Body
(Would You Hold It Against Me),” “Redneck Girl,” and “Old Hippie” helped
to make the brothers household names.  Today, their seamless harmonies
remain perfectly intact as they continue to travel the United States and
European tour circuits, performing over 150 dates each year.