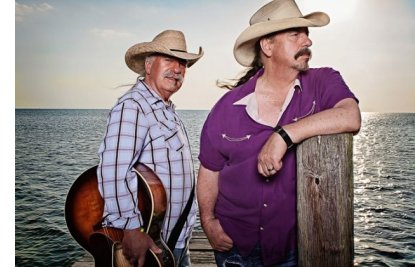 Nashville, Tenn. (July 7, 2014) – The Bellamy Brothers‘ 2014 international tour continues to pay dividends
for the legendary Country duo.  The Bellamys’ 2014 itinerary is shaping
up to be one of the most demanding tour schedules since the group’s
inception nearly 40 years ago.  Today, Howard and David Bellamy announced tour dates in Qatar, Australia and New Caledonia, in addition to upcoming performances in Switzerland, Belgium, France, Norway, Germany and Canada.  In February of this year, the Bellamys made touring history when they became the first Country music artists to tour in Sri Lanka and India, selling out shows in both countries.
“On
the international scene, the Bellamy Brothers are the most demanded
Country music act in the touring industry,” says the brothers’
international talent agent, Jude Seale.
“They are able to sell out shows in India, Sri Lanka, New Caledonia,
Qatar and other nations where other country artists aren’t recognized.”
David
Bellamy adds, “The international tour circuit landed us permanent jet
lag since we started our career almost four decades ago and it seems
like it keeps getting busier every year.  We are thankful for all of the
countries around the world who have supported us, and continue to
support us, over the years.”

The
Bellamys also plan to release new music in conjunction with several
international recording artists. The brothers will travel to Brazil
later this year to record with Brazilian rock star Eduardo Araújo and will also reunite with Swiss rock sensation Gölä for another collaboration, scheduled to be released in September.  The brothers’ first album with Gölä (BB&G: The Greatest Hits Sessions – released in 2010) debuted at #1 on the Swiss Music Chart and soon thereafter reached double-platinum sales.

In addition, the Bellamys have released a three-song EP and music video titled, Boobs / Texas Girls (watch the music video HERE). The
EP and video serve as a teaser for the brothers’ 40th anniversary album
which is set for a spring 2015 release. The two-disc set will feature
17 new songs and 17 of the hits.

Aside
from their international tour, Howard and David Bellamy continue to
travel stateside, performing more than 100 live dates in 2014, including
a July 9 performance at the historic Grand Ole Opry in Nashville, Tennessee.