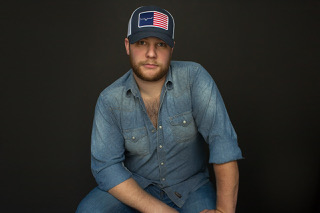 A few decades ago, ‘Outlaw Country’ shook up the country music scene as personified by Waylon, Wille, Kris Kristofferson and David Allan Coe. Now along comes a new ‘bad boy’ of country music: Dakota Poorman who is happy to step outside the boundaries that surround many country artists.

‘New’ isn’t really the word to describe Dakota Poorman who has been earning his chops the hard way: playing gigs in bars and venues throughout the Northwest, surrounding his hometown of Maple Valley, Washington, and fronting the Dakota Poorman Band since 2010. However, he might be a ‘new’ name and a breath of fresh air in Music City.

Cranking up the excitement – and audiences – with what he describes as “Red, White and Blue Collar Country,” Dakota delivers his unique blend of country rock highlighted with banjo and fiddle that build on his influences as diverse as Travis Tritt, Bob Seeger and The Marshall Tucker Band.

He has had a guitar in his hands since he first picked up one at the age of seven and strummed along to the sounds of Ray Charles, Johnny Cash, Patty Loveless and Merle Haggard wafting from the family stereo.

Excitement is what a Dakota Poorman live show is all about, and listeners can latch onto that exhilaration in his single, “American Made,” that he wrote alongside band guitarist Scott Reeves and producer Malcolm Springer. The track, that premiered in August 2021, jumped into the MusicRow Breakout Chart and No. 68.

Arriving Nashville for Country Radio Seminar after a string of gigs in Texas and Oklahoma, Dakota told me how “American Made” came about.

“We were all sitting around in the studio doing pre-production and seeing what kind of song ideas we had,” he said. “Malcolm, my producer, wanted a kind of AC/DC country, feel good song. Something about the USA we could be proud of. We were going through some dark times with Covid and everyone was just kind of turning on one another. We felt we could just use a good American song that could bring people back together and make us feel good again. It’s a down-home party song that’s ‘red, white and blue collar.’”

He talked about the writing process for the song. “I just put pen to paper and it flowed right out. I mean we probably took like an hour and a half to write the song. It was just the flow of the song that made it so easy to write.  It was something that I’ve dealt with from experience, playing shows, drinking a six-pack, just having a good time. Just getting rowdy with your friends on a Saturday night.”

He said that audiences try to sing the lyrics along with him, even though it’s a “fast, word-spittin’ song,” as he described it. He added, “Just seeing people sing my songs back to me, that’s what it’s all about. It makes you feel good.  It’s an amazing feeling that money cannot buy.”

Dakota’s next single is titled “Hippie @ Heart” and Dakota talked about the origin of the song that happened when he was sitting in a friend’s garage, just hanging out one night.

“They’d just put their kids to bed so we were having ‘parent time’ and we were talking about songs and what’s the next step for me in Nashville and all that stuff,” he recalled. “His wife came out and said, ‘You should write a song called ‘Hippie at Heart.’ And I thought that was a great title.”

A couple of days later, Dakota took her idea and went down to his parents’ place in Maple Valley. Part of their barn has been renovated to make a room out of two of the former horse stalls, and Dakota uses that room as a writing sanctuary.

“To be honest,” he said, “I lit up a giant doobie, smoked half of it, started writing and in forty minutes I came out with ‘Hippie @ Heart.’  It was from what I grew up with, listening to Pink Floyd and so on.  It’s just a modern day ‘weed honky-tonk’ song which is funny because being from Washington State, where weed is legal, I took it and ran with it.”

He says that “Hippie @ Heart” is one of his favorite songs to play. “People love it,” he says.  “They love to see the edginess of it and hear the rawness.  It’s almost like Bob Seger’s ‘Night Moves’ meets country.  It’s something that I hold near to my heart because of the experiences I had growing up and that’s what shaped the song to what it is.”

With a proven track record of drawing enthusiastic fans to his exciting live shows, along with opening for acts like Marshall Tucker, Dustin Lynch and Jon Pardi, Dakota Poorman is about to burst on the national stage with his upcoming single, “Hippie @ Heart,” coming in April 2022.