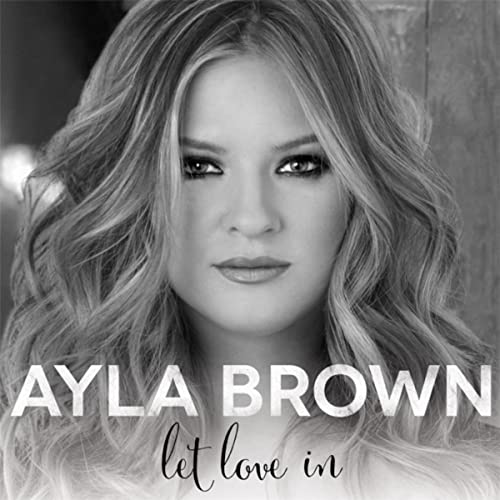 Ayla Brown, born 1988 in Massachusetts, is a real all-rounder, because besides being a good musician, she is also a gifted basketball player.

Her career began in a sporting way. In addition to various other awards, she was also voted the best female basketball player in her state.

In 2006 Ayla took part in the TV series “American idol” (comparable to “Germany Is Looking For The Superstar”) and made it to the last 24 participants.

With this exposure behind her, she went on a promotional tour across the United States and recorded her first album “Forward”, which was recorded in just over a week and reached number 34 on the Billboard Adults Contemporary Charts.

With the election of her father as Senator from Massachusetts in 2010, Ayla Brown gained even more media attention, in the same year the EP “Circles” was recorded and appearances in front of American soldiers in Afghanistan followed.

Moving from Boston to Nashville in early 2011 meant switching from pop to country. For her first country album “Ayla Brown” she co-wrote 7 of the 9 songs on the EP “Heroes and Hometowns” from the same year is a collection of patriotically inspired songs.

Besides being a studio musician, Brown is also active as a musical performer and official ambassador for the Philadelphia 76ers.

The third studio album “Let Love In” to be discussed here was released in 2015 with commercial support from the American restaurant chain “Texas Roadhouse”.

After a few bars, the pleasant voice of the singer is impressive upon first hearing, and the first two rock songs spread the same good mood, but with the wonderful country ballad “Mr. Right” Ayla Brown proves that she can also master the quieter tones.

“Squeeze” and “I Just Wanna Be Your Baby” seem like a perfect soundtrack for cruising on country roads. The singer comes across like a real rocker on the subsequent “Loose Ends”, with the hammering but sparingly played bass and guitar drive the sound.

“I Wanna Kiss You Too” and “Plane Ole Me” offer pleasant country pop, with “That Morning Never Came” being a sentimental love song. The emotional turbulence in “Turbulence” doesn’t seem so convincing musically, but “Can’t Run Away” with a beautiful steel guitar makes up for it.

“Stupid Me” is one of the rocking pieces on the album that make the best impression because of the vocal presence of the singer, while the CD ends quietly with the slow “Shadow”.

“Let Love In” sounds good overall, but somehow the work lacks highlights. Ayla Brown should put at least some tracks with hit potential in her next album.