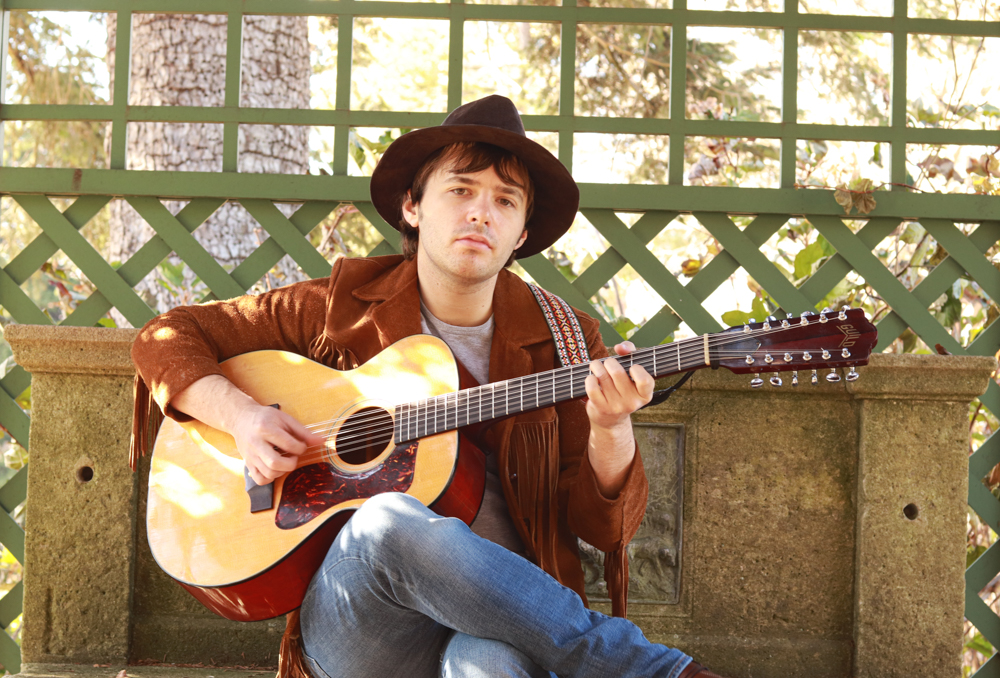 Andrew
Weiss: I would describe my music as “power pop-icana.” It is my own
spin on the early 1970s Laurel Canyon folk rock sound mixed with the
sound of late 1970s power pop. I have always loved those two styles of
music, and the idea since the beginning of Andrew Weiss and Friends has
been to have those sounds live together. My mantra has always been the
songs have to come first. From there, it becomes about how to capture
the songs in a recording so that the meaning translates to the listener.
I have a really great circle of musicians who play on my records along
with me, and we actually recorded this new album live to analog tape.
Recording that way is a really honest way of making music, and that has
always been really important to me. I want it to be clear that when you
listen to my songs, you’re hearing something real and pure. The songs
and the recordings are coming from a genuine place that I hope the
listener can feel.

Lamitschka:  Do you write the songs yourself? If not, how do you go about finding the songs for your album?

Andrew
Weiss: On our first album The Honeymoon Suite, I wrote all of the
songs. A couple of those songs had been around as early as 2 years
before then waiting to be finished, but most of them were written during
the exciting time of the new project starting to form. On the new
album, I wrote 11 of the 12 songs on the album myself. “The Morning
After” was a co-write between myself and Amir Mortezai. I met Amir while
we were in college together, and during that time we wrote a few songs.
One night, we were driving back after seeing a concert, and he put on
this song he had been working on. It was a 9 minute instrumental piece
that he didn’t quite know where to take it from there. I loved it the
minute it started, and when he asked if I had any ideas, I told him I
would love to work on it. Over the next few days, I re-shaped the song,
cut the piece down from 9 minutes to 4 minutes, wrote lyrics, and added
to the melody. We were both really happy with it, and I considered it
one of the best lyrics I had ever written. However, the song sat there
for 3 years until I remembered it while we were recording the new album.
I really wanted to bring it back, so we recorded it, I wrote a string
arrangement for it, and it’s one of my favorite songs on the album. 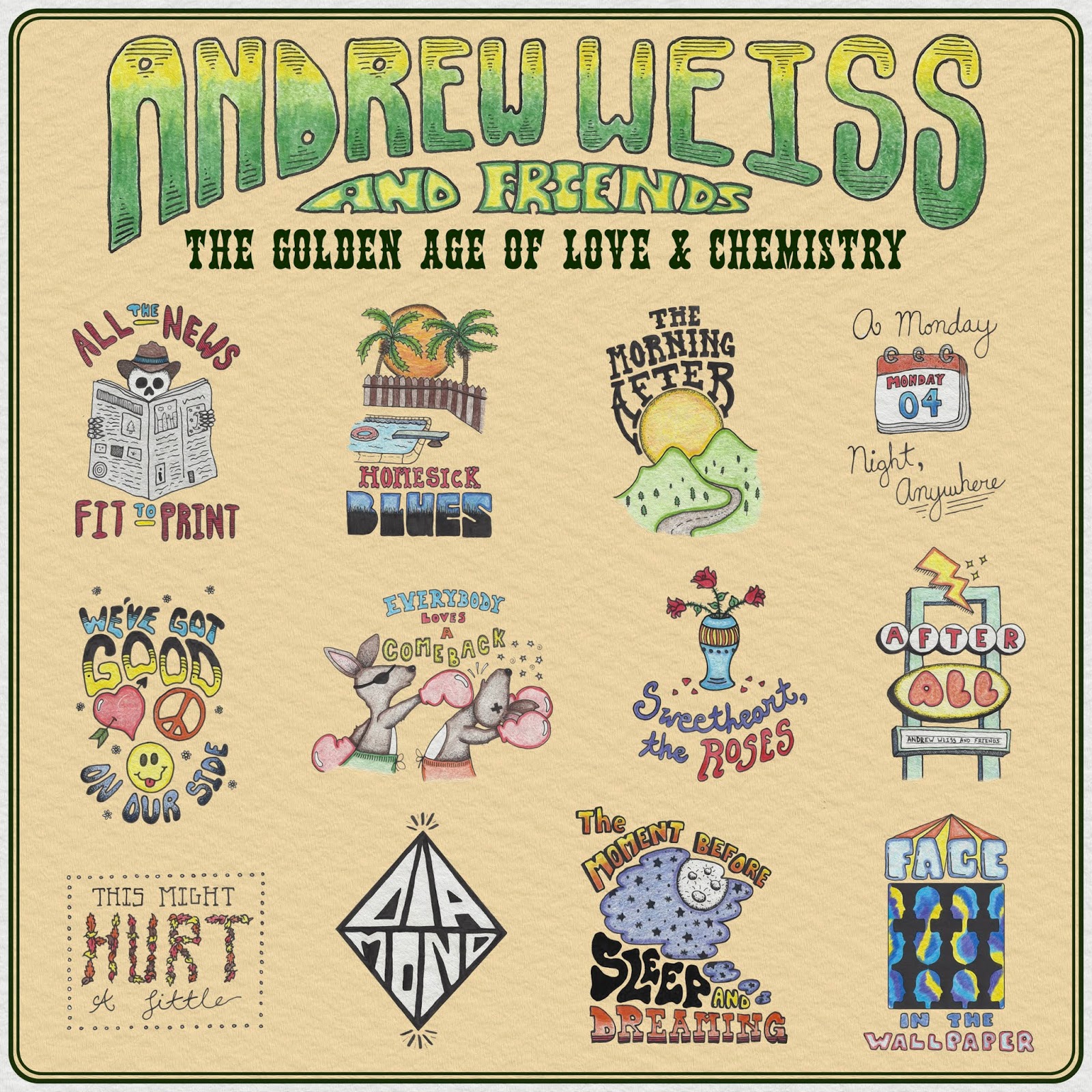 Andrew
Weiss: I always listened to so much music from a really young age. A
lot of times growing up, staying home and listening to records was more
appealing to me than going out with friends. My musical roots come from
the music my family played when I was growing up. My parents played ELO,
the Rolling Stones, Elton John, and Def Leppard around the house, and
my uncle changed my life when he introduced me to the Abbey Road album
when I was two years old. Taste changes over the years, but I am lucky
that the music I always loved seems to be timeless, and I still don’t
get tired of listening. Over the past few years, some of the
bands/artists that have inspired my songwriting are Tom Petty and the
Heartbreakers, Buffalo Springfield, Cheap Trick, The Byrds, Neil Young,
and Bob Dylan.

Andrew
Weiss:  It was actually a specific song that inspired me to become a
songwriter, and that song was “Purple Haze” by the Jimi Hendrix
Experience. My uncle plays guitar, and when I was seven years old, he
would come over to the house a few times each week to play music. We
would mostly play Beatles songs, but he would also show me songs that he
wrote when he was a kid. After a few weeks, I realized that maybe I
should try to write a song so I can have something to show my uncle too,
but I didn’t quite know how to do that yet. There was a Def Leppard
documentary on TV at the time (another band that was an influence on
me), and in that documentary, there was a scene where they were playing
“Purple Haze.” I had never heard the song before and thought it was
incredible. I called my uncle up the next day, and I sang “Purple Haze”
to him, presenting it as a song that I had written. Of course, he knew
the song and knew that I didn’t write it. He explained to me that
writing a song involved coming up with something that didn’t already
exist. It became obvious to me then that this was something I really
wanted to try, and within days, I started writing my own songs.

Andrew
Weiss: I’d say the main difference is the pacing of the songs
collectively. The songs on our first album are mainly acoustic based.
Sometimes on the record, there isn’t even an electric guitar on the
track, and when there is, it’s only one. The album was purposely crafted
this way, because I was going for a certain sound, which I think we
achieved. In fact, it’s one of my favorite albums I’ve ever been a part
of, for that reason: I wouldn’t change anything about it. I stand by
every note on that album, which is something I can say because it has
been out for a year and a half already. However, when we started playing
the songs live, I missed having some rock n roll songs in there that we
could boost the shows with. So when I was writing songs for the new
album, I tried to keep that in the back of my mind.

Andrew
Weiss: The new album is called The Golden Age of Love & Chemistry
because I believe that is true for the time we live in. Not long before
this album, I got engaged to my high school sweetheart, and that became
the theme to some of the songs written during that period. Also, during
the writing of this album, I began to notice all of these news headlines
about the advances being made in science, used for good and bad. The
juxtaposition of that with the theme of love was really interesting to
me, and once I realized that the album included songs with both of those
themes, I thought it would work as an album title. Of course the words
“love” and “chemistry” are also related to each other when you’re
talking about two people who have chemistry with each other, and as a
result, they fall in love. So it can be seen in that way as well.

Andrew
Weiss: It’s always really hard to pick a favorite song, as most
songwriters will tell you, but there is something really special to me
about the song “We’ve Got Good On Our Side” from our new album. I had
been writing a song a day during that time, and my fiance had asked me
to write a song about the current state of the world. It was a task
easier said than done because sometimes those kinds of songs come off as
being insincere. But I am really proud to say that friends who have
heard “We’ve Got Good On Our Side” have been positively uplifted, and it
seems to be the one that people come talk to me about after shows. I
wrote that song about the disconnect that humans seem to have these
days. The art of conversation is sadly not what it used to be because of
technology, and this song is a kind of prayer that one day we can
realize the importance of real human relationships. It was one of those
songs where after writing it, I felt that it became bigger than me. It’s
message is important, and I hope when people hear it they feel the
longing for connection.

Lamitschka:  What’s your favorite song by another artist that you wish you could have recorded?

Andrew
Weiss:   I could answer this question many different ways, but today I
wish I could have recorded “Nowhere Man” by The Beatles. Putting aside
that the song is beautifully written, the song is also beautifully
recorded. I stand by the idea that before a song can be recorded, it
should be able to resonate with someone by just playing it with an
acoustic guitar or piano. Once that happens, you have a nice base to
produce the rest of the song. In the case of “Nowhere Man” the
production is very simple. Drums, acoustic guitar, bass, and an electric
guitar that pokes in and out. On top of that, those lush harmonies that
carry the song are so important. In my mind, there is no other song
like it, and nor could there be. When I produce records of my own songs,
I sometimes have in mind a reference track of a sound, or a feel, to
better articulate what I would like to hear. There have been many times
when I have referenced the Rubber Soul album for the way that the sounds
on that album really allow the songs to breathe and speak for
themselves without interruption.

Andrew
Weiss: At the time of this interview, our next single is going to be
released on February 28th, and it is called “Everybody Loves a
Comeback.” The song was written about redemption, and it questions the
idea that people who mess up deserve a second chance.

Andrew
Weiss: Not to sound too corny, but the magic of songwriting is what
drives me. To enter a room with nothing but a guitar or piano, and to
come out with a song is an excitement that never wares off for me. And
then to perform that song for somebody and for the song to move that
person emotionally is priceless.