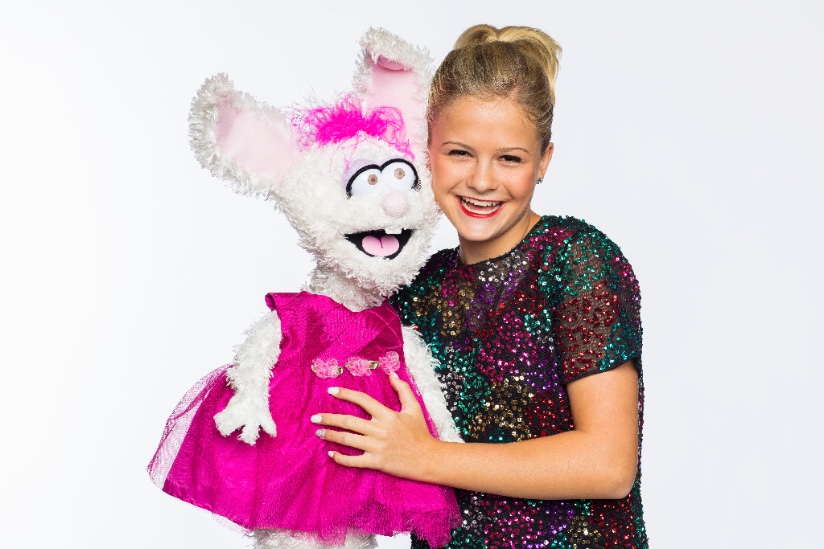 ANNOUNCES FRESH OUT OF THE BOX TOUR

Fourteen-year-old, singer/ventriloquist Darci Lynne Farmer continues to capture the hearts of fans across the country after winning NBC’s “America’s Got Talent” (AGT) by
the most votes for a final performance in the history of the show at
just 12 years old, one of the youngest contestants ever to do so.

She is currently wrapping up her first-headlining Darci Lynne & Friends Tour,
the blockbuster 40-city+ tour has taken the young dynamo to cities
across the country including Atlanta, GA; Nashville, TN; and Chicago,
IL. On the heels of that success comes word that the powerhouse vocalist
and entertainer with talent beyond her years will be hitting the road
in 2019 for her Fresh Out of the Box Tour. The
18-city tour will kick off on Feb. 15 in Pennsylvania and span coast to
coast with stops in Seattle, WA; Austin, TX; Cincinnati, OH and Newark,
NJ.

Next year will also find Darci returning to NBC’s AGT franchise for the first-ever “America’s Got Talent: The Champions”
season. Some of the most incredible and memorable “Got Talent”
contestants from 184 countries around the world will return to the stage
and compete for the title of AGT Champion. The new spin-off series is
set to premiere Jan. 7, 2019 on NBC.

But fans don’t have to wait until 2019 to see Darci Lynne as the holiday
season is packed with activity for the Oklahoma native. She will star
in her own NBC holiday special, “Darci Lynne: My Hometown Christmas.”
The one-hour television event will be filmed at the historic Alex
Theatre in Glendale, Calif., and feature festive performances with
special musical guests and heartfelt visits to her hometown, infused
with the unique comedy that only Darci and her characters can bring to
life. A December airdate and special guests will be announced
soon. Darci will also embark on her first ever holiday tour, Rocking Around the Christmas Tree with Darci Lynne and Friends. Tickets are available now at

Tickets for the Fresh Out of the Box Tour will go on sale to the general public on Friday, Oct. 26 at 10 a.m. local time via

Fresh Out of the Box Tour Dates:

Winning NBC’s “America’s Got Talent” at just 12-years old by the most
votes for a final performance in the history of the show,
singer/ventriloquist Darci Lynne Farmer impresses audiences across the
country with her sweetheart disposition and undeniable, show-stopping
talent beyond her years. Accompanied by her musical friends including a
divaesque rabbit: Petunia, a shy and soulful mouse: Oscar and a
sarcastic old woman: Edna. Singing through her friends helped the young
entertainer find a voice inside she didn’t know she had and helped her
overcome a lifelong struggle with shyness. An Oklahoma native, Darci
began participating in talent-based pageants at a young age and picked
up ventriloquism shortly after. Two weeks later, Darci began tackling
talent shows, eventually making it to the biggest talent show on
television, NBC’s “America’s Got Talent.” Following her big win, she has
been featured on NBC’s “Little Big Shots,” Food Network’s “Kids Baking
Championship,” “Ellen” and “TODAY.” Her first Christmas special “Darci
Lynne: My Hometown Christmas” will air on NBC this December. Darci and
her friends are continually on the road bringing smiles to audiences
across the country. In 2019 Darci is set to appear on NBC’s spin-off
series “America’s Got Talent: The Champions” premiering Jan. 7 and will
hit the road for her Fresh Out of the Box Tourin February. For dates and the latest information, visit