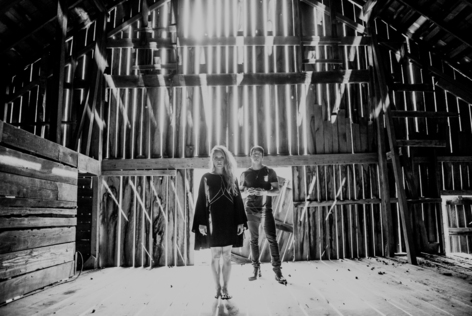 AMERICAN YOUNG DELIVERS SELF-TITLED DEBUT AUGUST 5 VIA CURB RECORDS
3 Million Spotify Plays In Its First Month, Global Touring and
Launch of 12-Track Album Co-Produced by Lee Brice
In a classic case of “opposites attract,” American Young finds two
celebrated songwriters — Kristy Osmunson and Jon Stone — joining forces,
bringing together a set of influences that run from classic country to
modern pop. The result is American Young’s genre-bending debut album, a
self-tiled record filled with everything from entwined harmonies and
fiddle solos to digital samples.
“Jon’s a perfectionist and a finisher,” explains Kristy, a
classically-trained violinist who crossed paths with her future bandmate
at a Lee Brice performance in Nashville. “He works harder than anybody I
know. I’m all about the vibe and the feel of the moment.”
Jon’s creative journey includes co-writing Lee Brice’s Number 1
single “A Woman Like You” and collectively, as songwriters, they have
written not only 11 of the 12 tracks on the album but hits for artists
including Kenny Chesney, Blake Shelton, Rascal Flatts, Joey + Rory and
more.
Jon and Kristy couldn’t be more different — she drives a Chevy
Volt, he rides a Harley; she grew up surrounded by miles of country
wilderness, he was raised in the city — but the two complement one
another, turning their 180-degree differences into a perfect circle.
“The thing that’s so inspiring for us both is that we’re so
different,” Jon adds. “Everything that drives me crazy about her makes
her a star. She’s everything I wish I could be, but once we’re together
we’re like Voltron. It becomes selfless; all our needs become secondary
to American Young.”
From “Point of View,” whose lighthearted back-and-forth brings to
mind John Prine and Iris Dement’s “In Spite of Ourselves,” to the debut
single “Love is War,” which combined drew a breathtaking 3 million
Spotify plays in just 45 days, the self-titled American Young offers up
12 duets that are emotional one minute and electric the next. Lee Brice,
the band’s close friend and co-producer, makes an appearance on
“Eighteen,” a nostalgic song about rekindling old memories and older
relationships. A link to pre-order the album is
here:  http://smarturl.it/AmericanYoung
Releasing August 5 on Curb Records, American Young’s debut will be
supported by a string of American and international shows, with the band
spreading their brand of country music far beyond their homeland.
Follow American Young on Social Media:
https://www.facebook.com/AmericanYoung/
https://twitter.com/american_young
https://www.instagram.com/americanyoung/
https://www.youtube.com/user/AmericanYoungMusic
http://www.americanyoung.com/