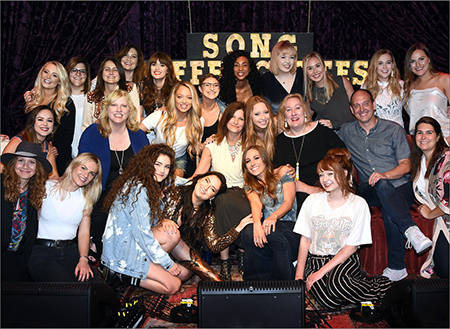 “Since
its inception over four years ago, Song Suffragettes has always been
about providing the opportunity for women to be heard,” says Todd
Cassetty, founder of the esteemed singer-songwriter series. “Our fourth anniversary
show was a celebration of those female voices and we couldn’t be more
proud of the 10 women who took our stage and the industry leaders who
came out to speak about the ongoing gender disparity in country music.
As we say at Song Suffragettes, #LetTheGirlsPlay!”

Since
Song Suffragettes first made their debut four years ago, they have
grown to become the Listening Room Cafe’s largest weekly sold out show.
Each show airs live on Periscope with as many as 28,000 viewers per
week. The Song Suffragettes performances have featured guest appearances
from Lauren Alaina, RaeLynn, Lindsay Ell, Kelsea Ballerini, Deana
Carter, Jesse James Decker, Jamie O’Neal and more. Nine suffragettes,
including Carly Pearce and Jillian Jacqueline, have received record
deals and 37 women have received publishing deals, including Kalie Shorr
and Abby Anderson. The group has been featured by the Washington Post, Billboard and USA Today, and was most recently featured in this Tennessean article.
Song Suffragettes has performed at Tin Pan South, Project Music,
Bentonville Film Festival and CMA Fest. You can keep up with Song
Suffragettes on their website at www.songsuffragettes.com.

Song Suffragettes
is a collective of female singer-songwriters that performs every Monday
night at The Listening Room Café in Nashville, TN. In just over four
years, Song Suffragettes has showcased over 200 talented women out of
over 1,300 who have submitted to play the showcase. With weekly
sell-outs and a mantra of #LetTheGirlsPlay, Song Suffragettes vocally
combats wide-spread discrimination against women in the music industry
by giving female talent a place to play, grow and evolve with fellow
creatives.  Since its inception, 9 Song Suffragettes women have gone on
to receive record deals and 37 have landed music publishing deals. With
over 2.2 million views on their YouTube channel, Song Suffragettes was
recently named by Billboard magazine as one of “Next-Gen
Nashville: 16 People, Places and Things Shaking Up Music City”.
Featured in USA Today, Washington Post, Grammy.com, Boston Globe and
more, Song Suffragettes continues to fight for female talent to be heard
throughout the country and beyond.